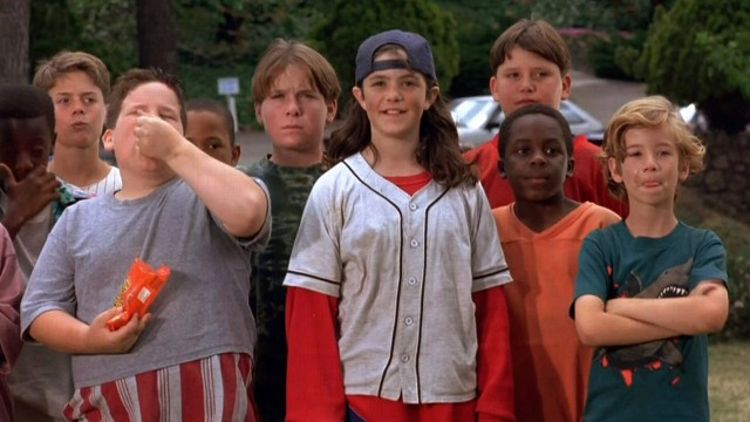 The greatest play in football history was not drawn up by Vince Lombardi, Bill Walsh, or Chip Kelly. It was diagrammed by a boy genius named Nubie in 1994 and is called The Annexation of Puerto Rico, a modern spin on the fumblerooski. (Naturally, Ron Rivera — who is a solid decade or two behind the curve on gridiron strategy — used it in 2011 against the Texans.)

While Nubie deserves all the credit in the world for devising such an unbeatable play, it’s telling that he did so in a cinematic classic, Duwayne Dunham’s Oscar-snubbed Little Giants, as opposed to reality. (Dunham is not Lena’s rambunctious little brother, but I like to pretend he is.) Without fail, everything works better in fiction than in real life, and likewise, your fantasy roster looks wayyyyy better now on paper/megapixels than it’ll prove to be this weekend. (EDIT: Unless you have Peyton Manning. Then your team is FLAWLESS.)

To wit: This time last year, I was amped to own Brandon Lloyd and Titus Young. Lloyd’s league-leading 1,448-yard 2010 season was still fresh in everybody’s minds, and the thinking went that teaming up with Josh McDaniels (who he thrived under in Denver) and Tom Brady (his first above-average quarterback ever) would be a massive boon for his fantasy value. Of course, he ignominiously finished 28th in fantasy points among receivers in 2012, which somehow understates how awful his season really was. Look at it this way: Despite Wes Welker’s departure, Gronk’s thousand or so surgeries, and Aaron Hernandez’s arrest, Lloyd remains a free agent and the Patriots have absolutely no interest in re-signing him. This probably has something to do with his maddening penchant for making all the spectacular, highlight-reel catches while flubbing many of the easy ones, but I digress. As for Young … well, yeah.

Anyway, there are surely owners out there counting on productive seasons from Josh Gordon or Lamar Miller or Aaron Rodgers, and perhaps their expectations will be met. But there’s also a chance they end up emotionally devastated by the sad truth of Brandon Weeden’s mental capacity, Miami’s offensive line, or a freak injury. Rodgers might have been an incredible steal for you in the second round, but it won’t matter if Aldon Smith comes plowing into his knee at an inopportune angle on Sunday. These are the vagaries that govern fantasy football, and they either make the game a fun/lucrative office time-suck or pure hell, depending on your perspective. Since your team is already set (let’s face it: Blockbuster trades are rare, and waiver-wire claims are mostly inconsequential), the least you could do is accept these realities and enjoy watching the games. While I’ve never been able to do this myself, I hear it can make football season much less stressful.

1. The Jets named Geno Smith their starter … for now. Take it away, Woody Johnson: “We’re having a competition between quarterbacks, and that competition isn’t finished.” This is where I’d normally invoke the football adage that goes “if you have two starting quarterbacks, you don’t have one,” but it would be mathematically incorrect here because it suggests that Mark Sanchez and Smith’s net effect on the Jets is nil. In fact, they carry a value of minus-21, which I determined by subtracting Carson Palmer’s 2012 QBR from Sanchez’s. Moreover, the fact that Johnson is publicly commenting on the Jets’ QB debacle days before the season opener confirms many of the suspicions folks had about his organization’s infrastructure, although I guess someone had to keep the media abreast of things while Rex Ryan was off crashing keggers at Clemson.

2. And in other Bad Quarterback League news, Terrelle Pryor is starting for the Raiders. Which means that for the second consecutive season, Matt Flynn was given every opportunity to start and failed miserably. Where will he take his talents to next? Probably Jacksonville, where he’ll lose out to Denard Robinson in epic fashion. But seriously, between the Jets, Raiders, and countless other potentially historically dreadful quarterback situations, I’m beginning to support the idea of a defense-by-committee. For instance, this week you can pick up the Colts D/ST (available in 93.4 percent of ESPN.com leagues!), who happen to face the Raiders, and profit from Pryor’s inevitable pick-six. It’s that easy!

3. Brian Urlacher admits faking injuries is a common practice in the NFL. This isn’t all that surprising, but it should send a shiver down the spine of LeSean McCoy owners. I can see it now — the Eagles moving down the field at a breakneck pace, Matt Barkley hoisting one of those hilarious play cards, Kelly busting out his trademark smirk, and out of nowhere London Fletcher keels over in a Varejao-esque performance, providing the Redskins with enough time to straighten themselves out. The Eagles offense grows stagnant, and McCoy never sees the end zone. On the replay of Fletcher’s flop, Jon Gruden laughs it off as “gamesmanship” while you suffer in silence.

4. Sam Bradford is really, really excited to start the season. My general stance on player/coach quotes is that they are completely meaningless and harmful to the English language — making someone watch a Bill Belichick press conference is basically a form of cruel and unusual punishment — but this is a rare exception. The Rams’ Les Snead–led rebuilding effort has been impressive, as exemplified by their suddenly formidable group of pass catchers, so it makes perfect sense for Bradford to be brimming with enthusiasm. Start deep threat Chris Givens, who went beast mode on the Cardinals last year and has been turning heads in the preseason, but keep unknown commodity Tavon Austin on your bench unless you’re supermodel-thin at receiver or playing in a 16-team league.

5. Darrelle Revis is sharing the Jets’ secrets with his Bucs teammates. Oh, snap! I guess that means no magnificent debut for Smith, no 100-yard day for Bilal Powell, and no return to glory for Kellen Winslow. Better luck next week against the Patriots!

5 Guys Who Will Exceed Expectations

Based on his Monday Night Football track record against the Redskins, you’d think Vick could get some damn respect this week! Whatever. Vick’s healthy, and I think Kelly’s offense is gonna flabbergast opposing defenses, especially early on while little-to-no tape exists of it. Spiller will be Week 1’s top-scoring running back, because keeping the ball out of EJ Manuel’s hands is how Doug Marrone will try to keep the ball out of Tom Brady’s hands. By rule, however, the Bills must surrender the pigskin to New England when they score, and Brady will make the most of those opportunities. As such, look for a Moss-caliber debut from Amendola, because heck, he’s gotta be healthy for the season opener, right? Meanwhile, it doesn’t take an oracle octopus to know the Colts will annihilate the Raiders, a result that would presumably include multiple trips to the end zone for Wayne. Ponder’s not good enough to seamlessly adjust to a new receiving corps, so prepare for some growing pains with Cordarrelle Patterson and Greg Jennings. He’s familiar with Rudolph, though, and it’ll show against the Lions’ questionable secondary, particularly in the red zone.

5 Guys Who Will Underperform

The Packers’ defense will be out for blood against Kaepernick after being embarrassed by him in the playoffs, and even Jim Harbaugh is worried. According to my research, this is the first time Harbaugh has felt fear, so don’t take this lightly. Furthermore, I don’t see a coaching staff as relatively competent as Green Bay’s getting torched by the same offense in back-to-back games, and the loss of Michael Crabtree doesn’t help matters. (Ultimately, I think Kaepernick will be fine without him, but it might take a game or two to completely adjust.) Gary Kubiak plans to limit Foster’s workload on Monday night, Wallace has the misfortune of facing Joe Haden, and 5-foot-9 Smith vs. Seattle’s hulking, Adderall-aided secondary is just a bad matchup, so anticipate modest numbers for all three. Finally, as far as offensive geniuses go, the drop-off from Rob Chudzinski to Mike Shula is enormous, and Olsen will feel the brunt of that.

Good luck to everyone this weekend (except, of course, if you’re in a league with me), and remember: When the going gets tough, the tough pick up Terrelle Pryor minutes before kickoff and pray for garbage-time rushing points.