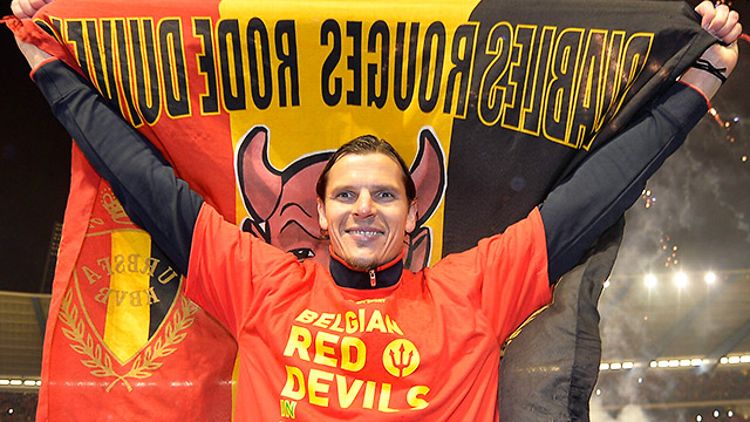 In retrospect, I should have seen the warning signs. The mission didn’t seem difficult: Watch Belgium play among a mass of cheering, flag-waving, jersey-clad Belgians. I was going to be in Belgium, after all, which is in Europe, which means — rash generalization — people love soccer. But I saw more Los Angeles Lakers hats than pieces of Red Devils apparel during the three hours I spent wandering around downtown Brussels on Tuesday morning. There were more Brooklyn Nets logos, too. Which is to say I didn’t see a single Belgian wearing anything even remotely resembling soccer paraphernalia. That was surprising, seeing as they had a game in less than 12 hours in the very same city.

To be fair, the match against a Gareth Bales–less Wales didn’t much matter. Belgium had qualified for the 2014 World Cup last Friday courtesy of a 2-1 victory in Zagreb, Croatia. The win, added to the seven victories and two draws before it, clinched a trip to Brazil for Belgium’s golden generation, which will be as much of a dark-horse contender as one can be when the world is saying you’re a dark-horse contender — for many good reasons, namely Simon Mignolet, Thomas Vermaelen, Kevin De Bruyne, Marouane Fellaini, Eden Hazard, Mousa Dembélé, Romelu Lukaku, Kevin Mirallas, Vincent Kompany, etc., etc., etc. Belgium is ranked sixth in the world, up from 30th just a year ago. This is a team on the rise, and everyone knows it.

And yet, the nation of 10 million — or at least the small slice I encountered on Tuesday — seemed relatively unconcerned by the upcoming affair. I’m not sure what I expected, exactly, but this wasn’t it. On the train between Brussels and Kortrijk, a town of 70,000 in the northeast, a middle-aged man with three colored pens tucked into his messenger bag read the local sports paper, which featured coverage of the game. But honestly, he seemed more interested in the female judoka who tested positive for cocaine. I was planning to ask him about his interest, but the conductor booted me out of first class before I could inquire.

After reaching Kortrijk, formerly a textile center that now specializes in 3-D gaming, I asked the desk manager at the hotel where I should watch the game. “The Irish Pub,” he replied, circling a location a few clicks away on my tourist map. Of course he did. I was discouraged and hadn’t slept in 24 hours. I went upstairs to take a nap.

At 7:30 p.m., 90 minutes before kickoff, I arrived at the Irish Pub to find it emphatically closed. I soldiered on through Kortrijk. I resisted the the urge to enter the Hoochie Coochie even though I was rapidly reaching the point in the story when I was more about experiences and less about actually watching the game. After passing the 10th bar with either a Stella sign, a Duvel sign, or both, but not a single television, I decided to go into the next one I found and get a drink.

Sean, the bartender at a tiny corner spot just off the main square, handed me an Omer — the local blonde beer brewed just a few miles away by a fifth-generation first son named Omer — and told me some things. For one, the Hoochie Coochie was one of his favorite places in town, a laid-back joint with jazz and blues on the stereo and exposed wooden beams supporting the ceiling. The Irish Pub, on the other hand, was terrible. And, most importantly, any screen would be turned to the Belgium game later. All I had to do was find one.

As I sipped my drink, another patron overheard Sean and I talking about soccer and began a spirited discussion about where Belgium would be ranked in the next FIFA poll. At least I think that’s what he said. All I could make out was something about third, something about Sweden, and a lot of passion. “Belgium has a team!” the gentleman said as he departed the bar to watch the match somewhere else. It was hard to tell if this was enthusiasm about the existence of the squad, the talent on said squad, or the Oban he had been drinking. Perhaps all three. He was the first person who showed an unprompted interest in the Red Devils all day.

The citizens aren’t apathetic, but they are far from rabid. It’s understandable. Belgium, which holds the record for the longest period without a government, is a divided country. The national team goes by one of three nicknames, depending on what language you speak: Diables Rouges, Rode Duivels, or Rote Teufel.

Nationalism is not popular. Nor is the soccer team. Two years ago, a survey conducted by the Royal Belgian Football Association “discovered that people had even less faith in it than they did the nation’s banks.” The squad, which hadn’t reached the World Cup since 2006 or the Euros since 2000, was 68th in October 2009, 62nd in October 2010, and 37th in October 2011. In other words: bad and sad, a death wish for an international football team.

What did they do? They hired a marketing agency, Boondoggle, which devised a re-brand. They used social media and other tactics to become something other than losers. Vincent Kompany, one of the most intelligent players in the world, led the way, convincing his teammates of the importance of the initiative. The turnaround isn’t complete, but it’s coming. The maturation of once-in-a-lifetime talent helps, too. Marketing solves many issues. Winning fixes the rest.

I left Sean and slipped into a bar he recommended down the street. It was busy although everyone looked barely 18, a typical high school night out except that the national team happened to be playing on the screen. Some teens in the bar watched, others chatted in groups. Bocker was two for 2 euros, a happy hour special, according to the bartender. It was 9:30 p.m. and the people were happy even though it was 0-0.

I was sitting at a barstool when someone in a G-Star Raw knockoff jacket and ear buds in his ears came to order some drinks. He reeked of cigarettes, seemed rather drunk, and was quite likable.

“Don’t worry,” he reassured me, clearly mistaking my focus on straight posture for concern.

“The team looks like they don’t care,” I said, because, well, they kind of didn’t and I couldn’t blame them. “Do they?”

“Can you win the World Cup?”

“Maybe the opponent gets more chances, but we score on one. That’s all we need. We are world champions,” he said as this scenario played out in his head. “Maybe.”

My new friend’s half a dozen Bockers arrived. He flipped 6 euros on the bar, took the pale beers, and walked back to sit with his buddies, his back to the big screen.

Filed Under: Noah Davis, We Went there