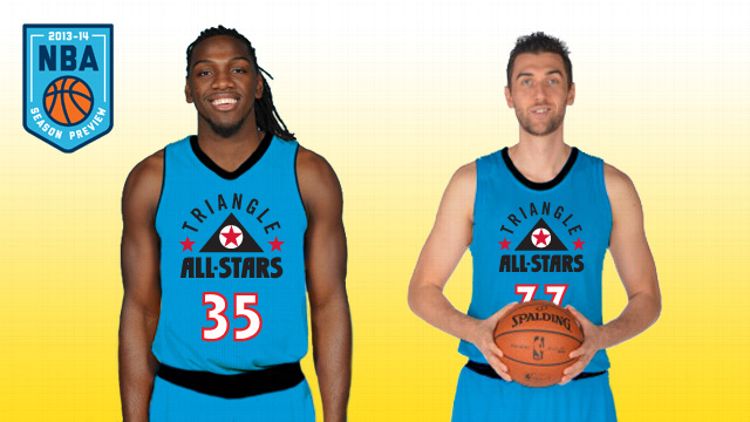 Compiling the Triangle NBA All-Stars offers a way for us to celebrate the players we love way too much. You can see the other entries in the series here. Check out the latest additions, Andrea Bargnani and Kenneth Faried, below.

Why We Love Him: Kenneth Faried only has one gear. Some people have a first gear, some have a second or a third. Faried’s gear is called “I AM A CONDOR.” He knows only how to soar.

It doesn’t matter if it’s the playoffs and he’s playing on one leg or if he’s playing in the glorified exhibition game that is the Rising Stars clash during All-Star weekend. Kenneth Faried flies high. Everybody else came to chillax? Kenneth Faried came to score 40 points.

Also? His shoe game was strong that night.

Ever since he got his shot, replacing an injured Nene in the Nuggets lineup back in the spring of 2012, Faried has been a breath of fire in this league. No plays off, no games off, he just goes hard every night. It’s so awesome to see. The Nuggets could be playing the Jazz on a Wednesday in November, and he will be throwing himself around, leaping for boards, and going for the Medal of Honor. Not even the flu can stop him. Last December, he was so sick he puked into a towel, much to the dismay of Kosta Koufos and Ty Lawson!

And he still messed around and got a double-double!

Anecdote That Only Makes Us Love Him More: My head says we need to shout-out the touching video he made with his mother and her wife supporting marriage equality in Colorado. My heart says we need to go back to this amazing video of a quite toasty Faried taking TMZ on a trip around Magic Mountain. So some TMZ journalism truth warrior spots Faried outside of a bar or club and starts asking him very generic questions when it becomes apparent he has no idea who Faried actually is. Faried’s crew loves this. (“Do you just go up to any black guy?” “Did you think he was 2 Chainz?”) There’s some talk about Faried’s confidence in his manhood, and then the interview ends with, “Power forward. For the Denver Nuggets. My name is Kenneth BLEEP Faried.” Someone get this guy a podcast. Just make sure there’s Coconut Cîroc.

GIF or Video Evidence of His Supremacy: Ask Dwight Howard!

Final Word/2013-14 Prediction: It’s a new day in Denver, with Brian Shaw replacing the man who gave Faried his shot, George Karl. It’s natural to fear that with the system change Faried’s game will also change. Shaw is going to slow things down a little, hoping that an increased commitment to defense and interior offense can make the Nuggets a viable playoff team. It might take some getting used to, both for players and fans, but I think this is ultimately going to be a good thing for Faried. Shaw is known for developing talent (he is given a ton of credit for Lance Stephenson’s leap last season in Indiana), and Faried has a ton of that. There’s no reason to doubt that Shaw couldn’t work some magic and make Faried a legit, All-Star-caliber power forward. And besides, how boring can a frontcourt of Manimal and JaVale McGee really be?

Why We Love Him: Bargs! First and foremost, we love him because it’s going to be so much fun to watch him play all year and scream out “BARGS!” every time he does something well. We also could’ve done this the past seven years, I guess, but then we would’ve had to watch Raptors games.

Bargs has been lost at sea on a rudderless ship for his entire career, so playing in New York this year will be like coming out of witness protection. Now, is it his fault that as a no. 1 pick he wasn’t good enough to make the Raptors relevant? Definitely. He deserves at least some of the blame. But now he’s got a fresh start, he’ll have more help than he’s ever had, expectations are at rock bottom … Put it all together and Barganani is going to surprise some people this year. He’s a perfect addition to the Village People Knicks. Carmelo and Amar’e and Tyson and J.R. and Fat Ray Felton and Metta and Grumpy Mike Woodson and now BARGS.

You’re telling me you won’t cheer for that guy getting thrown into the mix for 25 minutes a night with the rest of this Knicks team? He’s like a better, more Italian Steve Novak. You know you’ll love him.

Why Some People Don’t Love Him: Well, “people don’t love him” because nobody has any passionate feelings about him one way or the other. I guess Raptors fans might halfheartedly resent him, but even they realize he was overmatched as a no. 1 pick in a weak draft and the expectations were always a little unrealistic. Toronto fans reserve their real hate for Bryan Colangelo. Knicks fans who were upset with the trade this summer reserve their hate for James Dolan. Mostly, Andrea Bargnani is just a decent NBA player whom casual fans never really notice.

Anecdote That Only Makes Us Love Him More: He was nicknamed Flipper by Raptors coach Dwane Casey last year because of how much time he spent rehabbing in the pool. But his REAL nickname is Il Mago, a.k.a. The Magician.

Video or GIF Evidence of His Supremacy: Are you here for the four-minute highlight mix of Il Mago in the Italian League set to the NBA on NBC theme?

Favorite Offseason Instagram: Never thought a career in writing would lead to me looking through some Italian dude’s Instagram archives, but here we are I guess.

Final Word/2013-14 Projection: I’m all in on whatever the Knicks are doing this year, because it’s always more fun to believe in the Knicks and ride the wild momentum swings than to notice all the obvious reasons they are doomed in the end. This year, talking yourself into the Knicks starts with Bargs. Some people won’t love him today, but just remember we had this conversation three months from now when the Knicks are somehow in third place in the East and IL MAGO is the biggest surprise of the first 40 games. The Bargswagon is leaving with or without you. Did you know “Flipper” was also the name of an early-’80s punk rock band? Well, here’s a 10-minute single of theirs called “Sex Bomb.”

It’s a song about Andrea Bargnani in New York this year.