We Went There: USMNT’s World Cup Qualifying Campaign Hits a Snag in Honduras 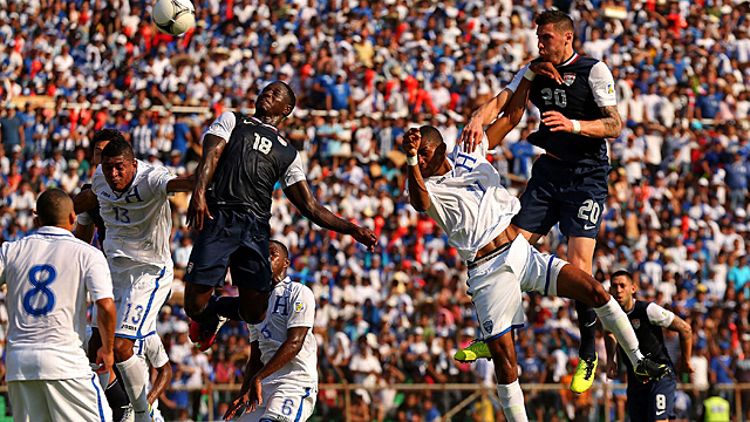 For the past three days, we’ve been told repeatedly that San Pedro Sula, a city of almost 900,000, is the most dangerous place in the world. The United States Soccer Federation informed journalists who were covering the Americans’ first game of the final round of World Cup qualifying of this fact before we arrived. A Monday-night briefing by the State Department reiterated the point, citing a 2011 murder rate that was the highest in the world.

But it was hard to agree with that thesis Wednesday afternoon at Estadio Olimpico. An hour before the home side opened its quest for the 2014 World Cup, the stands were two-thirds full and bouncing with the reverberations of blasting Latin music. The audience consisted of many men, but also plenty of wives and girlfriends (but not WAGs), families, hand-holding, and smiles. Eventually, a reported attendance of 37,000 would fill the venue for the 3 p.m. game. It likely wasn’t quite that many — there were more than 3,000 empty spots among the 40,000 seats — but still, more than .004 percent of the country’s population turned out to cheer on their Catrachos. It felt like a party, not at all like a war zone.

In truth, the cracks in the SPS-as-Beirut-circa–Spy Game narrative started to show earlier in the week. The city is dangerous, especially at night, but there’s a good will here toward visiting tourists. Half a dozen fans from the States offered tales of walking down the streets and getting assaulted by nothing more than good-natured jeers at their red, white, and blue jerseys. They found an excellent local restaurant the previous night. They took cabs, but they were fine. That is admittedly a small sample size, but it’s nothing like the horror stories we were told, or the ones that pop up in the papers.

When the U.S. played here in 2009, a 3-2 win that sent the Americans to the 2010 World Cup, the home fans applauded the effort of the American side. In CONCACAF, where considerate treatment for the away team is not adding vomit to the bags of urine you throw on the field, this is unheard-of behavior. This came to mind four years later, as the music exploded from the PA and the blue- and white-clad fans danced in anticipation.

A strange thing happened when the match kicked off: The stadium got quiet. The fans, without the assistance of pumped-in beats, were nervous. There’s a tradition of footballing failure in Honduras and a general sense this particular squad isn’t that good. They were also hot, as the temperature at kickoff was 84 degrees, with a humidity that made it feel much higher. The weather also affected the 22 men on the field, who played some lethargic soccer to start the tilt. “It’s definitely different from what guys are used to,” starting USMNT center back Geoff Cameron said of the conditions. “It’s one of those things you have to deal with. It’s a factor of the game. You have to pick and choose when to go.” The Stoke City defender was not incorrect, but this is only part of the story. Too often, Jurgen Klinsmann-coached teams come out too slowly. They appear to have no energy. At this point, it’s both a trend and a concern.

Even so, despite Honduras controlling the run of play early on, the Americans scored first. The goal came from nothing. Jermaine Jones, a player loved by Klinsmann (whose opinion counts) and despised by many fans (whose don’t), chipped a pass into the 18-yard box. Clint Dempsey casually watched the sphere drop over his shoulder, picked up his right foot, and volleyed the ball elegantly, effortlessly, brilliantly into the side of the net. Of course he did. Dempsey, Eddie Johnson, and Timmy Chandler ran to the corner to celebrate. Michael Bradley turned around and conferred with Cameron and his center back partner, Omar Gonzalez. The rest of the squad jogged to the sideline for water.

At the restart, what little energy existed in the stadium was gone. This is what happens in Honduran football: The team gets close, then falls. Except while the fans had given up, the 11 on the field didn’t. Four minutes later, an answer came from Juan Carlos Garcia, who found the back of the net on a brilliant bicycle kick.

Two takes on the strike:

“Probably the Goal of the Century for Honduras.” — Jurgen Klinsmann

“Good goal. More often than not it ends up in the stands.” — Tim Howard

Neither is wrong. But there was the USMNT, once again conceding a goal instead of stepping on the throat of a lesser opponent. The fans, ripped from their lethargy, started to believe again.

For the remainder of the half and the first 15 minutes of the second, the ball bounced around the field with neither team creating much in the way of chances. Maurice Edu’s insertion at the hour mark helped the U.S. maintain more possession, but it would be for naught. Honduras poked and prodded, never committing completely to the attack, wary of conceding again.

Just as it appeared both sides would settle for a tie — despite rhetoric to the contrary, it’s likely both coaches would have taken the result if offered before the game — Honduras found a winner in the 79th minute. Boniek Garcia laid it off to an onrushing Jerry Bengtson and the New England Revolution striker outpaced a ball-watching Gonzalez, sending the stadium into rapture. A quarter hour later, the home side had an impressive and important victory.

Post-match, the dejected American team boarded a bus that was destined for the hotel, and then the airport. They were getting out of San Pedro Sula as quickly as possible. They can take a few positives from the match, like the fact there are nine more games in the Hexagonal and they should still qualify for Brazil. Also, Edu made a case for increased playing time. But overall, it was a limp, ugly affair. Those sounds you hear are the growing questions about Klinsmann and whether he’s the right man for the job. He blamed the loss on “too many mistakes in too many areas” and players not rising to the level they are individually capable of, but there was no assumption of responsibility; that he’s the one picking the team, determining the tactics, and, presumably, overseeing the training sessions.

Despite the shortcomings in SPS, the game is — hopefully — a mere blip on the way to Brazil. At a Wednesday morning breakfast, United States Soccer Federation president Sunil Gulati said that he thinks between 19 and 21 points will get the U.S. to the 2014 World Cup. The lower end of that scale represents six wins and a draw, a reasonable total considering how well the Americans have done at home in qualifying. It’s not time to panic yet, but three points against Costa Rica in Denver in March is essential. Four days after that match, the red, white, and blue travel to Azteca where they won in August for the first time ever. If they can beat Costa Rica and somehow tie with Mexico, we’ll forget about Honduras right quick. Even a win and a close loss would be okay. But yes, a draw in SPS would have been nice.

Before it was over, there was one last U.S. chance. In stoppage time, a Honduran midfielder fouled Bradley 25 yards from goal. The crowd grew quiet. They were nervous. Sacha Kljestan’s shot went into the wall but leapt out of bounds for a corner. Howard considered coming up, adding to the attack. He didn’t. Gonzalez got his head on the ball, but it went over the bar. Costa Rican referee Walter Quesada blew his whistle to end the match. The crowd exhaled, then cheered, then started filing out. The sun was going down behind the mountains. It would be dark soon, time to head behind closed doors. Their team sent the U.S. home with a loss. But sometimes it’s nice when the home team wins.