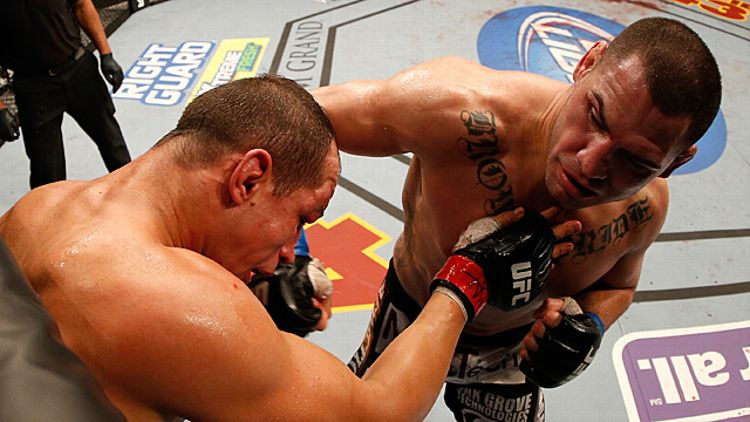 UFC events in Las Vegas have distinct electricity. In a city this grandiose, title fight cards almost become distorted by anticipation and excitement. It just feels different. And with the UFC looking to punctuate 2012 by brandishing a championship rematch between Junior dos Santos and Cain Velasquez, my friend Dylan and I decided to skip our pay-per-view ritual and head directly to the world’s fight capital for UFC 155.

By most measures, 2012 was a promising year for Zuffa: The company held its first-ever event in China, launched The Ultimate Fighter: Brazil, and successfully completed a full year of programming with Fox networks. That said, an uncanny string of injuries (to say nothing of the unprecedented cancellation of UFC 151) marred 2012 to some degree. Even UFC 155 wasn’t immune to orthopedic setbacks, with the loss of top middleweight contender Chris Weidman (shoulder) and fan favorite Forrest Griffin (knee). Most of the matchup holes were sufficiently filled, but Dana White’s final gesture to fans atoned for any 155 adjustments as well as a year’s worth of mishaps — a fight-week vlog jiu-jitsu exhibition between Joe Lauzon and late-blooming white belt Nick the Tooth.

Dylan and I checked into the Hard Rock on Saturday morning, persuaded by their “creepy old guy” rate and proximity to the MGM. You can always stay at the event’s hotel, but there is something about the pilgrimage to the fights (by foot, cab, or limo) that adds verve to the endeavor. The brazen impracticality is titillating and just confusing enough to make sense.

The Hard Rock hosted this year’s Ultimate Fighter finales and will accommodate the Fighters Only MMA Awards next week. Last fall, White severed his relationship with the Palms Casino Resort over a credit-line dispute and took his smaller-venue business with him (over to the Hard Rock, for now). While MMA fans don’t necessarily share NASCAR’s brand loyalty, White’s snub of the Palms has significance and may force the hotel’s minority owners to aggressively push combo meals.

On our way to our rooms, we stopped in the highest-grossing Affliction apparel store in the country, or so we were told (don’t ask if there are more than five). Affliction is an intermittent UFC sponsor and a partner of high-profile fighters such as Georges St-Pierre, Rich Franklin, and Cain Velasquez (formerly with Dethrone). Their latest print advertising campaign is just what you might expect from a rebel lifestyle brand: “Every man dies, not every man truly lives. What is your affliction?” And yeah, my wrinkle-free Dockers probably aren’t cutting it in 2012, but I wasn’t quite ready to purchase my way out of a passive existence. Fortunately, I’d have another crack at retail immortality in less than an hour.

Over at Planet Hollywood, UFC Hall of Famer and Expendables star Randy Couture was signing autographs at the Las Vegas Fight Shop. Although the Xtreme Couture clothing line garnered extra attention from his appearance, the store is also filled with every recognizable brand in fighter attire (including related memorabilia and novelties). We arrived too late for the well-attended meet-and-greet, settling instead for a quick glimpse at the former champion’s cauliflower ears. Couture gave me a friendly arm-tap as he left the store, but as an adult, you really don’t get too excited by those things. And that’s why I texted as many friends as I could afterward to let them know the encounter was no big deal.

After posting my jacket sleeve on eBay, we walked the strip to the MGM Grand — still leaving us a few minutes before the gates opened at 2:45. As Dylan and I compared lines at the sportsbook, a charming woman saw my UFC betting sheet from the Hard Rock and asked how she could wager on Max Holloway (unlike the Hard Rock, MGM was not offering lines for the entire card). As it turns out, it was Holloway’s mother — affable, unnerved, and happy that her 21-year-old son (the youngest on the UFC roster) was chasing his dream. We wished her son luck and looked forward to having a karmic rooting interest in an early fight.

A respectable number of fans showed up for the undercard; the majority were content to arrive later in the evening, missing out on the unforeseen gems that always end up happening. Two of the evening’s $65,000 fight bonuses were Facebook “prelims”; neither involved Mark Zuckerberg. American Kickboxing Academy’s Todd Duffee won Knockout of the Night for his first-round disposal of Phil De Fries, and John Moraga was awarded a Submission of the Night bonus for his guillotine choke against Chris Cariaso.

As for featherweight Max Holloway, his bout with Leonard Garcia was one of the night’s best. Garcia continuously pressed forward while Holloway managed his distance with spinning back kicks and precision counters. Trainer Greg Jackson attempted to control Garcia’s breathing between rounds with what appeared to be Lamaze instruction. The birthing simulation may have worked, as Garcia’s pace became increasingly decisive. The judges, however, saw it differently, rendering a 29-28 split decision in favor of Holloway. The crowd responded with a disdainful roar.

The main card struggled early. In the first of three middleweight contests, Chris Leben’s unanimous-decision loss to Derek Brunson left the crowd cold. Leben, returning from a year-long suspension for a failed drug test, was unusually sluggish and lacked his signature recklessness. Brunson wore down Leben effectively, but seemed grossed out by his tats as he kept checking the clock.

From there, Yushin Okami smothered Alan Belcher in their rematch, netting him a second unanimous victory over Belcher and improving his UFC record to 12-5.

The co-main event between Jim Miller and Joe Lauzon prompted multiple standing ovations and might be considered a classic some day. The two lightweights gave fans a 15-minute refresher course on what makes MMA great: striking, wrestling, jiu-jitsu, and advanced hematology. How special was it? Miller and Lauzon complimented each other on their efforts in the middle of Round 2 during a referee stoppage to fix Lauzon’s glove. That’s strange enough; even more so when frozen in a mount position with blood dripping all over your opponent.

A spectacular finish was not required, but Lauzon’s two submission attempts (heel hook and choke) with just under just 30 seconds remaining almost blew the roof off the MGM Garden Arena. In the end, Miller earned a 29-28 unanimous victory and shared Fight of the Night honors with Lauzon. Lauzon then shared his 40 stitches on Instagram.

At this point, a main event between the UFC’s most dominant heavyweights needed little prodding from Bruce Buffer. The rematch seemed a lock to outshine the showdown in 2011, in which dos Santos knocked out Velasquez in just 64 seconds. Prefight injuries wouldn’t cloud the legitimacy of the outcome this time. The intensity of their entrances said it all; a title fight was about to commence and everyone’s nerves were on high alert. Velasquez quickly executed his stated plan, immediately taking the fight to dos Santos and sending the normally elusive “Cigano” wobbling back to his corner after just one round. The next four rounds followed suit. According to FightMetric, Velasquez scored 11 takedowns and posted a significant strike advantage of almost 2-to-1. Although Velasquez won every round on every scorecard, the battered dos Santos never resigned and showed impressive resilience.

After the fight, Dana White told the media that if he had to bet, he would have risked everything this fight wouldn’t go five rounds. His hypothetical wager is a fitting metaphor for astonishment — heavyweights aren’t made to go the distance, but when they do, it’s something to be relished.

While fighters often experience adrenaline dumps during fights, fans face a different predicament; there’s nowhere to dump it. That’s why we ran over to the Fuel TV stage before leaving to watch wrap-up coverage. Upon seeing retired UFC fighter Kenny Florian on set, Dylan erupted off-camera with a deafening “K-FLO!” as I snapped a photo. The Fuel TV crew appeared amused by Dylan’s enthusiasm but reprimanded me for using a flash while their cameras were rolling. Normally you would expect more of an access barrier to an anchor desk, but most of the security staff was busy poking air ducts to prevent Josh Gross from infiltrating the post-fight press conference.

On the way out of the arena, Las Vegas resident Martin “The Hitman” Kampmann found himself surrounded by fans. It was a nice reception for the Danish welterweight coming off a disappointing defeat, someone who showed up simply to enjoy the fights. Moving about a foot every 15 seconds, Kampmann happily signed autographs and smiled for photos. Someone shouted, “Martin, do you think you’ll ever get out of here?” Kampmann just laughed and rolled back his eyes. It’s all part of the UFC experience, and every fighter plays an important role.

Dylan and I headed back to the Hard Rock and rehashed the fights over burgers and some Lake Mead tap water. We never did agree on whether Nick the Tooth should get a shot at Miller or if Mike Tyson got a bigger crowd reaction than Chuck Liddell. We did agree on one thing, though — there was little sense in hitting a bar or gambling before turning in for the night.

“How can you replicate the excitement of the UFC?” Dylan asked. You can’t.