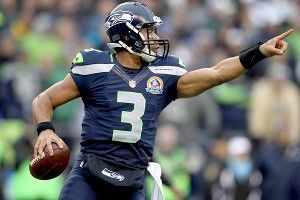 Why does rooting for sports hurt so much? How does one allow himself to get to a point where his favorite player blowing a winnable game for his favorite team is as painful as hearing about the near death of a loved one or a breakup of a long-term relationship?

A normal person would step back and realize that the sadness/frustration that goes with rooting for a game played by mostly thuggish multimillionaires who couldn’t give a crap about you should fall somewhere between getting a parking ticket and not being able to guess someone’s offering on Draw Something. That’s it. No more demoralizing, no less.

So what if Tony Romo came up short again? Why, after 41 years on this planet, why should I care? If I were still 7 years old, fine — but 41? The fact that I can’t outgrow this is grotesque. I feel like I can laugh off “I know you are but what am I?” retorts. I can roll my eyes at a grownup singing about my wife and me sitting in a tree … K-I-S-S-I-N-G. So why is it so enraging if a hundred Twitter followers send me the same stupid tweet: “How do you say Romo in Spanish? Sanchez.” Not funny — don’t laugh.

Don’t worry — I don’t expect you to have an answer to these rhetorical — yet painful questions. My New Year’s resolution is to not care as much about stupid shit. And if I break that resolution — I don’t care as much. See — I’m off to a great start!

Good thing that therapist of mine is still accepting jermajesties* cuz I have plenty of those lying around. 185,000 to be exact. That’s the profit I’ve turned wagering on NFL propositions this season. My road to a million jermajesties (sounds like a bad Max Allan Collins novel) has taken a few slight detours. Let’s get it back on track this wild-card weekend:

Texans will score over 23.5 points vs. The Bengals

I love this prop more than gay people love Kathy Griffin. I might even gear my entire act toward this prop to make sure it never leaves me. Houston is solid at home (scored over 23.5 points in 6 of their 8 home games) and even better when they’re playing a meaningful game against a team that’s not rallying around their sick coach. The Texans have something to prove after surrendering home-field advantage in the AFC, and what better defense to prove it against than the one run by former Cowboys defensive coordinator Mike Zimmer featuring former Cowboys Terence Newman and Pacman Jones. I still can’t for the life of me believe these guys see considerable playing time for a playoff team. Good for them — and better for the Matt Schaub/Andre Johnson connection. 100,000 jermajesties

James Jones 10/1, Randall Cobb 10/1, and Greg Jennings 7/1 to score the first touchdown of the game vs. the Vikings

And if somehow all three of them score the first touchdown at once, you get a million-to-one odds! It’s been almost two months (Week 12) since one of these three weren’t on the receiving end of Aaron Rodgers’s first TD pass. Bet these individually and pray that Jordy Nelson’s pasty white arms and face blending in with the Wisconsin snow leaves the door open for these three. 3,000 jermajesties each

Ed Reed will record an INT for the Ravens +250

Reed’s last pick came against the Steelers on December 2, 2012. 2012! That’s, like, a full year ago! In other words, he’s due. And what better time to snatch one than this Sunday as a tribute to his retiring friend against a rookie QB who’ll most likely be desperately throwing from behind 80 percent of the game? 5,000 jermajesties

It’s hard for me to get the image of Lynch’s 67-yard scamper vs. the Saints two wild-card rounds ago out of my mind. OK … wait … it’s gone. Now I can officially take my place on the Alfred Morris bandwagon. You can stuff me in the trunk with a 350-lb. woman dressed as a hog if need be. This Morris guy is a freak. He averaged 117 ypg after Week 10 and 5.2 yards per carry at home. He’s certainly picked up the slack with his quarterback, RG3 (that’s a nickname I’ve recently given Robert Griffin III; let’s hope it sticks), not playing at full capacity. Look for him to bust out again this Sunday. 75,000 jermajesties

Plug in the name of any unhealthy/decrepit/soon-to-be-leaving this planet celebrity you want. You might’ve heard me on the B.S. Report talking about how teams should purposely hire sick people to coach their teams to garner inspiration. Sort of like the opposite of taking a physical to qualify for life insurance. “Sorry, Miss Gabor, it doesn’t look good for you. Here’s a clipboard — we need you at Browns training camp ASAP.” You laugh — but if the Jaguars had hired Ernest Borgnine last season when I said they should, they wouldn’t have all these problems.

Over/under 1 minute, 18 melancholy seconds devoted to the 2 Minute Drill that Chris Berman, through old clips and dialogue, spends lamenting the fact that Baltimore moved to Indianapolis almost 30 years ago

I’m guessing that by the fourth quarter, Aikman and Buck will be telestrating the two Rookie of the Year candidates’ mothers’ menstrual cycles.

Odds that sometime before Sunday’s game, Andrew Luck announces — in an attempt to further inspire his teammates — that, after the playoffs, he’ll retire from football

Sorry, Ray Lewis. Raystrong vs. Chuckstrong is a tough call but Raystrong is no match for Chuckstrong + Luckstrong. The T-shirts just got a whole lot more complicated.

1/3 odds that the “changes” Jerry Jones talks about the Cowboys making in the offseason merely result in another horrific face-lift undergone by the controversial Cowboys owner.

I feel like this is 1990 and I’m lashing out at my father for taking away my Sega Genesis after an argument about shoveling the driveway. Therapy!

That’s 17 months from birth — not conception. Give me some credit — I’m not that sick!

Over/under 16.5 more games before one of the Lakers’ starting five starts playing with a colostomy bag attached to his shorts

Kobe Bryant had enough this week after losing to the 76ers at Staples Center. “Cause we’re old as shit.” He’s right. When the starting lineup has an average of 15 years on Jack Nicholson’s courtside babe, you know there’s a problem. “You can’t handle the youth!”

3/1 odds that not only does this Norwegian man make the Jets as a kicker, but he’s fully implemented into the team’s nonexistent wildcat offense

Maybe the Jets should consider a Harlem Globetrotters-esque angle. Sure — we’ll lose by 20 to half the teams on our schedule, but in the process you’ll get to see a foreigner kick a ball to the mezzanine and knock Fireman Ed’s helmet off his head. We got ourselves a gimmick, Woody Johnson — go ahead and raise the price of the PSLs.

Betting all home teams in this round is more dangerous than making your living as a paparazzo chasing Justin Bieber on a Segway. However, this week should be an exception. All four road QB’s are rookies or sophomores. Worse yet, they’re playing in Houston, Green Bay, Baltimore, and Washington — probably four of the seven or eight most hostile venues in today’s NFL. (Channeling my inner Cris Collinsworth) These go 3-1 at worst. Go crazy paying off those holiday credit card bills. Fiscal cliff, fiscal schmiff, I say.