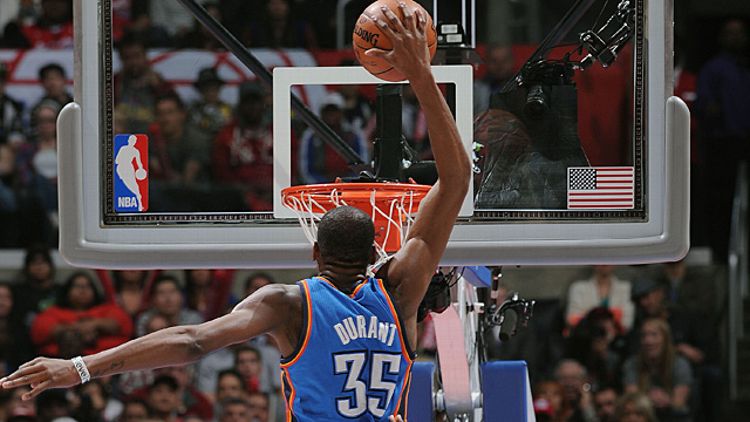 Kevin Durant is now method branding. You may be familiar with this new “KD IS NOT NICE,” or (“#KDISNOTNICE” for my Twitterati) Nike campaign. I can’t claim to call this one for the chicken or the egg (was he always not nice or is he being not nice because Phil Knight says so), but this was an entirely different Kevin Durant than the one who came through town last season. Right now, Kevin Durant is playing basketball with a loop of Meek Mill’s “Dreamchasers 2 Intro” playing in his head. His razor-sharp game now has a serrated edge to it. His long-range shooting comes with opposing bench stare-downs. If he’s initiating sets (which he did plenty of last night, acting as a point-forward) and gets some contact, you can bet a referee is going to get a silent but deadly look. Maybe not even that silent. And when he does this to people …


Even on the road, he yawps loud enough to let everyone in the building know this is his mother-you-know-what’ing house. This idea that Kevin Durant is going to stop a basketball game to make sure a stray ladybug makes it across the court without getting stepped on? That’s over. It’s hard to imagine that, in a game featuring Matt Barnes, Ryan Hollins, Blake Griffin, and Kendrick Perkins, that Kevin Durant would be the biggest loud-mouthing, irritating bad-ass in the building, but it’s true.

The Clippers like to throw their weight around at home (as they should). The bench players over-celebrate Willie Green jumpers, Griffin stares down opponents after grabbing pedestrian rebounds, and Chris Paul (who missed the game due to his bruised kneecap) always seems to be jawing with someone (he got into it on Saturday night with John Wall). But on Tuesday night, Kevin Durant ran Bartertown.

During the fourth quarter (in which he scored 13 points, shooting 5-6 from the field, and 3-3 from 3-point range) Durant absolutely feasted from the top of the key. After a particularly net-shredding 3, Durant barged down the court, shouting something insensitive about the Clippers or perhaps self-aggrandizing, and he bumped/charged into Blake Griffin. Now, the Clippers forward usually enjoys himself a nice staring contest whenever the opportunity arises. Last night? Last night he just kept on walking.

The Non-Haters' Guide to the NHL