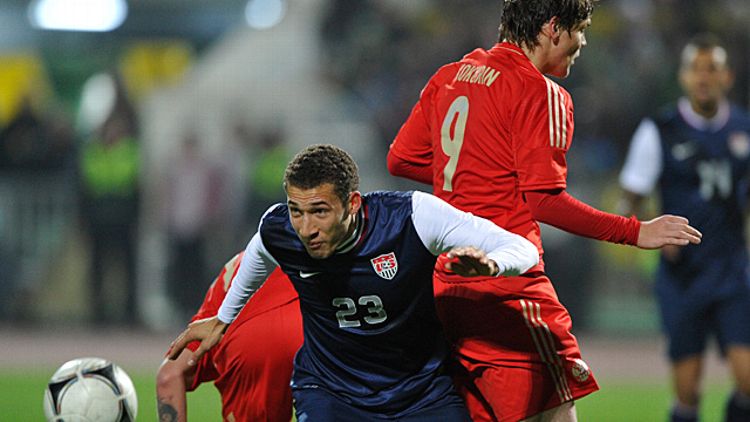 I was shivering in the open, unheated press box in Krasnodar’s Kuban Stadium, watching the United States men’s national team as they were losing 1-0 to host Russia, when a friend — who has seen a lot of these matches — sent me an e-mail:

“This seems like a traditional game where we get a garbage equalizer?”

Maybe?, I thought, fingers too cold to type back. We were halfway through the second half and scoreless since Fedor Smolov put Russia ahead in the ninth minute. The Americans, initially disjointed in front of 28,000 intensely loud fans, were better after the first 20 minutes or so, but they weren’t exactly creating chances. If anything, Tim Howard and poor Russian finishing were the only reasons the scoreline wasn’t more lopsided.

I sat watching, waiting, expecting a U.S. loss to close out 2012. Except six minutes after the initial e-mail, another came:

You see, Michael Bradley scored. His equalizer in the 76th minute was not Zlatan — in every player ever’s defense, nothing is — but it wasn’t exactly garbage, either; it was classic America. Maurice Edu sent a not-quite-but-pretty-much prayer into the box where Juan Agudelo, playing for the national team for the first time since last October, managed to get his head on the effort by jumping, twisting, and contorting in a way that only a hyper-athletic 19-year-old can. The ball fell toward an on-rushing Michael Bradley, who skillfully one-timed it out of the air — of course he did — off the post and into the back of the net. What a goal, indeed. Welcome to the schizophrenia of being an American supporter (or journalist).

Tie game, 14 minutes to go. A draw would have been a solid result, one that would see the U.S. finish with a .750 winning percentage on the calendar year. Road wins over Italy and Mexico and a tie in Russia. Not too bad.

But nothing is ever simple. In the 84th, Italian referee Nicola Rizzoli whistled Clarence Goodson — who replaced injured captain Carlos Bocanegra early on — for a kinda-sorta foul on Artem Dzyuba in the box. The call, perhaps, was justice for a non-call on Tim Howard’s definitely-maybe take-down of a Russian attacker earlier in the half. At any rate, Roman Shirokov converted the penalty, putting Russia up 2-1. (Let’s pause here to note that Jermaine Jones managed to sky a lovely cross from Jozy Altidore well over the bar moments prior to the Goodson foul.)

But rather than roll over, the Americans kept pushing. Terrence Boyd and Mix Diskerud, 21 and 22, respectively, joined the proceedings for Altidore and Geoff Cameron. Fabio Capello’s Russia grew visibly tired. With seconds remaining, Bradley lofted a Route One ball into the box that ended up on Diskerud’s foot. The midfielder, earning his third cap and first since February, struck it and scored it.

“I was eager to come in and contribute. The players played for a long time and I came in and did my best,” Diskerud said after the match. “I was hoping with all my heart that the ball was going to come back to me. [It was] one of those strikes where the ball goes in and it feels good.”

The next stop: 2013, a year in which Klinsmann and his troops continue the work they started when he took over last August. “I think our team grew a lot over the last 12 to 16 months. I think we’ve developed a lot more personality and confidence to compete with the best teams out there. We still have a long way to go down this path, but I think the younger players are a very important part of this path,” said the manager after a match in which he started five players born in 1989 or later.

“I see a team that is really growing together. There is a lot happening now in the United States with football. We have great leaders: Tim Howard, Jermaine Jones, Michael Bradley. They are role models for the younger players.”

You can say one thing about this work in progress that’s progressing slowly in the right direction: The players, old and young, share a flair for the dramatic. Whether that’s a good trait or not is a question for the next 12 months.

Filed Under: Noah Davis, Soccer, USMNT, We Went there