We Went There: The NCAA Tournament West Regional 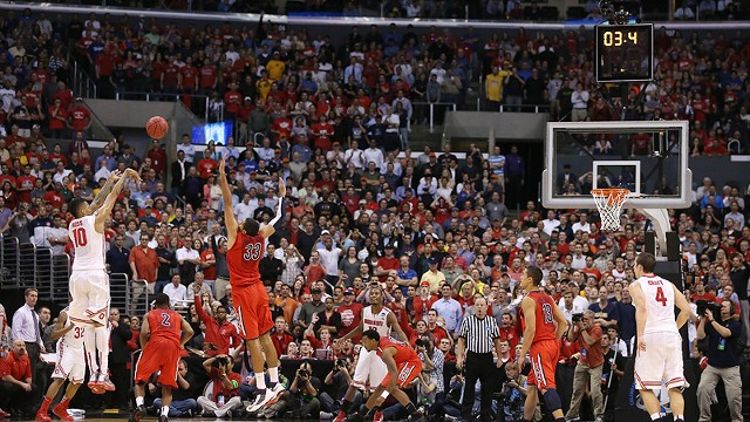 As Aaron Craft dribbled down court last night, with the game tied and 20 seconds remaining, the Staples Center looked it might on any other night. A 4:45 p.m. local start time had meant a slow-arriving, slower-to-settle-in crowd, but by now, the place was mostly full, and everyone was on their feet. Craft took the ball from the top of the key, drew an extra defender, and found sophomore LaQuinton Ross for an open 24-footer on the left wing. With no hesitation, Ross pulled up. The shot went down with just two seconds left, giving Ohio State a 73-70 win and a trip to the Elite Eight, and the Buckeyes crowd, much of it contained directly behind the team’s bench, exploded.

Inside the Ohio State locker room — normally reserved for the Lakers — the scene was like it might be after a big win in March. The nameplates were missing, but the cameras were there. The horde gathered around Craft, his baby face still beet red, but rather than slide on their designer shoes and quickly make for the door, the game’s lesser names all sat hunched over in their chairs and dug into plates full of meatballs, pasta, and chicken. There are only so many free meals.

One locker — all the way to the left, on the wall farthest from the door — was unmanned. On the floor was a pair of massive Nike slip-ons, and inside hung shorts and a gray no. 10 jersey. Among the best players in the country coming into school, LaQuinton Ross missed much of the start of last season because of academic ineligibility. “He didn’t join us until mid-December,” Ohio State coach Thad Matta said. “He missed grade school, junior high, high school, because those first two months of the season are the most important months, in terms of fundamentals.”

“So when he got here, he was a little behind. I told him at one point, ‘I can’t hold tryouts during the Big Ten.’”

A reserve who averaged just eight points a game during the season, Ross has 34 in his past two games, including 14 in yesterday’s second half. “Coming in my freshman year, I think I was kind of immature as far as my thinking, thinking, ‘Why am I not playing? Why am I not doing this?’ I think … all the hard work is paying off in this tournament.”

The game winner came on a court home to a player who’s had plenty of his own, and just down the hallway from that unmanned locker, Ross sat on a podium like Kobe Bryant has so many times.

LaQuinton, do you know whose locker you changed in?

“I found out from one of the guys that works here that it was Kobe Bryant’s locker,” Ross said. “Before we got here, I called dibs on it anyway. But I didn’t know whose it was until he came in and told me.”

By the final few minutes of Wichita State’s 72-58 win over LaSalle, any resemblance to a standard night at Staples was gone. The upper deck was almost completely empty, and much of the lower bowl had left, as well. What remained resembled a high school crowd — two face-painted sections of maybe a few thousand total, positioned on opposite sides of the court.

The Shockers had leapt out to a 14-2 lead and never really looked back. Bespectacled 6-foot-8 senior Carl Hall was too much for LaSalle inside, and each time the Explorers would cut into the lead, it seemed like senior guard Malcolm Armstead was there to stanch the bleeding for Wichita State.

When Hall got his curtain call with just over a minute left, just about everyone not wearing WSU or La Salle yellow had exited, and it felt like the Shockers had rented out Staples for their own private party. The band launched into its new staple, a co-opted version of the New Orleans–based Rebirth Brass Band’s “You Don’t Want to Go to War.” As the band and crowd sang — You don’t want to go to warrrrr with the Shockers — the words echoed around the mostly empty arena.

The buzzer sounded, and a celebration fit for a school 32 years from its last Elite Eight began. The band started a chant of “We’re staying in L.A.,” much to the crowd’s delight, and when Hall and Armstead left the court, arms hanging off each other’s shoulders, the din grew even louder. Everyone stood waiting for head coach Gregg Marshall, who made his way to the stands and kissed his wife and kids. “When you’re involved in it, just like a season, it’s hard to reflect back because you’re right in the middle of it,” Marshall said after the game.

“I don’t know if we had a signal that we were going to make this run. We talked all year about having the ability, if we played well, to play with anyone. When we don’t play well, we struggle. We didn’t talk about Final Four — I probably mentioned it a couple times, that this team can go as far as they want to go when they’re playing well.”

They’ve gone almost as far as a team can go in college basketball, and on Saturday, they’ll play a national powerhouse for a chance to go to Atlanta. When players come to Ohio State, they expect to play in the Final Four, and this year’s group of Buckeyes is fresh off one. But if Marshall never mentioned it before, it’s on his mind now. As he came off the court, he raised three fingers in the air. “Three more.”

With their head coach gone to the bowels of the arena, the Wichita State crowd was shooed to the exits. No one seemed in a hurry to leave. It was a middle-aged, mustachioed man with a leather cell-phone holder on his belt that asked the question the rest probably had.

“Where’s the party at?” he asked. “Because that’s where I want to be.”