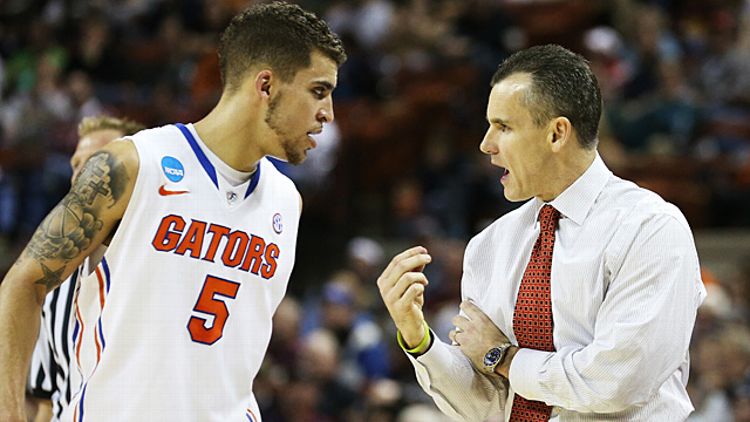 The Sweet 16 continues tonight with another slate of intriguing games that promise to be unpredictable. Luckily for all you gamblers out there, I’m here to guarantee that the following five things will happen:

Just imagine what the past four days have been like for Florida Gulf Coast’s players and coaches. Since FGCU became the first 15-seed to advance to the Sweet 16, every media outlet in the country wants a piece of these guys. The players have become rock stars on campus, and at least one fan has gotten an FGCU tattoo that I’m sure they’ll never regret. The Eagles’ egos have probably (and understandably) swollen to unprecedented heights. I wouldn’t be surprised if instead of practicing this week, they just watched highlights of their first two tournament games and congratulated each other for being awesome. This isn’t meant to be criticism. If I were in their shoes, I wouldn’t even show up to play Florida because I’d be too busy partying on the beach and trying to convince girls to come home with me by telling them, “You probably saw me on TV beating Georgetown.”

Anyway, because of the distractions, because the Gators are surely pissed about ceding the state spotlight to a school in its third season of Division I basketball, and because Billy Donovan has been in a similar position before, I’d be surprised if Florida wins by less than 20.

This is one of my favorite NCAA tournament broadcaster tropes. It’s like they’re explaining to all the people who didn’t start watching college basketball until the tournament that just because these teams are double-digit seeds, it doesn’t mean they’re bad. They’ll probably even suggest that these teams’ presence in the Sweet 16 proves that the selection committee seeded them too low, as if the committee should’ve ignored Florida Gulf Coast’s two losses to Lipscomb or Oregon’s 24-point loss to Stanford. This isn’t to say that FGCU and Oregon aren’t good. It’s just that it’s a little disingenuous to pretend that the rest of the season doesn’t matter because they’re playing well right now. Whatever the case, because I expect Florida Gulf Coast to get stomped, my guess is that Oregon will be the recipient of this boneheaded compliment, most likely during a stretch in the game when the Ducks are hanging tough with Louisville.

Considering that Hardaway’s beanie has its own Twitter account, and I can’t remember a single time this season that he hasn’t worn a beanie while watching his son play for Michigan, this is a pretty stupid prediction. In fact, I want to change it — what I meant to say is that Hardaway won’t wear his typical blue beanie with the yellow “M” on it. I’m thinking that now that the Wolverines are in the Sweet 16, Hardaway is going to get superstitious and have his beanie match Michigan’s jerseys. Speaking of which, here’s a prediction within a prediction: Michigan won’t wear blue jerseys against Kansas, but will instead opt for the all-maize look. Hardaway will follow suit and bust out a new yellow beanie with a blue “M” on it. Just you watch.

4. One game will come down to the final possession

The obvious choices would be Duke-Michigan State or Kansas-Michigan, but I wouldn’t be shocked if Oregon-Louisville ends up coming down to the last shot instead. I know that Louisville is the national championship favorite and the Ducks are 10-point underdogs, but it’s easy to forget that Oregon isn’t a 12-seed. The Ducks have been playing extremely well lately, and the fact that they’re in the Sweet 16 after beating Oklahoma State and St. Louis should tell you that the selection committee got it completely wrong. Whatever the case, for Louisville fans’ sake I hope the game that comes down to the wire involves a Michigan school, because the Cards aren’t exactly the consummate example of late-game success.

5. Bill Self will become so enraged with Elijah Johnson that his toupee will fall off

Self and Johnson have an interesting relationship, and by “interesting,” I mean that before every game, I’m pretty sure Self pulls Johnson aside and gives him the following speech:

“I’ve worked my ass off to get to where I am today. I spent seven years coaching at small schools in Tulsa just to get the chance to coach at a big-time program. Now I’m here. I have multiple luxury automobiles, I own real estate all over the greater Lawrence area, and women throughout the Midwest want to lay with me. Look me in the eye, Elijah. I have it all, I tell you. IT. ALL. And I’m not about to let some shithead like you ruin it for me. God as my witness, if the other team’s point guard outplays you tonight, I will end you. Your corpse will spend eternity in the crawl space of my summer home, and when guests ask, ‘What’s that smell?” I’ll tell them it’s the scent of mediocrity. It’s the smell of a guy who wasn’t half the man that Tyshawn, Sherron, or Mario were. Look at me, Elijah. I’ll tell them it’s the smell of a man who fell short of success one too many times.

“Alright, good talk. Remember: Just go out there and play your hardest, and everything will take care of itself. Go get ’em, buckaroo.”

We Went There: The NCAA Tournament West Regional