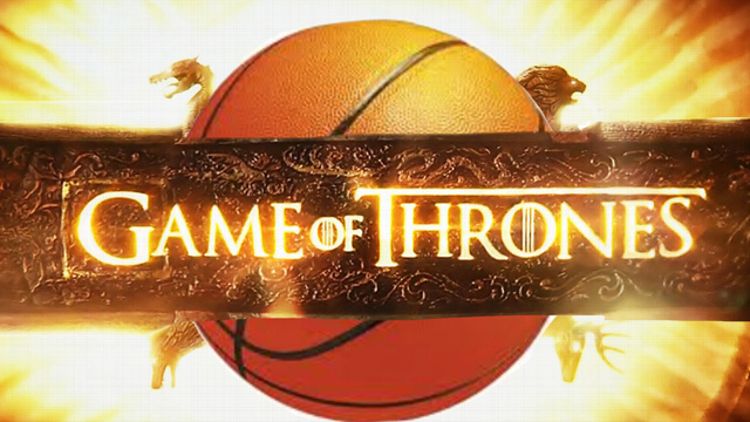 If you missed yesterday’s romp through the Western Conference, then consider this link your message via raven. 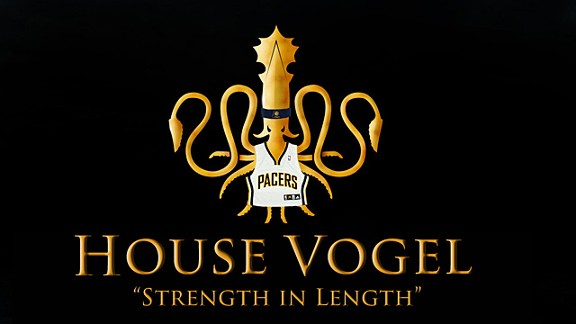 Steve McPherson: Aha! This is where the Greyjoys come back. Sure, the Iron Islands’ main industries are fishing and pillage, not manufacturing, but the remote, barren life of Balon and his clan can’t be so different from the Midwest, right? The Pacers work a physical, defensive style of ball: According to NBA.com, they play at the sixth-slowest pace, allow the second-fewest points and fewest made 3-pointers, and hold their opponents to the lowest field goal percentage in the league — both from the arc and overall. The Greyjoys take what they want and give nothing in return. Their sigil is a golden kraken that has 10 giant arms. So do the Pacers’ starters: Their average height is just more than 6-foot-6, while their average wingspan is more than 7 feet.

The Pacers’ splashiest recent free agent signing was … David West? Not very splashy. Their talent, from Danny Granger to Paul George, comes from the draft. Even getting George Hill was more a matter of bringing home a wayward son, given how he grew up in Indianapolis and went to IUPUI. From how they play to how they build their team, the Indiana Pacers, like House Greyjoy, pay the iron price. 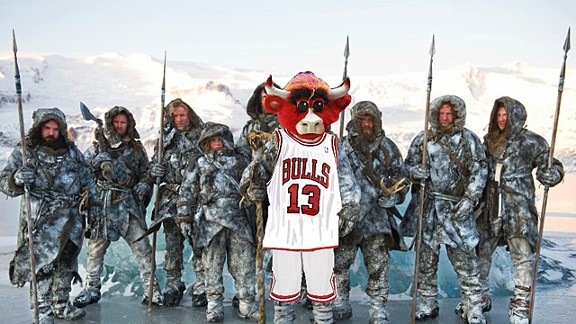 netw3rk: Stretching from the Wall ever northward into the heart of winter is the vast undeveloped land of the Wildlings. The Wildlings bide their time and gather their strength while their leader, Mance Rayder, molds them into a force capable of challenging the kingdoms south of the Wall. The Bulls play in the NBA’s third-largest market — leading to speculation they aren’t leveraging their market in correct correlation to their ambitions — and are currently laying low until their talisman Derrick Rose can return to lead them against their southern adversaries. Rattleshirt wears a human skull to appear more fearsome while Carlos Boozer once painted his head black. 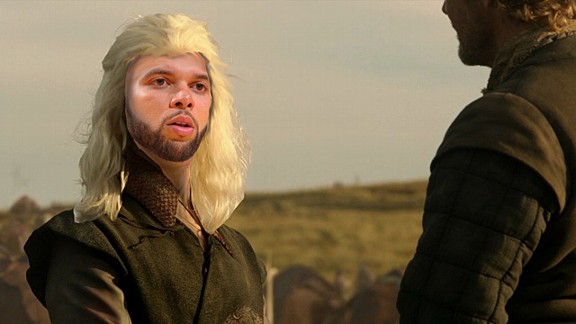 McPherson: Earlier we compared the story of Viserys Targaryen to the Rockets’ efforts to land Chris Bosh in 2010, but as far as the playoffs in 2013 go, I think you have to look to the Brooklyn Nets. After wandering in exile in the wastes of the Pine Barrens, the Nets hitched their fate to Jay-Z and Mikhail Prokhorov, who promised the unending riches of Brooklyn; Viserys spent years trying to raise an army before finally allying himself with Khal Drogo and his 40,000 warriors in the hopes of taking the riches of the Seven Kingdoms.

But Viserys quickly discovered a marriage of convenience can buy neither loyalty nor respect. And the Nets — who have the second-highest payroll this season — are discovering the $63 million they’ve spent on Deron Williams, Brook Lopez, Joe Johnson, and Kris Humphries has only managed to buy them a 4-5 matchup against Atlanta. They might make it out of the first round, but when all those riches get combined with the Heat, I’d wager the Nets are going to be the ones wearing a molten crown of gold. 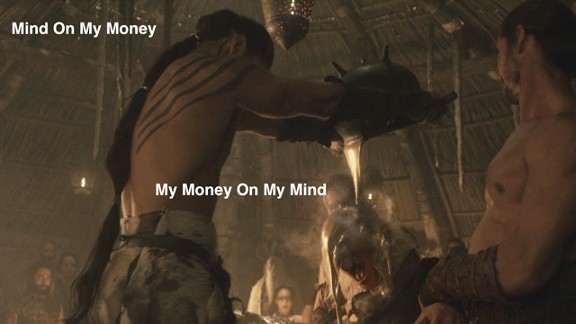 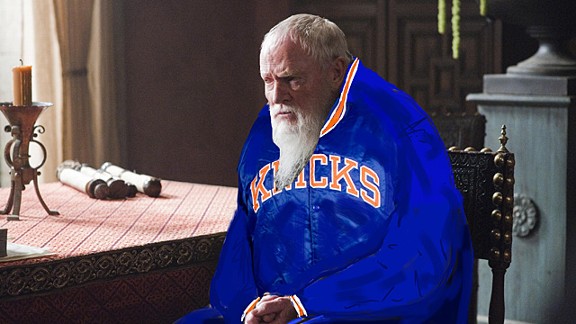 netw3rk: The Knicks seem pretty obvious to me: Maester P, a.k.a. Py$op Rocky, a.k.a. Many Chainz, a.k.a. Grand Maester Pycelle. Maester P — long of tooth and beard, his mobility hampered by age and ponderous chains — is not considered a contender to the throne. Despite this (and despite how much you’d like to), you can’t ignore him because of Maester P’s ability to do damage from long range via raven. Neither the Knicks nor Maester P can be said to be powerful in the general sense of the word. However, both wield outsized influence because of their proximity to power. In the vulgate of the real estate business it’s about location, location, location: Pycelle’s spot in King’s Landing on the small council, and the Knicks’ location in New York City. The Knicks are the oldest team in NBA history. Pycelle is guaranteed to be the oldest guy in the room. The Knicks are owned by a vindictive billionaire who forces people to listen to his music. Pycelle is beholden to King Joffrey, whose penchant for torture seems benign in comparison to JD & the Straight Shot.

Atlanta Hawks
McPherson: The two most important things for driving a narrative forward are conflict and change. This, in a nutshell, is what makes a project like this one work: We can bash and distort the identities and trajectories of NBA teams into a shape that fits a similar arc for a house or a character in Game of Thrones because in either case, there are obstacles to overcome, a road to walk that will change them. Sansa began as a spoiled, naive girl and we’re watching her suffer and grow. Bran’s fall closed off one path for him while opening another one whose consequences are still unfolding.

But the Hawks: The Hawks never change. The last time they got further than the conference semifinals was so long ago (1970) that they got swept by the Lakers in the division finals because they weren’t even called conferences yet. And they were in the West. After eight years out of the playoffs to begin the 2000s, Atlanta has gotten comfortable losing in the second round, occasionally switching it up by losing in the first.

If the Hawks have any equivalent in the world of Game of Thrones, it’s the mass of people who either show up to see a decapitation or the jousting for Joffrey’s name day. Maybe they’re just stopped at the inn for a horn of mead and happened to see Lady Stark and Tyrion go toe-to-toe. They watch other people’s plotlines develop and evolve, then go home, plant some crops, pour a cup of Dornish wine, and check what’s on the DVR. 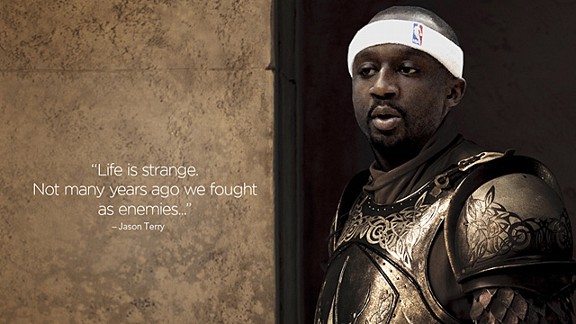 McPherson: The Boston Celtics are old and have been for some time. Nonetheless, they’ve stayed dangerous and earned a reputation as a tough playoff matchup on the strength of pushing the Heat to seven games in the Eastern Conference finals last season. But this season they lost Rajon Rondo, then Jared Sullinger, then Leandro Barbosa. And that’s the thing: It’s not just age, but time.

Ser Barristan Selmy knows all about that. Still a capable knight after 40 years, he served the Kingsguard with honor right up until the moment he was summarily dismissed by Cersei Lannister, who told him, “It is time to put aside your armor and your sword. It is time to rest and look back with pride on your many years of service.” But Selmy doesn’t want to rest — he still wants to serve, to fight. For him, age is an excuse, but time is inescapable. His time passes and all he can do is storm out of the castle.

The Celtics might be a tough out in the postseason, but it seems inevitable that they’ll be storming out of the castle before too long, bound for parts unknown.

Who Have We Forgotten?

netw3rk: Jaqen H’ghar, a personal favorite. The mysterious assassin whose life Arya saves and who repays that karmic debt by facilitating Arya’s escape from the clutches of the Lannisters. Arya has Jaqen commit several murders of Lannister men, all while Jaqen is wearing Lannister colors. Then, after delivering Arya and her companions to freedom, he gives her some cryptic advice, a coin, then magically changes his visage so as to be unrecognizable and disappears. Let’s see … subterfuge; mentoring Arya, who we’ve already decided is Russell Westbrook; suddenly changing his appearance and switching sides … gotta be Derek Fisher, right?

McPherson: Your logic behind connecting H’ghar to Fisher is nearly flawless — except for the fact that H’ghar is ruthlessly dedicated to the task of killing whomever the Red God has demanded, whereas Fisher’s only skill is his barely tangible “veteran leadership,” which he seems to have acquired only by not dying. Are we sure he’s not Walder Frey?

For Jaqen, I like Ray Allen. Consider H’ghar’s awesomely badass farewell scene with Arya at the end of the second season, when he tells Arya, “To be a dancing master is a special thing, but to be a faceless man? That is something else entirely.” H’ghar is not loyal to the Lannisters, nor the Starks. He is loyal only to his task.

Allen is loyal to the jump shot above all else. Do you remember that he was actually on the cover of a video game? It didn’t suit him particularly well. Like a man without a house, he will align himself with whatever force will allow him to continue his endless task of shooting. If it helps his team to a championship, a man will do it. But what looks so primary to us seems almost secondary to him.

Who Wins This Game of Thrones? 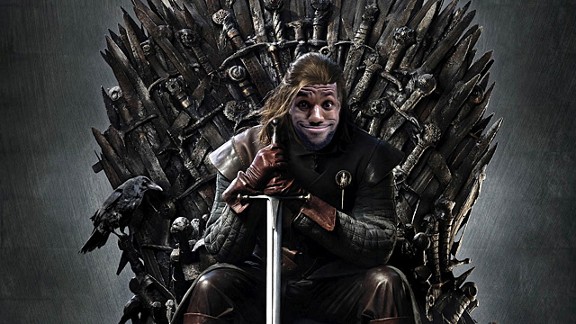 netw3rk: The Lannisters/Heat retain the Iron Throne but face strong opposition from The Starks/Thunder. But, as opposed to the show, I’m pretty certain the Thunder’s winter is actually coming.

McPherson: Using Game of Thrones to make predictions about the eventual NBA champion might tell us more about Game of Thrones than the NBA. The show doesn’t traffic as much in gray areas, as I think other comparably ambitious shows like The Wire or The Walking Dead do. We’re supposed to see Joffrey as a wildly out-of-control asshole child. There’s very little about Ned Stark that isn’t just and noble, even if some of his decisions are misunderstood by those around him, including his wife. We root for Arya Stark, unreservedly. We wish for Theon to get his comeuppance, unhesitantly.

The show plays with how we understand stories, though; it refuses to let us feel comfortable that good will triumph in the end. If old-fashioned dramas of the twirly-mustache and chiseled-hero variety gave us good guys to root for and bad guys to boo, the more recent trend in antiheroes demonstrates that things are not always plainly black and white. But Game of Thrones throws that instinct to root and boo in our faces. It shows us our impulse to find champions or villains may be wrong, but it’s almost impossible to let go of. That we see things in these ways is nearly inevitable, given how we work.

It’s why fans called LeBron a traitor for going to Miami, why teams like the Lakers have just as many haters as fans, why there’s a PR push to show that Kevin Durant is not nice, why Kevin Garnett’s championship with Boston was such a compelling tale of redemption. But everyone sees the characters in the drama, sees the map, differently. It even shifts around inside one person: I can’t tell you the number of times I’ve been pulling for a team in one playoff series only to turn around and root against them when they came up against a bigger underdog in the next round.

That’s my curse: I like underdogs. So I like the Starks, and if it comes down to Thunder/Heat in the Finals, I’m going to like the Thunder because the Heat are the defending champs. But my sense of the matchup has as little to do with the outcome as it does in the story of the Starks and the Lannisters — that’s one of the things I value in both Game of Thrones and the NBA Playoffs: No one is invulnerable.

In other words, valar morgulis. “All men must die.”

We Went There: The NCAA Tournament East Regional