We Went There: The NCAA Tournament East Regional 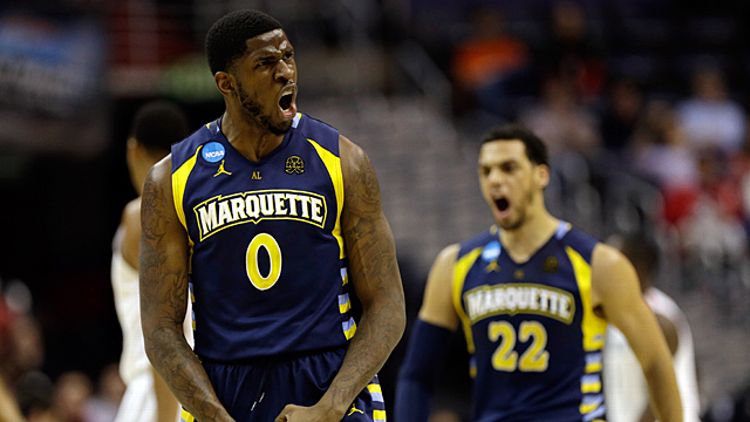 I don’t give away my basketball heart easily. I thought they were dead against Davidson, and I thought Butler had more of everything. The old loyalties never die, but whatever it was that the selection committee, and their coaches, and they themselves saw in this season, had eluded me. But Thursday night, as the Verizon Center clock wound through the last three minutes, and I heard the old chants and the song and everything, and after I watched Marquette pick a conspicuously unenthusiastic Miami team apart in its 71-61 win in Washington, D.C., I finally handed it over. (Simmons warned me there’d be days like this.) Sometimes, the whole really is the sum of the hearts.

OK, I admit it. For the last three minutes of Thursday’s game, I stood with the band, waiting for the clock to run out. OK, I admit it. There’s absolutely no way I thought I would be there, standing next to the band, as the clock ran out, waiting for the fight song, and wondering how in the name of Dean (The Dream) Meminger this particular Marquette team had gone sailing into Saturday’s NCAA tournament East regional finals against Syracuse when, in fact, I’d watched the Golden Eagles all season and, outside of a ferocious willingness to play the full 94 feet for the full 40 minutes, everything else about them had seemed not ordinary so much as rudimentary.

Watching the two big guys — Chris Otule and Davante Gardner — in the post in a half-court set is like watching a beginner’s class at a dance studio. All that’s missing are the footsteps painted on the floor. Gardner has miraculous hands, an out-of-body talent at the free throw line, and all the lift of a refrigerator. If he has a basketball ancestor, it’s probably Oliver Miller, the huge center who played at Arkansas in the late 1980s, except that, thank Whoever, Gardner appears to be considerably more sane than was Miller, who ate himself out of a few million dollars in the NBA and who, last year, ended up in jail in Maryland for pistol-whipping a guy. But other than that — and late-season offensive improvements by both Vander Blue and Jamil Wilson — they worked hard. They were more than admirable. But, occasionally, on offense, they looked like 12 miles of bad road. In the first half Thursday night, while the Golden Eagles were in the middle of piling up the lead they never would surrender, there came a play that summarized Marquette’s season, good and bad, and was more central to the outcome than I realized at the time.

Some Marquette player missed a shot. Trent Lockett, a forward who made about 10 great plays that don’t appear in your morning box score, ran down the miss and, sprawling flat out, tossed it to point guard Junior Cadougan. Thus gifted with a glorious second opportunity, Cadougan proceeded to take the ball right into three Miami defenders, running over a dude, and picking up a charging call. He’s lucky Lockett didn’t brain him.

However, two minutes or so later, they were up 12, and the whole thing seemed utterly inexplicable. I saw a few shots go down, but what I had missed was a collaborative effort, especially on defense, to create the game you wanted to play while the game itself was going on. It isn’t as simple as “making the other team play your game.” That’s the easy part. It’s more like creating the overall athletic and emotional context within which you are most comfortable. The second-seeded Hurricanes not only looked beaten; they looked baffled. What became readily apparent, though, was that there was only one team on the floor that actually wanted to be there.

“This,” Lockett said after the game, “has been more than I could’ve asked for.”

Lockett’s is the kind of story that can redeem the whole business, if only for a night. Raised in a suburb of Minneapolis, he finished his undergraduate degree at Arizona State in three years, which is accomplishment enough, God knows, but which also left him with one year of eligibility left. His mother had fallen seriously ill, so Lockett moved on to Marquette to play one season in order to be closer to her. On a team that has grown extraordinarily tight, Lockett is the glue. He was in the middle of every one of what the jargon of the day calls the “50-50 plays” Thursday night, and he won most of them. His eight points and 11 rebounds were merely the quantifiable measures of his play. The rest of it could be fairly described in the category of Embodiment of This Very Strange Thing That Is Going On.

Certainly, coach Buzz Williams isn’t going to try to explain it. He hit the interview room all grumbly after the game, calling out by name some poor sod who had ranked 3-seed Marquette as the 16th team among the Sweet 16, and playing the You Guys card over and over again. “We’ll be dead last when we wake up Saturday morning,” he said. “We will be eighth out of the eight left.”

“I’m really not good postgame. Actually, I’m really not good at all [on the] day of the game to you, my wife, my kids, because I do want to win, and I don’t want to win for the outcome; I want to make sure that I and our team learn the lessons from what the day is going to give us.” The day was pretty generous, Coach. A little lightening up might have been in order.

And now, Lord save us, they get Syracuse, whom they’ve already beaten once this year, and, watching the game, I didn’t know how they did that, either, except that the Orange kept fouling Gardner, who kept hitting free throws, 12 of 13 on the night. If you’d ask me to explain how this team got to where it is when it walked out of Verizon Center on Thursday night, I would mumble something about “aggressiveness,” and run for the door before you realized I didn’t know what I was talking about. To me, it’s completely inexplicable, as, I’ve found, are most things of the heart.