We Went There: The Lakers Steal the 7-Seed 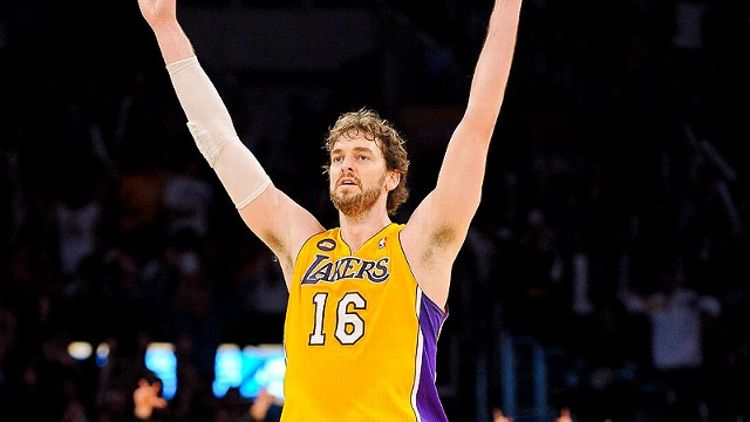 Less than 10 minutes before tipoff, the real weight of last night’s game at Staples Center, the type of weight given to fighting for playoff life and extending a season that seemed over a dozen times, was gone. As the Lakers and Rockets warmed up on the court, the video board showed the final seconds of the Grizzlies’ win over Utah, and with them came a cheer from those who’d already made it to their seats. After all this, the Lakers were going to the playoffs.

Whatever relief there was (and as Mike D’Antoni noted afterward, there was plenty) was short-lived. The playoffs were one thing, but this was also a Lakers team that had a lot to gain from stealing the 7-seed away from Houston. It’d be their fifth consecutive win, and their second against a playoff team without Kobe Bryant. It would also mean a weekend flight to San Antonio instead of Oklahoma City — likely the difference between a remote chance at winning a series and a remote chance at winning a game.

Much of the first quarter featured the Lakers’ same old issues. By running their offense through Pau Gasol and Dwight Howard, there were plenty of open shots for the likes of Steve Blake and Jodie Meeks. When those shots weren’t going in, long rebounds led to quick run-outs, and the Lakers showed off the type of horrid transition defense they’ve made into a trademark all season. Chandler Parsons finished two layups in three possessions at one point in the first quarter, and by halftime, the Rockets were on pace for 100, and the Lakers trailed by six after shooting 33 percent from the field.

If the Lakers had something to hang their hat on from the first 24 minutes, it was that the defensive energy in the half court that has built during the past few games was there again. If it wasn’t a James Harden isolation or a basket on the run, Houston wasn’t getting the shots it wanted, and late in the second half, that would make all the difference. A Harden 3 made the lead 11 with four minutes left in the third, but that’s as high as it would ever get. In 21 more minutes of game time, the Rockets would score just 29 more points, and as much as it had to do with Harden going cold, it also had to do with Howard looking like the player his teammates imagined he would be.

D’Antoni said at least four times following the game that the biggest difference in his team between today and three months ago is that today, they’re healthy. For some players that means actually being on the floor, but for others, it means expanding what they’re capable of. Howard was unquestionably a shell of himself early in the season, but last night, every time a Rocket came into the lane, it seemed as if Howard was there to meet him. More than once down the stretch, Howard jumped straight up and absorbed contact from Harden before getting a hand on a shot and getting things started the other way. “That’s the Dwight I want to send my guy into,” Blake said.

Blake had his share of the hero’s role last night with several timely shots, but overall, it was still a 6-for-20 outing that shouldn’t leave concerns about “chemistry” upon Steve Nash’s return. If Nash is back for Game 1 in San Antonio, which he said he hoped to be before the game, he can and should be the Lakers point guard. The realization of the Lakers’ offense is different without Bryant, but also intriguing in its own way. And that intrigue only grows with the idea of adding a healthy Nash to the Lakers’ best offensive weapon last night and moving forward — a healthy Gasol.

As the Lakers needed points down the stretch last night, it was Gasol whom they leaned on to manufacture them. It seemed as though every possession that began with a Blake-Gasol pick-and-roll ended with a Lakers basket, and they came in just about every way: a Gasol turnaround in the lane, a Gasol skip pass to the corner for 3, a Gasol wraparound pass to Howard for a layin. Gasol finished with 17 points, 20 rebounds, and 11 assists — the seventh triple-double of his career, at a time when the Lakers needed it as much as they have all year. In terms of facilitating and becoming the point through which an entire offense runs, it was the type of game no other big man could put together. “He’s the most skilled big man in basketball,” Blake said. “Well, maybe his brother is close.”

Down five with eight minutes remaining, Gasol either scored or assisted on the next five Lakers baskets, the last an Antawn Jamison 3 that gave L.A. an 84-81 lead with about six minutes left. Down that stretch, amid the cheers for every bucket and every rebound, it would’ve been impossible to tell the Lakers’ season wasn’t on the brink. And that’s probably because for much of this year, it had been. It didn’t matter that the Lakers were already in the playoffs. Considering where they’d been, this was the end of the road back, and when Parsons buried a 34-foot jumper to send the game to overtime, it was nothing these Lakers aren’t used to. “I can’t remember if it was Steve [Nash] or Dwight who said it,” D’Antoni said, “but someone said, ‘It’s been hard all year. Why is this any different?’”

It wasn’t. And as Gasol added two more assists and one more bucket, the Lakers had a 99-95 win and a trip to San Antonio.

D’Antoni’s mood after the game was one of a man who had an arena lifted off his back. He joked that he would’ve liked to tell his guys that Utah’s win made no difference, but really, he’d given his brow a thorough wipe just before tipoff. There was an attitude among the locker room, though, that this truly wasn’t it. Gasol spoke to how confident everyone had become, and Howard echoed his statements from that morning’s shootaround that this team wasn’t afraid. “We’ve been through so much as a team that could’ve separated us from each other,” Howard said. “But we stayed strong. We stayed together, and we won for each other. We’re happy we’re in the playoffs, but we’re not done yet.”

On the small whiteboard next to the locker room’s lone TV, a message was scrawled in large red letters.

Way to fight the fight.