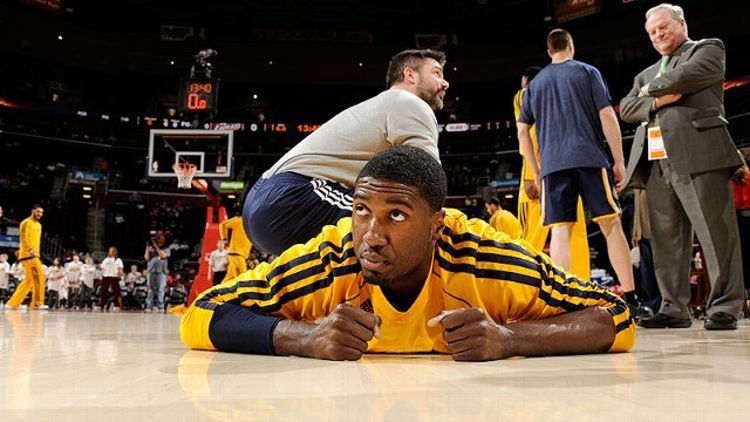 The last time I had seen Roy Hibbert at Madison Square Garden, in mid-November, he was as dejected as any player I’d ever seen. Hibbert is a candid, funny guy — he was on Parks and Recreation, after all — and he admitted to enjoying Grantland’s long profile of him last season. But he just wasn’t up for talking that day. He was in the middle of a horrendous slump that had him shooting below 38 percent well into December, unacceptable for any big man, let alone one who had just signed a post-rookie maximum contract. He had no explanation for what was going on back in mid-November. He just stared at the floor, barely making eye contact, shrugged, and said he was missing the same shots he was making last season. He had no clue why.

He figured out what was going on in mid-December, and he’s been shooting about 48 percent since — not great, but plenty good enough, considering what Hibbert brings on the other end. A much happier Hibbert sat down with Grantland before the Pacers’ loss Sunday in New York. Here’s an edited transcript of our chat.

You were so dejected the last time we talked at length. You had no clue why you couldn’t make shots. But you’re basically fine now. What changed?

I had a wrist injury that happened last year during the playoffs — the right wrist. I had taken it straight up on LeBron, and I fell back on my wrist. It went numb for a couple of possessions, and I had to got get an MRI down in Miami. But we just left that alone. I didn’t think anything of it. And then we started playing this season, and I started shooting more hooks, and when I tried to shoot it straight, it’d go a little bit to the left or to the right.

And that just discouraged me. That’s the biggest thing.

You have a solid lefty hook, though.

I shoot a higher percentage with my right, but I was shooting more with the left. I’m comfortable with it, but I’m primarily a right-handed guy.

So back to the wrist: Were you in pain? How did you figure out that Miami injury was still lingering? And is it totally gone today?

Click here for all of our interviews with fascinating people from the worlds of sports and pop culture.
Well, there was one day [in December] I was lifting weights, and just doing a push press, and I felt a little discomfort and a little weakness. And by chance, we had our specialist in, and I asked if he could just take a look at it. And he said: “Man, this is really out of whack.” My wrist was like this. [Hibbert bends his right wrist back and to the right-hand side, making it look almost crooked.]

You had no clue something was still wrong with it until this incident?

I didn’t even know. The injury had happened like four or five months earlier, so I thought it was just done with. I was lifting and getting shots up in the summer, and nothing was wrong. But once the season started, and I started shooting a higher volume of hooks, the injury got worse. I didn’t even realize it during the summer.

So you’ve been getting treatment on it since that weight-lifting incident, then?

So it really was a case of you just missing literally the same shots you had been making last season because of an injury you didn’t really know about, huh?

Yeah, as soon as a player slumps, the contract questions start.

Ha. It wasn’t that. Yeah, my life has been the same financially since then.

Well, I assume it’s a little better financially. But you haven’t been buying all sorts of crazy new stuff, I guess?

I have the same car from my rookie year — a 2007 Escalade. The only other things I got were a house for my parents and a house for myself. I haven’t really gone crazy.

Well, houses are nice. Back to hoops: You’ve never been a big pick-and-roll player, which is unusual for a big man. It’s not a key part of your game. Is that something you’d like to change? Is there a part of the pick-and-roll — whether it’s setting better screens, or rolling harder to the hoop — that you want to work on?

I’m not the fastest guy. I need to roll out of screens a lot quicker. To tell you the truth, when we get in a pick-and-roll, I just try to make sure I get George Hill or Paul George — get them open. I know more than likely they are going to hit the shot. I’m just not the fastest guy rolling off screens, like an Amar’e Stoudemire or anybody like that.

You’re a good passer, though. So you could sort of slip the screen, catch the ball in space, and pass out from there.

Yeah, but I’m primarily a low post guy here. That’s where I do a lot of my work.

We’ve see you occasionally facilitate from the elbow, with handoffs and passes, sort of like Marc Gasol. I remember there was part of the Miami series last season when you were doing that a lot. But we haven’t seen it as much this season. Any reason why?

We were exploring some options, and that was really fun just to be out there [last season]. And I’ve been working on that as of late.

Warning: There’s only one right answer to the following question. Who is your favorite Parks and Rec character?

Oh, he’s really funny. He’s just not in the show that often.

Man, he is funny. He’s actually gonna go to my wedding and [be] in my bachelor party.

That’s great. The correct answer, by the way, is Ron Swanson.

Ron [Nick Offerman] is a nice guy. I talk to Ron — we had dinner in Indy with a couple of cast members. He’s a funny guy. Really good guy.

Do you care about winning Defensive Player of the Year? Do you think you deserve it?

During the summer I worked on defense, and I take pride on defense. I want to be Defensive Player of the Year. I know it’s about the team, but when it comes to defense, you can be a little selfish. But I don’t think I have a big enough name to really warrant that. I don’t even know who votes, but from what I’ve been told, some computer system said that when I’m in the game, the percentages are low out of all the NBA players.

You mean, opponent shooting percentages are much lower when you’re in the game versus when you’re on the bench?

Yeah, within five feet of the basket, and stuff like that.

That’s not a computer system. Those are actual numbers the NBA tracks.

Seriously? You were an All-Star!

But in reality, it’s politics sometimes. I do think I deserve it, though. I think I’m the best at protecting the paint and guarding my man.

Please admit it: You would hate Tyler Hansbrough if he were not on your team.

I did hate him when I was in college. I thought he was an overrated guy who just lived at the free throw line. But now I have a tremendous respect for him, and his work ethic. When I walk through the garage and into the arena, he’s already there shooting shots before practice — an hour and a half before.

I mean, I probably would hate him, still, if he weren’t on this team.

I can’t remember: Did you play against him in college?

The team has also been playing much better offense since around midseason. Is that as simple as you hitting shots, or is there something else going on? I’ve noticed some more misdirection, some almost tricky plays, but I haven’t noticed any giant X’s-and-O’s changes. Am I missing anything?

[Frank Vogel] has been trying to get the bigs to run a little more, actually. I think our secondary group of Tyler and Ian [Mahinmi] do a little better job of running and getting quick buckets. Like I said, I’m not the fastest guy. But David [West] — he runs more than me, and I think that helps out. Maybe we don’t get the shots when we run, but we lure the defensive players inside, and we can get more open shots out on the perimeter.

Have you talked to David about his free agency yet? Do you feel comfortable encouraging him to stay in a very direct way?

I mean, he left me alone when I was doing my free-agency thing. I texted him during it, and he gave me some advice. But when that time comes, we’ll talk about it.

He’s been so good for you guys — better than a lot of us expected, given his knee injury in 2011.

He’s the reason why I was an All-Star, to tell you the truth.

Just his mind-set, and him being able to guard his man. And if I have the ball, people have to respect his ability to shoot, since I’m such a good passer, and that leaves me one-on-one opportunities. I’m deeply appreciative of having him on the team. He really changed my career.

We Went There: The Lakers Steal the 7-Seed