We Went There: The Lakers’ ‘Nightmare’ Finally Ends 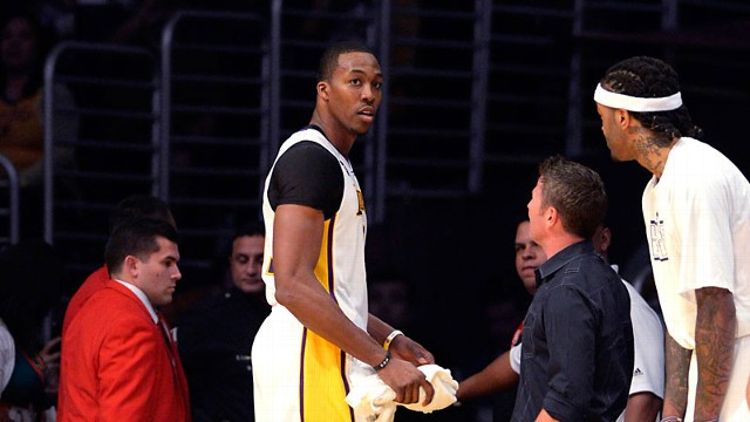 It shouldn’t have been surprising that when it came to the end, this Lakers season would refuse to go quietly. There was a chance for dignity — even down 20 points and staring at the most thorough of playoff drubbings. Los Angeles’s starting backcourt yesterday afternoon consisted of Andrew Goudelock and Darius Morris. If all the Lakers had done was stuck to their theme for this series — We stuck together, we never gave up — no one could’ve asked for much more. But that would’ve been too simple. These Lakers were a spectacle from the start, and they’d end the same way.

“It’s like a nightmare,” Dwight Howard said afterward. “It’s like a bad dream, and we just couldn’t wake up.” That the lasting image of Howard’s first season in Los Angeles is of him heading toward a darkened tunnel with 10 minutes left in the third quarter of a playoff game is probably fitting. For much of the season, the endless criticism of the Lakers’ newest star was probably overdone. It was obvious early on that the back injury that ended Howard’s season a year ago hadn’t fully healed, and he spent a majority of the season, physically, as a shell of his dominant self. Trouble always manages to find Howard, though, and plenty of that seems to be his own doing. As he left the floor following his second technical, Howard turned as he passed Lakers GM Mitch Kupchak and hurled some words back toward the court. It isn’t clear for whom they were directed, and it probably never will be. “I can’t even remember,” Howard said when asked about the interaction.

Just after the Howard commotion had subsided, a cheer began to grow from the crowd outside that same tunnel. It started small, but soon, that entire side of the arena was on its feet, making noise unlike any that had been heard all day. It was Kobe Bryant, crutching his way out toward the Lakers’ bench. There will be plenty of theories and explanations for that timing as fans and media give their postmortem on the 2013 Lakers, but one thing that’s safe to say is Bryant rarely does anything on accident.

The basketball parts of Sunday afternoon went as would be expected. L.A.’s overmatched backcourt gave the Spurs the ball all game, and turning it over 21 times against a team needing no help is usually enough for disaster. There was no quick flurry of 3s or notable Lakers drought that signified the day. The Lakers bled out slowly, in the same manner the Spurs’ victims normally do. There’s a certain vigilance required while playing San Antonio, and a decimated roster on the verge of elimination isn’t going to have it. Fans with railings in front of them spent much of the day with their feet up, giving the obligatory amounts of attention and energy for a playoff game featuring the league’s signature franchise, but nothing more. Even the “We want Phil” chants couldn’t pick up any steam.

There was one more relevant moment left to be had, and it came with about three minutes remaining in the first quarter. At first, the crowd’s temporary interest was in cult hero Robert Sacre heading to the scorer’s table, but soon, irony turned to sincerity, in what was probably the only redeeming moment of the day. Pau Gasol made his way to the bench to a standing ovation from the Lakers’ crowd. He gave a small clap as he did, acknowledging what this was just as they were. For two years, Gasol has been open about knowing that he could be gone at any time. This exchange was just the next step, if not the final one, of that reality. Gasol is set to make more than $19 million next season, and considering Howard’s place as the franchise’s future and Kupchak’s public endorsement of Mike D’Antoni, Gasol stands as a reasonable casualty of the disaster this season has been. His play over the past month has been doubly valuable to the Lakers. Not only did it help them get to the playoffs, it showed everyone across the league that Gasol is worth having.

The next six months will be filled with talk of Achilles and amnesty, but the question of the future began for Howard the moment he left the court. When discussing how he recovers from the year it’s been, Howard answered each question with “we.” Asked if that meant if he planned on being back, or if too much was being read into his words, Howard bluntly replied, “You’re reading too much into it.” After his time on the podium ended, Howard stopped off for a brief TV interview before making his way through the back tunnel of Staples Center. Flocked by one person on either side, his massive frame slowly disappeared toward the exit, and soon, we’ll know how long before it’s back.

Wrapping Up the NFL Draft Weekend