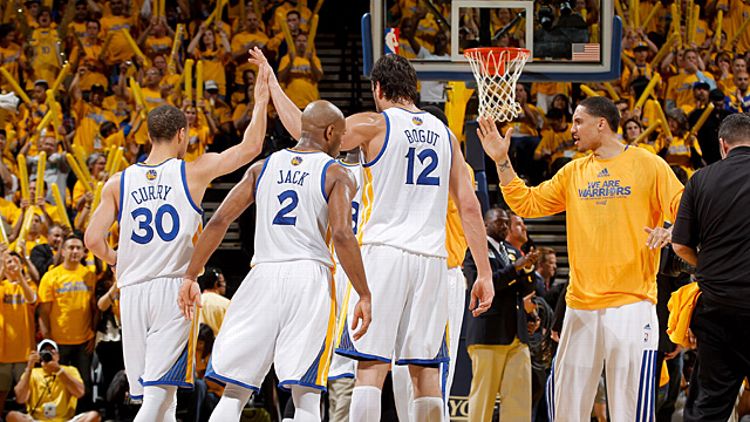 Phillip Thomas just wanted everyone to put on their damn T-shirts.

This was Friday, about 5:30 p.m. in Oakland, on the north end of a still mostly empty Oracle Arena. The Warriors and Nuggets were still tied, 1-1. Steph Curry had not yet shot his way to the moon and back. Andrew Bogut had yet to put JaVale McGee in a GIF. It was not yet a time of triumphalism, but of possibility. Also: a time for yellow T-shirts.

“Where your shirt at!?” yelled Thomas. He’s an usher and a security guard and a guy who wears a blazer and a headset (both of which let you know: He runs shit). He was yelling at someone who was wearing a green polo — or, more importantly, someone who had the gall to rock anything but a yellow T-shirt. The shirts — which said “We Are Warriors” on the front — had been given to every staff member and placed on every seat, and after the 13 years Thomas had worked in this arena, he wasn’t going to let people off the hook for refusing to wear the right shirt.

Oakland had waited six years for this past weekend. Six years since the eighth-seeded Warriors shocked the top-seeded Mavs, six years of horribly timed injuries and ill-advised jump shots, of saying to each other, “Were you at Oracle in ’07?”

Memories of that year made an impression in places besides Oakland. The Nuggets came into the series with a vague sense of what to expect. “You talk to your young players about the stage we’re on,” Denver coach George Karl would say. “Winning in these kinds of places is a tremendous, internal, soulful type of experience.”

In the Denver locker room before Game 3, one Nuggets staffer said to another: “Everyone talks so much about this arena. I don’t know if it’s going to be all it’s supposed to be.” The second staffer shot back: “I promise you, it will blow ours away.”

Did it? Yeah, I think it did. Not because Denver’s atmosphere is bad, but because there is no other atmosphere, at least in these playoffs, like Oracle. There are no other fans who insist on standing up for damn near every possession; who vacillate between chants of “Ref, you suck” and “Ref, you’re good” with a chamber choir’s precision; who cheer in rhythm for every last player on their team and then, when they’ve run out of players to scream for, break into chants of “Let’s go media!” just because even in a blowout, they still need a reason to yell.

I’m not sure if other crowds have forced their own team to change defensive strategies. (The Warriors had to standardize their pick-and-roll defense in Game 3 because the guards couldn’t hear the big men’s calls.) I’m not sure if other coaches have entered games joking about the need for earplugs. (George Karl did.) But I am confident that in no other arena, at least not in these playoffs, have there been moments quite like the most thrilling ones from Sunday night.

First, there was the Bogut dunk. If you haven’t watched it, then please do, and know that at the moment Bogut dunked, it got loud. But know also that the loudest moment of the sequence actually came a few minutes later. The crowd looked at the video screen and saw a replay of Bogut’s slam, and then they saw him yelling and clenching his fists as he ran downcourt, and it was that image — not the image of Bogut dunking, but rather the one of him screaming — that turned the whole place apoplectic.

Second, there was Steph Curry in the third quarter. With a couple minutes left he lofted a finger roll and drew a foul and put the Warriors ahead by some insurmountable number. Again: loud. Then he walked to the sideline and, Curry himself, clapped for the crowd. Louder. Like with Bogut’s dunk, the biggest noise came not for the play itself, but for the reaction to the play. And so 18 seconds later Curry hit a 3 and immediately the Nuggets called timeout, and on his way to the bench he chest-bumped Bogut and then high-fived Jarrett Jack and he drifted back to the crowd again, this time reaching out and smacking the hands of Warriors owner Joe Lacob [thanks, readers!]. At this, the noise became so loud that it infringed not only on your ability to hear, but also to smell and see.

The game was over. The series had changed. And by reaching into the crowd, Curry acknowledged this was not only a star-making performance and a dominant win. It was a collaboration. It was team and crowd, willing each other to a place that, without the other, they never could dream to go.

Filed Under: Denver Nuggets, Golden State Warriors, We Went there

We Went There: The Lakers' 'Nightmare' Finally Ends