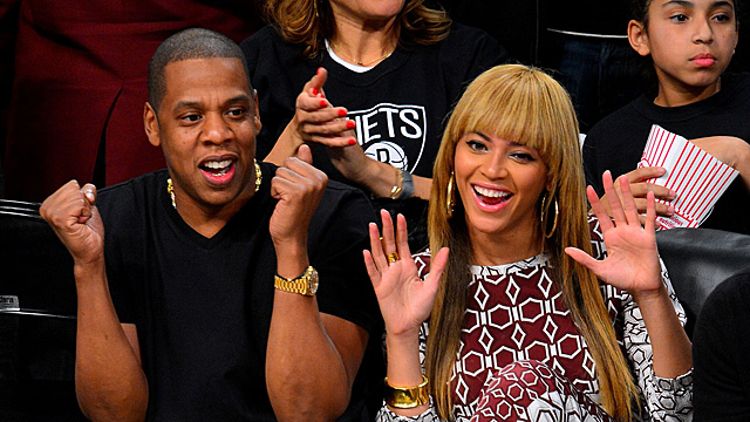 On Saturday night, a national television audience watched the Brooklyn Nets defeat the Toronto Raptors in the transplanted franchise’s new home. From your soiled barcalounger, you may have heard the “Brooooooooooklyn” chants and seen Brook Lopez draw countless foul shots with his herky-jerky release. But you missed so, so much. Here’s an on-the-ground report of what really went down in the mean seats of the Barclays Center on opening night.

Jay-Z and Beyoncé sat front-row but resisted the urge to trip a referee. Elsewhere, Ralph Branca and Joe Pignatano, vulnerable codgers from the Brooklyn Dodgers, were swindled by ceremonial jersey exchanges with Deron Williams and Lopez. I assumed every skinny, world-beaten gentleman in a flat-brimmed leather fitted was Papoose, so we can plausibly say he was in attendance. Another locally sourced fan was spotted when one of the ginger-bearded chocolatiers from Mast Brothers popped up on the big screen and danced for our amusement like an orange-maned circus bear. The world’s all just one big gummy glob of nougat to those goddamn chocolatiers.

Michael K. Williams, who played Omar Little on The Wire, may not technically have been in the arena, but he starred in a PSA broadcast before both halves. In the clip, a man best known for robbing Baltimore heroin dealers with a shotgun warned ill-mannered fans that cussing would not be permitted. As he described outlawed behavior, a video snippet showed the scene from Do the Right Thing of Mookie throwing a trash can through the window of Sal’s restaurant. The message was clear: NO RACE RIOTS IN THE HOUSE THAT MIZRA TELETOVIC BUILT. According to Omar, anyone who disobeys these rules will politely be asked to leave, then dusted with lye and nail-gunned into a vacant.

10 Jay-Z Songs Played During the Game, Presented in Chronological Order by Release Date

Two songs from Kingdom Come and none from Reasonable Doubt? Not fair to Blue Ivy. She deserves to know about taking Frito to Tito in the District, about Fraud Willie’s gambling their re-up, about vendettas in dice games against ass-bettors. Do not allow her to grow up believing that her dad is the guy from Budweiser Select commercials. You know what, though? It’s pretty amazing hearing a song with Uncle Murda played at a family sporting event (even if it was just the instrumental).

Before tip-off, the arena lights dimmed and a motionless figure — suspended by a wire that appeared to be around his neck — slowly descended from the ceiling. I thought OH MY GOD A MAN IS BEING HANGED AT A PROFESSIONAL BASKETBALL GAME SOMEONE DO SOMETHING. Fortunately, it was just the arrival of the Brooklyn Knight, a new mascot that wears a shiny tin wastepaper basket on his head.

At halftime, fans who remained in their seats were treated to a performance by Mr. Hip-Hop Violin Svet. Apparently designed to enrapture fans from both Brighton Beach and Brownsville, the Situation-like twofer wore sunglasses and fiddled over the instrumental from Drake’s “I’m on One.” Following his antics, he tweeted: “BK fans go hard. love u guys #TeamSvet.”

David Stern, a malevolent warlock, got bombed by the boo-birds as he waddled onto the hardwood to bestow important words about New York’s resilience or Brooklyn finally becoming a world-class city because of Bruce Ratner’s generosity. Former Knick Landry Fields got served up a helping of mockery during introductions and when he first touched the ball, which suggested substantial local fan crossover. Even the PA announcer morosely sighed “Landry Fields” as if he was listing side effects of lupus medication.

Another subject of verbal disdain was the home team’s defense. With 44 seconds remaining in the first quarter — after Toronto repeatedly coaxed ponderous Brook Lopez into the pick-and-roll blender — the Brooklyn Nets were booed by their own fans and history was gloriously made.

Rasheed Wallace is only two games into his Knicks career and already more beloved than any non-Asian New York basketball player since Anthony Mason. How can the Nets hope to match his surliness, bulkiness, or ability to make comical 3-pointers in garbage time? Judging from crowd reactions, here are the top candidates for the role:

MarShon Brooks: Youthfully energetic, pulled off a sweet behind-the-back dribble, kind of looks like a friendly cartoon dog.
C.J. Watson: Scored some points, made a 3-pointer at the end of the first half that made people merry, named C.J.
Reggie Evans: Single-handedly strong-armed the Nets into playing defense, participated in a video segment where he donned a Jheri-curl wig to give slices of pizza to children, happens to be Reggie Evans.

About Last Weekend: You Don't Mess With Bama