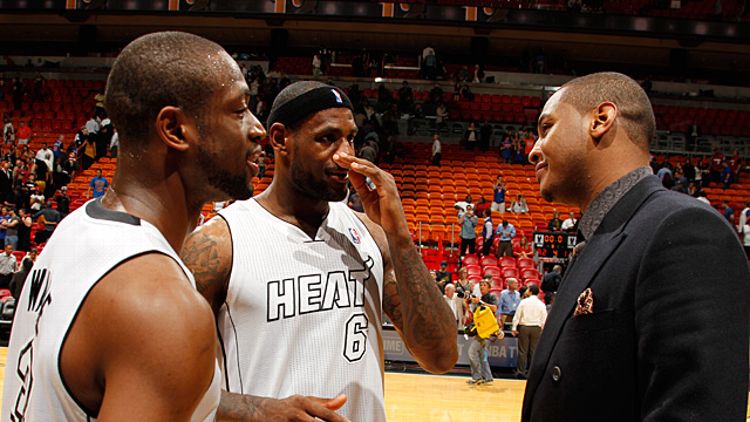 For most of the year, Miami is for Lamborghini-driving Argentines and frat bros with barbed-wire tats at Wet Willie’s. But for a brief, fragile window, during the annual Art Basel, the city is Little Downtown New York. Whether by happy accident or cunning scheduling, the Knicks just happened to play the Heat right in the middle of Art Basel this year. Adding to an orgiastic week of art shows, musical performances (A$AP Rocky rapping at the Delano Hotel), parties with gratis champagne, and half the taggers from Bushwick skateboarding into the Design District, there was also a matchup between the two best teams in the Eastern Conference. Advantage: David Stern.

This couldn’t have been more different from the first time the Knicks and Heat tangled. Held in the immediate aftermath of Hurricane Sandy, the game took place when parts of New York were still shrouded in darkness, when subways were flooded and the battered citizenry was subsiding on Utz bodega chips. Miami might not have tanked, exactly, but it’s difficult to imagine Coach Spoelstra delivering a fiery oratory in which he pounded on lockers and demanded that his soldiers send the fans in Madison Square Garden back to their cold, dark rat traps in sadness. After absorbing a pounding from the Knicks, members of the Heat smiled and embraced their temporary betters. That’s not usually what occurs when a team gets the breaks beaten off by a conference rival in a season opener.

But last night’s game? Everyone knew that one counted.

Maybe the Heat were thinking about the Knicks when they inexplicably lost to the Wizards the other night. And maybe the opposite was true when New York needed J.R. Smith and his salsa moves to escape the Bobcats. Who cares? The horizon shimmered with meaningfulness. Knicks! Heat! Art Basel! Rick Ross and Lyor Cohen buying paintings and hugging and Instagramming each other!

Then Carmelo Anthony sat out.

So this game would have another asterisk. Stern fined the Spurs for sitting out a cadre of stars, but Anthony’s absence was no less of a void. Whenever the Heat get on national television, no one shows up to play them. Even Iman Shumpert wasn’t available to have a flattop-off against Norris Cole. The only thing that lifted heavy hearts was watching LeBron James rap verbatim to Trinidad James’s “All Gold Everything” during warm-ups (sadly, the camera cut away right before the golden “Pop a molly / I’m sweatin'” line).

Early on, the mood was festive at AmericanAirlines Arena. Within the arena is a restaurant and club called Hyde, which is ideal for those who crave an instantaneous injection of nightclub energy. During halftime, they black out the big-screen TVs, start blasting “Danza Kuduro,” shoot confetti from the ceiling, and have waitresses ferry illuminated bottles of vodka to dudes standing on banquettes. It was packed. Because in Miami, the idea of going 20 minutes without being in a club is fucking terrifying.

On to the second half, though.

Much has been said about Carmelo Anthony and the Knicks’ newfound dedication to defense, but they’re ranked a mediocre 13th on that side of the ball (when adjusting for pace). But New York is exceptional on offense. The improvement has come from a variety of sources: Amazing efficiency from Jason Kidd and Tyson Chandler, typical blue-collar contributions from Ronnie Brewer and timely pitch-ins from Smith and Raymond Felton. Then there’s Anthony, who has doubled his career average in 3-point attempts and become a more efficient scorer than ever before. The upside of his stint on the sideline is that New York isn’t lacking guys who can shoot the ball from really far away.

Last night, they took 44 3-pointers and made 41 percent of them. Felton, Kidd, Smith, and Steve Novak all took at least eight. The Knicks had six players in double figures, the same amount as in the season opener. Even while trotting out comedy troupe lineups like Kidd, Novak, Rasheed Wallace, Pablo Prigioni, and James White, the Knicks were effective. If the Miami and New York games of yore were hatchet fights between bruisers like Larry Johnson and Alonzo Mourning, this is more like Lazer Tag — except the Knicks are the only ones with a gun.

After the Heat carved into the Knicks’ lead to make it a 10-point game going into the fourth quarter, the Miami crowd came to life. James (LeBron, not Trinidad) is so much better at basketball than anyone in the universe that there’s always a chance he’ll exhale a Wind God breath and the court will disintegrate into matchsticks. There were stretches of the game when no one on Miami did anything except wait for him to score or spoon-feed them layups. And yet it never happened. Also, I can’t remember seeing Chris Bosh or Dwyane Wade actually on the floor, but somehow they combined to play for 62 minutes.

With about four minutes left in the game, Chandler piked down a dunk and the Miami fans streamed for the exits. The speed in which the stadium bled out was astounding. An older Knicks fan (bald, stocky, tight black muscle shirt) twisted and addressed the remaining Heat faithful. “You oughta be ashamed of yourselves,” he barked at everyone in particular. “Look at this place. Nothing but front-runner fans.”

Moments later, a “Let’s go New York” chant started, as men wearing jerseys emblazoned with the names of Anthony and Stoudemire and even Bill Walker stood proudly to troll the suddenly outnumbered and silenced Heat fans. By game’s end, the halls of AmericanAirlines Arena echoed with screeching Knicks fans who were high-fiving and chortling and bellowing and generally being precisely as obnoxious as you would expect. Both in the stands and on the court, last night opened up an exciting new front in New York’s annual Art Basel invasion of Miami.