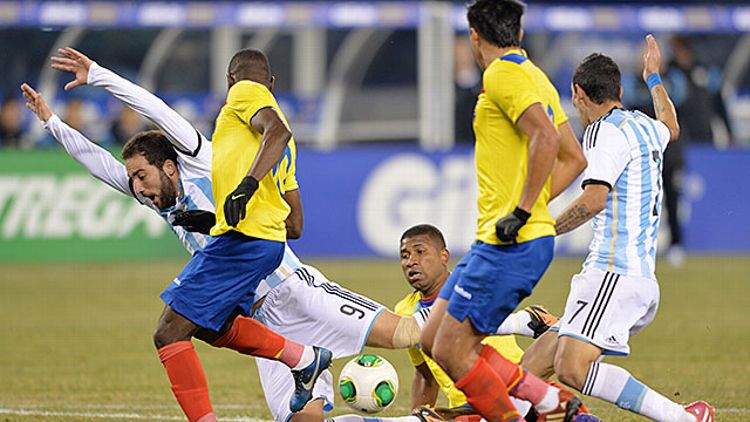 At kickoff, the little man was not in the building. As his Argentina teammates lined up to battle Ecuador at MetLife Stadium on Friday night, Lionel Messi and his otherworldly talent were in Barcelona recovering from a hamstring tear that will sideline him for the rest of the calendar year. But the game must go on, especially when the game is part of the Gillette International Soccer Series, a number of friendlies between talented international squads like Brazil, Chile, and Honduras hoping to make a quick buck in the United States.

Even without their talisman, La Albiceleste brought a powerful side to New Jersey, featuring Messi’s Barca teammate Javier Mascherano, Real Madrid’s Angel Di Maria, and the Manchester City duo Pablo Zabaleta and Sergio Aguero, among others. It was the evening’s second team, however, that was the focus of the fans. The New York City area boasts a high percentage of Ecuador expats — here’s more than you could ever want to know about Little Ecuador in Corona — and their yellow jersey–clad fans made up the majority of the crowd in place at the beginning of the match. (MetLife’s first sellout was a 2010 friendly between Ecuador and Mexico.) In defense of the rest of the world, it was 49 degrees at kickoff, the temperature was dropping, and, we’ll state this again, Messi wasn’t in the building.

Manchester United’s Antonio Valencia, Ecuador’s only real star, drew the biggest ovation during the pregame introductions. Felipe Caicedo, who led his country with seven goals during its successful 2014 World Cup qualifying campaign, also made the trip and earned loud cheers when the announcer called his name. He looked ready and OK with the cold. Playing for Lokomotiv Moscow will do that to a guy. Right before the whistle, the Ecuadorian side — 100/1 to win next summer in Brazil, according to bookie William Hill — huddled together in one final moment of togetherness. Argentina (9/2, tied with Germany and behind only 10/3 host Brazil) stood waiting in its 4-3-3. It had things to do, places to be, and goals to score.

Not that it would. The best chance of the early going fell to Ecuador. Winger Jefferson Montero, who had his way with Fiorentina central defender Facundo Roncaglia in his first Argentina cap, lofted a left-footed cross into the box. It was one of those balls that hangs tantalizingly in the air and gives fans a chance to rise to their feet in anticipation. In slow motion, the ball glided over one defender, an attacker, and another defender as the Ecuadorian support stood. The stadium grew quiet for a split second as Valencia approached from the far post. The next moments were clear: head meet ball, then ball meet net.

Or not. The captain couldn’t deliver for his troops. Ninety percent of the stadium was out of its seats, screaming support with arms raised in celebration, when Valencia’s header slammed off the post and ricocheted out of play for a goal kick. The sloppy letdown didn’t matter, of course, but one suspects those types of chances can’t go unfinished if Ecuador plans to advance beyond the group stage next summer.

There were other signs the match in the Meadowlands was merely a friendly. Midway through the first half, Ecuador’s Christian Noboa managed to take a sizable divot out of the midfield grass. Instead of running back and helping in defense, he considerately replaced it like a Sunday afternoon duffer who grounded his 3-wood on the back nine after his third beer. In general, the shoddy state of the turf slowed the game considerably as the ball took strange skips or didn’t bounce true. In less than 40 hours, the New York Giants would host the Green Bay Packers, so the extremely temporary nature of the grass was understandable. Roll it up and move it out.

Although it controlled most of the first half, Ecuador couldn’t find the net, and Argentina began the second half with a renewed vigor. By this point, the fans had filled out the lower bowl and most of the second ring as well on the way to an attendance of just less than 50,000. The yellow jerseys, however, were increasingly hidden under an extra layer of jackets.

Di Maria, especially, seemed more lively. The winger found space on the right, cutting onto that left foot he loves and ripping a few shots. When the first two efforts couldn’t find the frame, he recalibrated. Unfortunately, the next two chances could only find the hands of Ecuadorian goalkeeper Alexander Dominguez. Argentina kept pressing, but for naught. Here we see the riddle of Argentina sans Messi. Di Maria and his attacking cohort continued unsuccessfully trying to force a round ball into the square hole that is the net. When Messi’s around, he shows them another way. Guys, just put it here, he smiles, effortlessly sliding the ball into a spot where the goalie isn’t.

It wasn’t to be on the MetLife sod. After the hour mark, the match turned into a parade of substitutions that created a disjointed affair. Sergio Aguero came on for Ezequiel Lavezzi, but he would have no success. Fidel Martinez took Jefferson Montero’s spot, notable not so much for the switch itself but for the sub’s excellent blond hedgehog Mohawk. In the 79th minute, Maxi Rodriguez replaced Ricardo Alvarez Puig. Three minutes later, the crowd did the wave for the first time of the night, trying to keep warm and, possibly, will a tally from either side. No one wanted a goalless draw.

It almost worked. In the 88th, an Argentina attacker sent a cross that found Rodriguez. The oldest player on the roster teed it up as he has done thousands of times before and blasted a shot at net. He hit it true but straight off the crossbar. The Newell’s Old Boys midfielder would not be a hero. On this night, no one would.

Soon after the 90-minute mark, the final whistle blew. The players shook hands, then quickly walked off the field. They had another match in another city in a few days. Argentina will play Bosnia and Herzegovina on Monday in St. Louis, and Ecuador will face Honduras on Tuesday in Houston. Even Messi can’t stop international soccer from marching into the future.