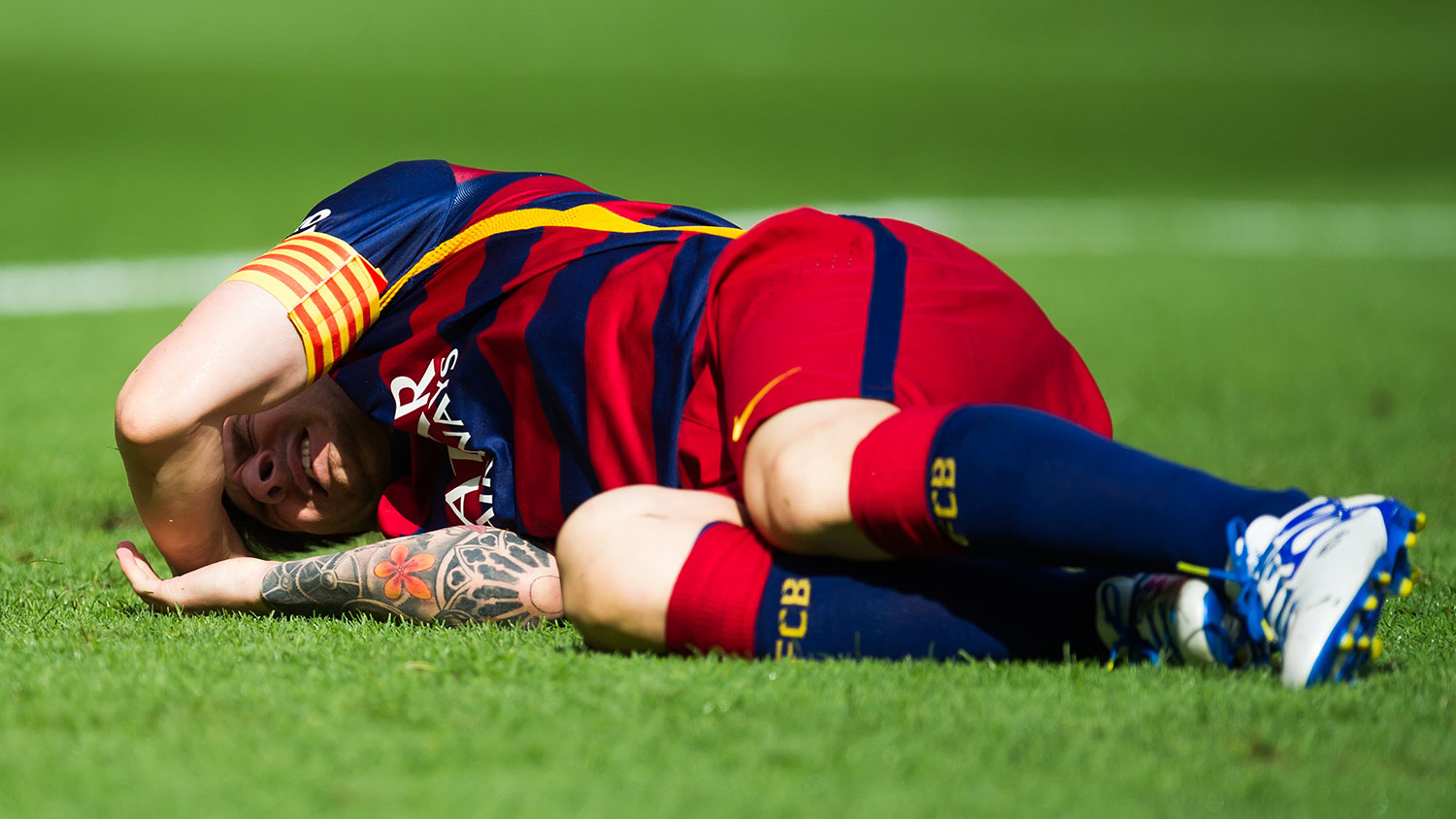 When you’ve been as good as Barcelona over the past decade, you don’t get any sympathy — not even when Lionel Messi tears a knee ligament and is set to miss seven to eight weeks. Fair or not, that’s how the sliding scale of club-related compassion works: For one of the biggest and best teams in the world, every setback should only be a speed bump — even if it’s shaped like the best player in the world. So, if you’ll allow us, it’s time to ask the un-ask-able …

Will Losing Messi Even Be That Big of a Deal?

I know, I know. He’s LIONEL FREAKING MESSI. But when the other two-thirds of the attacking line are Luis Suárez and Neymar, it’s a question that you have to at least consider. They’ve got three of the top 10 attacking players in the world, and they should be able to survive losing one of them, right?

A number of models suggest that Barcelona have more than enough talent to survive until November 22, both the date targeted for Messi’s return and the date of the season’s first game against Real Madrid. Yet those models also come with caveats — namely, that it’s hard to make accurate predictions about only eight games spread over two competitions. Plus, the last two La Liga titles have been decided by a combined total of five points.1 So, sure, Barcelona might only be expected to lose between one and four points, but the difference between one and four points could easily cost them the title.

Then there’s the schedule over the next two months. Eight games in eight weeks doesn’t seem like a lot, but during that time, there are two separate international breaks. That is a nightmare for Argentina, who play four World Cup qualifiers during Messi’s injury window, and while it may lessen the number of matches Barcelona play, it also condenses the schedule. Six of those eight games come over a three-week span from October 17 through November 8. So it’s not just about finding a lineup that can get by until Messi returns, it’s about figuring out multiple lineups that give the next men up — Suárez, Neymar, and Andres Iniesta — the requisite rest. That, then, could mean fielding lesser lineups in the Champions League: Only grabbing a point against Roma two weeks ago now looms a little larger, but after playing Bayer Leverkusen this week, Barcelona gets two European games against lowly BATE Borisov before Messi returns. If Luis Enrique wants to find pockets of rest for his key guys, that pair of matches would be a good place to do it.

Shouldn’t This Team Have Enough Depth?

The timing of Messi’s injury is particularly painful for Barcelona because the team had already chosen/been forced to undertake the first half of the season with a relatively thin squad. Thanks to a yearlong transfer ban, they can’t play anybody they signed over the summer until the January transfer window.2 Barcelona knew new recruits Arda Turan and Aleix Vidal wouldn’t be available until the next calendar year, but that didn’t stop the club from planning for this season like they’d be available. Not only was Pedro sold to Chelsea, but some of their older — if slightly less prized — prospects were sold, too.3 Instead of providing depth through lean times, Adama Traore and Gerard Deulofeu are now playing for Aston Villa and Everton, respectively. And to top it all off, Rafinha, the most versatile and developed of all of Barcelona’s homegrown talent, tore his ACL two weeks ago and will likely miss the rest of the season.

Necessity is the mother of invention, of course, and in response to a thinning squad, Enrique has made some creative decisions to keep Barcelona ticking. After Dani Alves went down with a groin injury, Enrique replaced him with Sergi Roberto, a stalled midfield prospect who now looks at home as a right back.

In attack, however, it has almost always been Messi who provided the tactical flexibility to let Enrique negotiate the various personnel obstacles he’s had to overcome. Last season, before Neymar got healthy and Suárez finished serving his biting ban, Messi began the season as the primary goal-scoring focal point he’d been since Pep Guardiola’s final years with the club. Then, with the front line finally intact, he switched to the right wing — a move that was instrumental to the carnage Barcelona wrought across the known soccer universe. Come this season, he even filled in as an attacking midfielder against Levante so that Sandro Ramirez and Munir El Haddadi could join Neymar up front while a few key pieces got some rest. With an injured Rafinha and an unregistered Turan, the same questions still exist, but without Messi, the answers will need to change.

How Do You Replace the Best Player in the World?

We’re all familiar with Messi being awesome. It’s the one where he careers toward goal with the ball at his feet, then plays a series of one-twos and physics-bending chips that ultimately result in either him or somebody else scoring from point-blank range among the smoking rubble of what used to be a defense. Or, alternatively, it’s the one where he saunters around, seemingly disinterested, until the ball, as if by magic, finds his feet for the perfect touch. You know, like this:

Again, this might sound crazy, but when we talk about Barça’s attacking talent, it’s hard not to say: Messi’s raw awesomeness is probably the easiest part of his game to replace. As incredible as he is, this form of Messi is the world’s best goal-producing striker. And though neither one is quite as good, both Neymar and Suárez are great at producing goals. They’re each superstars, and each has plenty of experience being the gravitational force at the center of an attack. It’s just that now they spend most of their days orbiting Messi, because while Jupiter’s pretty big, the sun’s even bigger.

Then there’s the second role: Messi as central provider. Here, he comes inside, draws all the attention to himself, and then casually sprays a perfect pass out wide to a streaking Jordi Alba, who either hits a first-time ball back across the box or does this:

Barcelona relies on this pattern somewhat frequently. This season, Messi has completed 4.44 passes per 90 minutes to the left back.4 This is Barcelona’s answer to teams that clog the middle of the field to stop Messi from being awesome, and it’s going to be exceedingly hard to replicate without him. The team will still have plenty of midfield passers in his absence — Iniesta is the consummate, all-around, defense-unlocking attacking midfielder, Ivan Rakitic came to the club as a creative midfielder and his passing skills have actually been somewhat underutilized so far, and Sergio Busquets is one of the best transitional passers in the game — but this move is about more than just having passers.

What makes the left-flank riposte so deadly is how unconventional the rest of Barcelona’s positioning is, and that starts — surprise! — with Messi. In the above goal, he’s a right winger who has dropped into a central midfield role, while Neymar has moved from his left wing role to partner inside with Suárez. Meanwhile, the two Barcelona midfielders ahead of Busquets are constantly probing and interchanging with each other and the front three, threatening to facilitate one of those “Messi being awesome” moments. With Suárez and Neymar near the goal, Messi hovering, and the midfielders cycling, there’s too much for the defense to account for, and Alba creeps unnoticed up the left. Without all of those factors, the defense isn’t forced to make the same difficult choices. Even if somebody were to replicate the passing Messi provides, defenses still wouldn’t be coaxed into the number of mistakes that leave Alba free.

And then there’s perhaps the most unlikely Messi of all: the springer of fast breaks. This is the biggest change Enrique brought to the club and the factor that most differentiates him from Guardiola. The team is now willing to counterattack at speed, especially late in the game against good opponents pushing for an equalizer. Sometimes the midfield and defense will even stay home, leaving Messi, Neymar, and Suárez high up the field to terrorize teams on the break. There’s no reason to think that the team can’t counterattack without Messi. Although they’ll obviously be worse at it, plug in Munir or Sandro with the other two, give Barcelona a one-goal lead, and the counter should still be deadly.

The larger problem for Enrique, then, isn’t replacing one specific mode of Messi; it’s replacing one player who could function in three separate roles all across one game. With Messi, Barcelona could switch modes at will. They could start with Messi orchestrating the play by dropping into the midfield, and then, if the back line appeared there for the taking, he could slide forward and rip them apart. If not, he could play those special little balls to Alba. The approach could change and Enrique wouldn’t have to waste any subs.

Without Messi, Barça still might be able to play multiple styles, but they won’t be able to do it without changing personnel. Munir and Sandro are likely to get minutes. And to overgeneralize: Sandro is more of a goal-scoring winger and Munir more of a creator. You might expect to see Sandro deployed when the game plan is for Neymar to have the ball at his feet a lot, standing in for Messi as the focal point and breaking down defenses with his dribbling. If Suárez is featured heavily, Munir might make more sense, as he’s both comfortable staying wide to space the field and more able to act as a provider for the center forward. Neither, however, will drop into the midfield from their wide role to provide an extra body. If Enrique wants that, he’ll need to resort to the Guardiola tactic of moving Andres Iniesta into the front three and playing a midfield trio of Busquets, Rakitic, and either Sergi Roberto, who is now freed up by Dani Alves’s return, or Javier Mascherano, who’d be a more defensive option.5

Last year, Barcelona reached rarely seen heights because Enrique took a finely tuned possession engine and added a few different gears to it. It made them harder to defend, and it also meant they were better able to adapt to changing circumstances like injury or suspension. The key to those changes, as with everything else, was Messi. Without him, they still have more talent at their disposal than almost any other club, but the margins at the top of La Liga could be so tight that “almost” is actually enough for them to lose out. The next eight weeks will be Enrique’s biggest challenge yet, and while it’s still early, the defining stretch of Barcelona’s season looks like it’s already here.