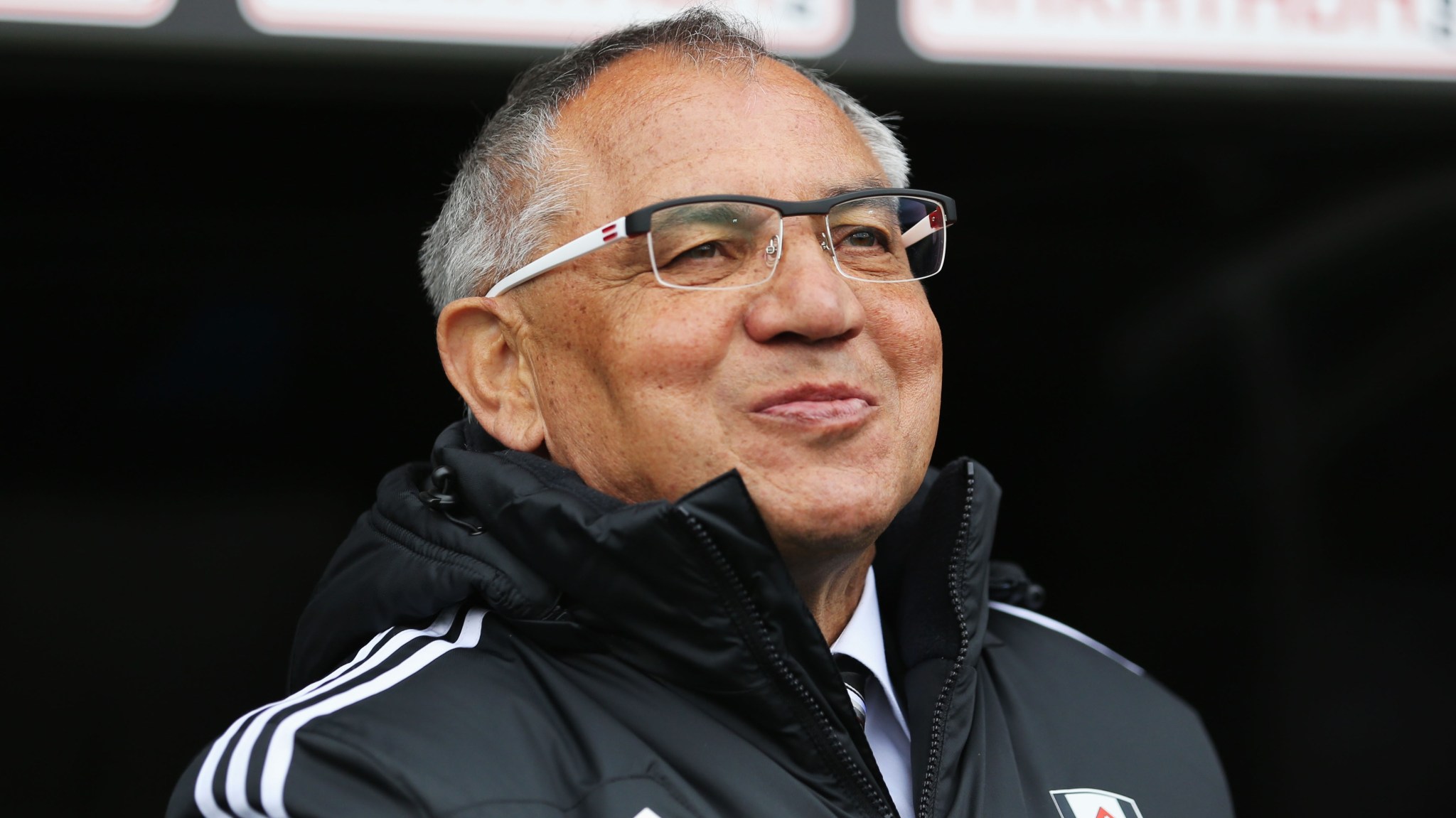 During a weekend when the Premier League might very well have been decided in a classic in Liverpool, I found myself in London. Oh well. I don’t think I could have afforded tickets to the title-decider, anyway. What I got to see instead in the capital was a pair of matches with great atmosphere. Fulham gave their hopes of avoiding relegation a boost by beating fellow strugglers Norwich 1-0 on Saturday, and Hull City pushed their way into the FA Cup final against Arsenal with a thrilling 5-3 victory over Sheffield United at Wembley on Sunday. I came away from both matches thinking the same thing: Wow, do managers really matter. Proper player management might have won both tries.

Shahid Khan’s tenure as a sports owner has not exactly gone swimmingly. Since buying the Jaguars in 2011 and adding Fulham to his portfolio this past summer, Khan’s two franchises have had a combined record of 17 wins against 51 losses and three draws. Each team has also gone through three managers/head coaches under Khan, but it also seems fair to say he did an excellent job in hiring the current steward for each team. The Jaguars needed a patient, positive coach who could foster a sense of growth and stay optimistic while the team rebuilt, and Gus Bradley has received nothing but positive reviews during his first season in Jacksonville. In London, with less than a half-season to go and Fulham desperate to avoid relegation, the Cottagers needed a taskmaster who would whip them into shape, even if it meant scorching some earth. Enter Felix Magath, the “Last Dictator in Europe.” Magath is roughly characterized as the entangled DNA of Tom Thibodeau and a lunatic, and you would never plan on building around him as a long-term manager, but he’s the perfect high-variance manager to try to lead a team going nowhere to short-term competence.

On Saturday, Fulham’s win was in Magath’s image. Known for making curious personnel decisions, Magath avoided both of his predecessors’ high-priced signings and instead found his two match winners. Former Roma goalkeeper Maarten Stekelenburg, signed for £4 million this summer, was again left on the bench in favor of long-serving reserve keeper David Stockdale, who made a stunning pair of saves in the first half to keep the match scoreless. Later in the half, the game’s only goal was scored from a set piece by striker Hugo Rodallega, who would also claw a would-be Norwich equalizer off the line in the second half. Rodallega, signed on a free transfer in 2012, was playing ahead of Konstantinos Mitroglou, who failed to even make the match-day squad. Mitroglou, who was Fulham’s record signing in January at £12 million, has started just once since former manager Rene Muelensteen bought him from Olympiakos, with Magath suggesting that Mitroglou isn’t fit enough to play. His most important role with the club these days is to serve as the huffing and puffing veteran in the Magath turnaround montage.

Fulham are hardly a brilliant side, but they were certainly a committed one on Saturday. The wisdom of Magath’s methods could be seen in the second half. While Fulham were sloppy in giving away possession and too prone to laying on long balls for Rodallega during the first half (hi, Brede Hangeland), their heightened level of fitness showed during the final half-hour, when they were the far fitter — and better — side. It took a while for Magath to sink in, but now, as other sides tire, Fulham have won two matches in a row and three of their last five. They had just six wins in their first 29 league games.

For whatever sound logic went into Fulham’s decision to appoint Magath, Norwich’s decision to sack Chris Hughton on April 6 and replace him with youth coach Neil Adams seemed equally unsound. Hughton was sacked after a loss against West Bromwich Albion in which his team hit the bar twice in the second half. With five games to go, it’s exceedingly difficult to imagine that anybody available on short notice would have both the tactical nous and knowledge of the players to drastically improve Norwich’s chances of staying up for another season. Turning the club over to Adams, who has no managerial experience above the Under-18 level, seems bizarrely desperate. If you want to appoint Adams, why not wait until the end of the season, regardless of whether the side ends up relegated?

Sure enough, Adams looked overmatched on Saturday. His team had the best player on the pitch in the first half in Leroy Fer. For all their effort and bluster, Fulham’s players couldn’t near Fer when he was in possession; he eventually gassed during the second half before being substituted, after which point Norwich showed little creativity. (I paid him the ultimate compliment during the match by comparing him to Corey Brewer.) Much-ballyhooed acquisition Ricky van Wolfswinkel, signed for £8.8 million this summer after scoring freely in the Netherlands and Portugal, hasn’t scored since his debut with the club in August, and Adams wasn’t able to get more out of him against Fulham. Van Wolfswinkel missed an early sitter and seemed bereft of confidence in front of goal with half-chances later before being substituted for Gary Hooper, who was anonymous.

Fulham’s goal came somewhat against the run of play, but it’s no surprise that it came on a set piece; Steven Whittaker seemingly was of two minds in trying to defend and satisfied neither, Steve Sidwell was left open for an easy flick-on, and Rodallega was a step ahead of his marker in firing into the roof of the net. There’s no guarantee that Norwich would have stopped Fulham from scoring if Hughton was still around, but given that this was Fulham’s first goal all season from a free kick and that it came out with virtually no defense whatsoever, it certainly feels like a spot where superior coaching and execution came into play. Norwich was the better team before the goal but, perhaps deflated, they went into halftime and failed to make adjustments or improve. They would have lost 2-0 were it not for Ashkan Dejagah missing a gaping net in stoppage time.

Adams wasn’t able to get a goal out of his second-half substitutes, but on Sunday, Steve Bruce’s substitutions literally had his team’s supporters chanting his name. Hull was disappointing in the first half against third-tier Sheffield United, rightfully trailing 2-1 at halftime, but Bruce turned the game around with his substitutions. The former Manchester United star was without cup-tied strikers Nikica Jelavic and Shane Long, instead choosing to go with Yannick Sagbo up front, a move that Bruce admitted regretting. Although Sagbo came up with an out-of-nowhere goal just before halftime, Hull struggled to maintain possession in dangerous parts of the pitch and showed little ability to create space against what should have been inferior competition.

That all changed after halftime. Bruce subbed in forwards Sone Aluko and Matty Fryatt, and the little-used Fryatt changed the game. The former Leicester man scored four minutes after he came in on a scramble in the box, and then nearly added a second on a through ball from Aluko before being ruled narrowly offside. United’s defense began to stretch, and a few minutes later, Hull’s best player made the breakthrough, as Tom Huddlestone jinked past one defender and held a second off before firing into the top corner in a move The Guardian’s Jacob Steinberg rightly described as “like a slow-motion Steven Gerrard.”

Bruce then brought on Stephen Quinn in the 64th minute as a replacement for the injured Sagbo, and three minutes later, Hull broke the offside trap and Quinn headed home with his first touch. You get the feeling Bruce could have brought Lee Sharpe off the bench and gotten a goal if he just had another sub and a time machine to spare. A desperate United side found a goal in the 89th minute to keep things interesting, but a Hull counterattack produced the eighth and final goal of the match in stoppage time. That ensured a return trip to Wembley for the Tigers next month for the final against Arsenal, who were unimpressive in needing penalties to beat Wigan on Saturday.

Hull City couldn’t have had a much easier path to the final if they had booked it themselves. Sunday’s win over Sheffield, a midtable side in League One, was the latest in a series of Cup victories over lower-league competition. In addition to Sheffield, they’ve had to face two Championship teams (Brighton and Middlesbrough) and a League Two side (Southend United), while their lone match against Premiership competition en route to the final was against last-place Sunderland. Their counterparts in the final, Arsenal, had to beat three top-six Premier League clubs (Everton, Liverpool, and Spurs) just to make it to Wembley for the semifinal, where they beat Wigan in a penalty shootout. Even Wigan know all about the value of a good random draw: They won the competition last year while, like Hull City this year, playing just one Premier League team before the final.

Meanwhile, in the Premier League, there’s no escaping the league’s top sides, as Norwich is about to find out. Fulham was their last chance this campaign to pick up points against one of the league’s lesser lights; now, Norwich City will finish up their season with four matches against league giants Liverpool, Manchester United, Chelsea, and Arsenal. Fulham, now trailing Norwich — and safety — by just two points, face Tottenham on Saturday before finishing with midtable Hull, Stoke, and Crystal Palace. By the time the season ends, the club-defining difference between 17th and 18th place in the Premiership might very well be determined by Fulham’s win on Saturday. And that win could very well be chalked up to the difference between the two managers on display at Craven Cottage last weekend.

Filed Under: We Went there, English Premier League, Bill Barnwell