We Bought a Tank: Looking Back and Looking Forward with the Sixers 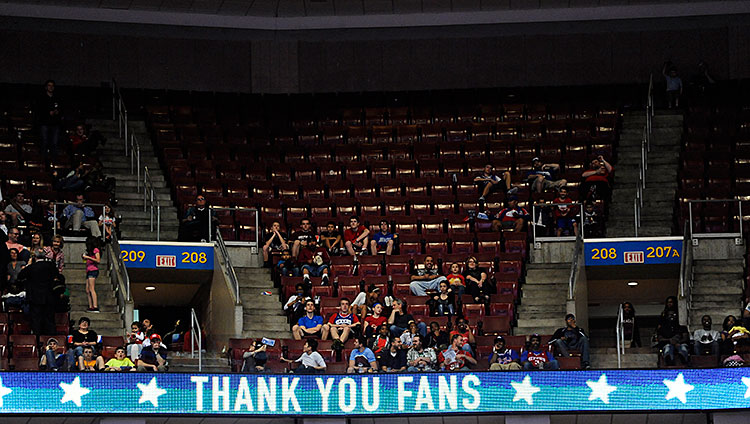 Something weird happened at the Celtics-Sixers game on Monday night in Philadelphia. I’m not talking about the Sixers winning — though that has become a rare enough occurrence during the 2013-14 season (some would say intentionally so) that that in itself could be called “weird.”

I’m not talking about the belly-jiggle-off between a kid whom I can only describe as “RIYL: TerRio” and the legendary Big Daddy.

And I’m not talking about the genuinely affecting, if blink-and-you-miss-it brief, moment when it was announced that the captain of the Sixers dance team, Lauren, would be leaving the franchise after six years. She trotted off the court after (I think) “Jump Around,” desperately trying to keep her mascara from running because of the tears. As her fellow dancers joined her in a group hug, they suffered from the same predicament.

Following the Sixers this season reminded me of being in college. Let me amend that: Following the Sixers reminded me of what I thought college was going to be like. In my more innocent years, I imagined an academic life full of spirited debates in packed seminars, with students pointing and shouting about the meaning and lasting relevance of Winesburg, Ohio, and whatever you said about the book said something about you.

Turns out college was not really like that. But being invested in the Sixers this season very much was. There were two camps. 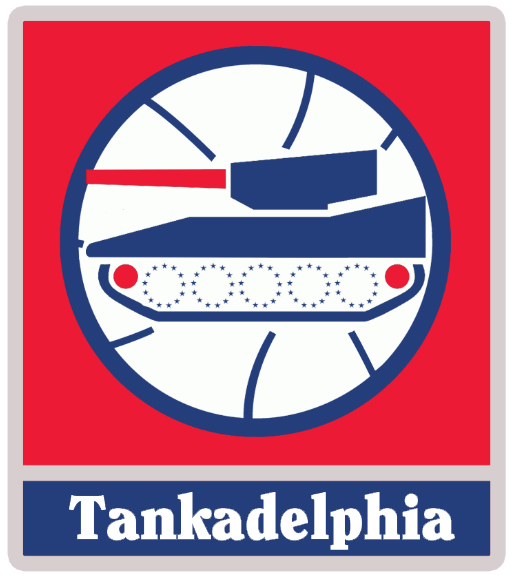 Sam Hinkie is the Sixers GM, and he has a plan. In his short stint in Philadelphia he has torn down the facade of a mediocre NBA franchise, shipping out the last vestiges of proven talent — Jrue Holiday, Evan Turner, Spencer Hawes — for a return haul of draft picks and cap flexibility. Hinkie drafted point guard Michael Carter-Williams (who probably out-performed expectations and may win Rookie of the Year this season), and traded for Nerlens Noel, a Kentucky big man who, perhaps in an act of over-cautiousness, spent the season on the sideline recuperating from a knee injury. For the rest of the Sixers roster, you could easily just play this clip from Major League.

If the Sixers were a plane, Sam Hinkie sent them up in the air as a flying gas tank with wings. No amenities, no in-flight movies. No solid veterans.

And then Brett Brown had them play like dogfighting F-16s.

The Sixers played at the league’s fastest pace this season, with the worst offensive efficiency. They forced the most turnovers and gave up the most. If that’s a little abstract for you, let me put it in concrete terms: A garden-variety Sixers play from the game against Boston on Monday would see Tony Wroten, an all-go, no-stop, conscience-free jackrabbit of a guard, getting the ball on one end of the court and taking off down to the other. He would see daylight, and the crowd would swell with excitement; he’d take off for the rim at some insane angle, with too many obstacles in front of him, at too fast a speed, and miss a layup. 1-2-3-4-5-Sixers.

For Team Tank, this is not a problem. For Team Tank, this is the solution. Brett Brown is instituting a style of play, and he and Hinkie were taking a risk-free gamble that, among the Wrotens and Thompsons and Varnados of this world, someone might turn out to be a valuable asset or future piece for the team. A staggering 28 different people wore Sixers uniforms at various points in the campaign. At least now Thad Young can say he once played with a dude named Casper.

The 2013-14 Sixers season was about anything but the ’13-’14 season. And it made for some tough viewing. Which brings us to the other school of Sixers fan.

Admittedly, Team Try is something of a straw man. They are not flooding the lines of Philly sports talk radio. You don’t see them boycotting outside Wells Fargo, demanding a refund on their season tickets. Intellectually, most Sixers fans understand what is happening with the franchise. They know enough about the NBA to know that — and I’m paraphrasing Jerry West here — it’s only after we’ve lost everything that we’re free to do anything.

Team Try sees how Oklahoma City was built. They know the only way to be a title-contending team in this league of stars is to get one yourself. And with Philly lagging in the free-agent destination power rankings, the way to do that is through the draft.

Intellectually, Team Try understands this. But that doesn’t mean it feels good.

Team Try looks into the future, and like Team Tank, they see the Thunder. But sometimes — sometimes — Team Try gets a little distracted by Toronto and Phoenix. The Raptors and Suns were two other franchises that were supposed to be part of tank-apalooza. They were also offloading veteran “talent” (Marcin Gortat, Rudy Gay), clearing the books, and collecting picks for this rich, incoming draft class.

And then those two teams found themselves becoming the most inspiring, exciting, and surprising success stories of the season.

In their heads, those on Team Try know this is fool’s gold. They know that they don’t give out trophies for being target practice for the Heat in the second round. But Team Try also remembers; they remember how it felt watching the 2011-12 team beat the Rose-less Bulls in the first round of the playoffs; they remember how it felt watching that same team push the Celtics in the next round. They know how it all ended. They know it eventually led to the sorry collapse of last season. But that doesn’t mean they don’t miss it sometimes.

And maybe Team Try has selective memories. Maybe they remember the Barkley and Iverson teams of their youth. Maybe those two players symbolize a romantic idea they have about Philadelphia as a city — a glorious, smack-you-in-the-mouth, obnoxious, heart-on-the-sleeve, gray, grimy, gorgeous town — and they miss it. Because — and this is especially true for Philly expats, I think — the identity of those teams, even the idea of those teams, helped form their own identity.

So, yeah, Wiggins. But, man, watching Philly lose by 43 is tough.

As you may or not be able to tell, I am a little conflicted over this Sixers season. So I decided to go home and watch them play on their floor one last time, to see if it gave me any clarity.

With all due respect to the obvious and well-documented charms of Malik Rose and Marc Zumoff, the Sixers, especially post–trade deadline, have been a tough watch on TV. Life is too short and Kevin Durant is too good to spend all your time watching Henry Sims learn to crawl. This is specific to the NBA, I think. You can drift away from your team now. Baseball is a months-long, religious experience (or so I’m told), and football is a one-day-a-week committment, where only the truly putrid teams are out of contention early on. The NBA is different. With League Pass, national games, and players that you want to be able to tell your kids about, it’s tough to stick with a bad team. And the Sixers are bad.

Live, you feel it. You feel how fast they are trying to play, you can see that Brett Brown has removed the restrictor plate on this team, you can see a bunch of guys desperately playing for their lives, or at least their livelihoods. If you just watch the game, and don’t look at the scoreboard, and don’t think about how Rajon Rondo must wonder what he did to deserve this … well, it’s kind of awesome.

Live, you notice that despite being 17-63 going into Monday’s game, the mood was pretty up during the shootaround. You can see the smiles on the players’ faces during introductions, as “Black Skinhead” boomed and flames burst in the air. When you see Henry Sims, Elliot Williams, Casper Ware, Brandon Davies, Hollis Thompson, and James Anderson, working their asses off, trying the most ridiculous post moves, initiating the most ill-advised breaks, attempting air-show disaster alley-oops, it takes on a charm of its own.

You also see that, regardless of what Team Tank is doing in the front office, Brett Brown is Team Try till he dies, screaming like a Pentecostal preacher on the sideline at all the lost causes and short-term rentals wearing the jersey. After the game, Brown reflected on it all, saying, “I actually think in a very twisted way that I’m going to look back at this year, and look back at guys who just played their tails off … They came in and there were no expectations and they played and developed and got NBA minutes. They looked at me and I looked at them and we incredibly survived a year like this.”

There was relief in the air at Wells Fargo on Monday. There were also moans, and boredom, and people checking their phones, and checking out on the action. But there was relief. It was like senior day; we did it. So long, farewell, bye-bye.

Briefly, this was an amusing if not well-played game in which the Sixers led by as many as 19, MCW played like a Rookie of the Year, and Rondo got nearly knocked out (unintentionally) by Thad Young. James Anderson tried some shit, and Tony Wroten almost made SportsCenter, and almost ended Kelly Olynyk’s life, with one of the craziest in-game dunk attempts I’ve ever seen live (he missed).

As the Celtics made a game of it, getting to within three with a few minutes remaining, that’s when I heard it. It was right after Thaddeus Young made a 3 to put the Sixers up five. It was the screaming; not like you usually hear at sporting events, higher-pitched, more delirious. I don’t know why it didn’t occur to me earlier: The arena was full of children.

There must have been a give-away to local schools. The average age of the crowd, just by eye test, was 13. And they were going absolutely batshit. Under oath, yeah, they might have been just as excited for the T-shirt cannon blasting cotton blend gifts at them as “Turn Down For What” broke their little ear drums. But damn it if they didn’t also lose their minds when that Thaddeus 3 went down.

That’s when I realized that the binary, Team Tank vs. Team Try, was kind of bullshit. Sure, it’s a fun parlor game, something to debate — is it better to be terrible to nab a chance at greatness than it is to be comfortably middle-class? But these kids, they don’t care about Iverson. They don’t care about Doc, or Barkley. They don’t care about Wiggins, either. They just care about screaming their brains out. But the thing is, someday soon, they will care. And if people like me have to watch teams like this to get to a point where those kids, five, six years from now, are screaming their hearts out at an Eastern Conference finals Game 7, then who knows? Maybe Sam Hinkie is for the children. Maybe this tanking thing isn’t so bad.

Why the West Is Fun: Are Division Winners Colorado and Anaheim Actually the Most Vulnerable?

Rounding Out the NBA Awards