Way to Curb Your Enthusiasm, Clippers 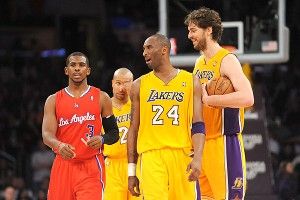 On Wednesday night, the Clippers and Lakers square off at Staples Center for their final regular-season matchup. Last time the two teams faced each other, Pau Gasol touched Chris Paul’s head, Chris Paul got mad, Pau Gasol was like, “Be easy, in Spain it is a sign of condescending affection,” Charles Oakley was like, “CAN U DIIIIIIIIIIIIG IT?!?!?!” and we were all entertained.

So it’s a little bit of a bummer to see the Clippers playing down the rematch, with the mood being very shruggy and “NBD” throughout the team.

Take Chris Paul’s comments, for instance: “We don’t make too much of it. First of all, it’s been so long ago that we played them. We’re two totally different teams. I don’t even remember that last game too much.” Oh yeah, Chris Paul, you totally haven’t checked to see if the Lakers changed their relationship status.

With the Clippers getting all Memento on us, let’s take a trip down YouTube lane and review some really harmonious interactions between the two L.A. squads:

A quiet conversation from last January between Griffin, Lamar Odom, and the then-named Ron Artest …

Jokes. We are doing the Birdman hand rub in anticipation.

Let's All Get Excited About the Marlins' Home Run Geyser