USMNT ‘B’ Team Looks to Impress Klinsmann at Gold Cup 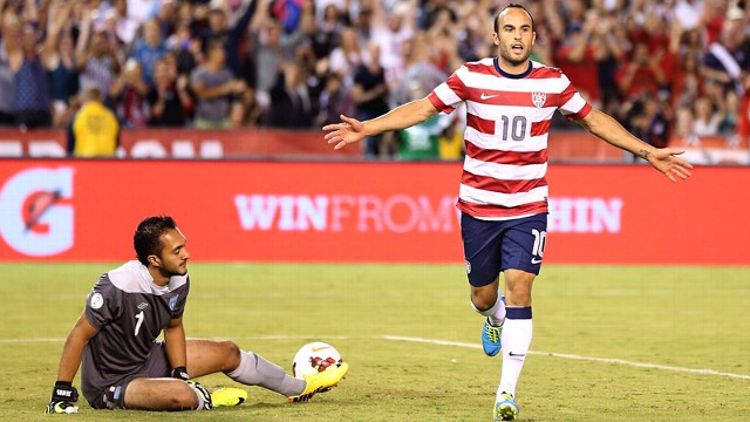 The CONCACAF Gold Cup is a silly tournament with a rather goofy name. It serves as the regional championship, which means a bunch of teams play a bunch of games, then the United States and Mexico meet in the finals. The structure of the tournament, which started Sunday when tiny Martinique defeated Canada, 1-0, courtesy of 37-year-old Fabrice Reuperne, and Mexico lost to Panama, encourages this outcome and makes it nearly impossible for the two archrivals to play until the last match. In 2007, the Americans prevailed, a victory that earned the squad a trip to the 2009 Confederations Cup. Two years later, Mexico’s “B” team thrashed the Stars and Stripes, 5-0, a result that helped a reeling El Tri get their groove back when playing in the U.S. In 2011, Bob Bradley’s team went up two quick goals, then conceded four and lost. The coach lost his job, opening the spot now occupied by Mr. Jurgen Klinsmann.

The German by way of California wants to win this thing. That’s partially because he wants to win everything, as he’s desperate to instill a sense of urgency that he finds lacking in United States soccer. All players should feel pushed and that their places can disappear instantly. But it’s also important because the tournament means something, as the winner will play the 2015 Gold Cup champion for a place in the 2017 Confederations Cup. Previously, the winner of the Gold Cup in the year after the World Cup automatically qualified for the Confed. Given that one of the Gold Cup’s primary functions is to fund CONCACAF, it makes sense that the powers that be want to add another lucrative game pitting the two champions — likely the U.S. and Mexico — against each other.

But despite the coach’s rhetoric, winning is secondary to talent evaluation. Klinsmann filled his roster with players on the margins. While the pre-tournament talk focused on the younger generation — especially Philadelphia Union forward Jack McInerney, Club Tijuana’s Joe Corona, and Rosenborg’s Mix Diskerud — the real story is the older guard. In November 1999, a United States team that included Landon Donovan, DaMarcus Beasley, Kyle Beckerman, and Oguchi Onyewu reached the semifinal of the U-17 World Cup in New Zealand, a result that hasn’t been matched since.

In June 2013, the foursome finds itself on the wrong side of 30 and — with the exception of Beasley — on the outside looking in when it comes to the 23 spots on next summer’s World Cup roster. The 2013 Gold Cup represents the best chance for the aging stars to impress Klinsmann and get closer to getting on that plane.

The road began during a friendly against Guatemala on Friday night. The U.S. manager went with experience, tapping 29-year-old Michael Parkhurst and seven starters older than 30. The biggest name, because he’s always the biggest name, was Donovan. The all-time leading scorer returned from his sabbatical, donning the red, white, and blue for the first time in 324 days in an attempt to reclaim his place … somewhere. Donovan continues to round into form with the Los Angeles Galaxy and was inconsistent against Guatemala, but he managed to pick up career international goals nos. 50 and 51 in the 6-0 thrashing.

While Donovan’s solid performance against an overmatched squad didn’t punch his ticket to Brazil, it certainly helped clear the way. Any ill will lingering from his decision to remove himself from the squad for almost a year is gone, at least if the words of the player and the coach are to be believed. And there’s no reason to think they shouldn’t be. Assuming Donovan continues to shake off the rust, there’s a place for him.

The question, of course, is where exactly that spot is. The U.S. found success in recent World Cup qualifiers with Graham Zusi and Fabian Johnson playing the wing midfield roles while Clint Dempsey held down the second striker spot. Of those three, Zusi is the most likely to give way to the Balding One, but the Sporting Kansas City star’s crosses were essential in the scoring streak of Jozy Altidore and the general rejuvenation of the American attack. Donovan, for all his talents, isn’t the type of player to deliver those balls; he’d rather cut into the middle than stay wide. So here’s an idea: Start him on the bench in Brazil. At the World Cup in 2010, Bradley brought on players like Benny Feilhaber, Maurice Edu, Edson Buddle, and a working-his-way-back Stuart Holden in an effort to find some late-match offense. All fine players, but none compare to the injection of style and substance that Donovan would provide if/when he came on in the 65th minute. Supersub might be a nice cap on the Californian’s stellar international career, especially if he could play hero again.

While it’s unlikely we’ll see Donovan outside the starting lineup during the Gold Cup — Klinsmann said the team that took the field at the opening whistle against Guatemala will likely do so against Belize in the team’s opener in Portland tonight — it was two second-half insertions that changed Friday’s friendly. Holden and Diskerud replaced the underwhelming central midfield duo of Beckerman and Jose Torres, and the two immediately increased the pressure, the pace, and the creativity. Neither man is new to the American program, but both have missed recent camps, one because of injury and the other because of Klinsmann’s decision. The middle of the field is crowded with talent, but Holden and Diskerud have game-changing vision. If they can show their manager a commitment to defense, they can make a serious case for inclusion in the “A” team when it takes the field again in September for two more 2014 qualifiers.

But the Gold Cup is the task now at hand. The Americans should easily defeat Belize, although Ruperto Vicente, president of the Belize football federation, awesomely wants an upset. “I call on our national team to not only beat the United States but to humiliate the United States. It is your responsibility. It is your task,” he said recently. Yeah, that’s not going to happen for the nation of 350,000 people. The second U.S. game is against Cuba, a squad known more for its players defecting during Gold Cups than winning anything. Costa Rica, the Stars and Stripes’ third opponent, could present a more difficult challenge, but Klinsmann’s crew should win Group C easily. Then it’s on to the knockout round and, assuming El Tri rights their listing ship, a meeting with Mexico at Soldier Field on July 28. Klinsmann will watch the team carefully; what he learns about his second string could be worth more than gold.