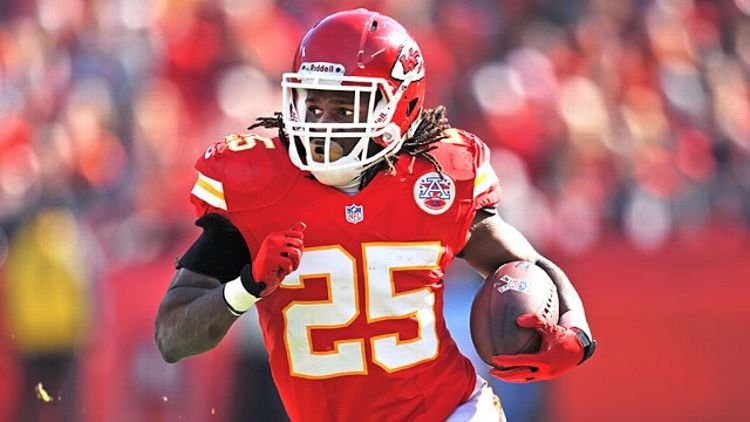 Today, our requisite Chiefs excitement comes fully stocked with a sit-down between Jamaal Charles and me, during which we discuss his underrated career stats, the Arrowhead experience, and the outlook for Andy Reid at the helm of the 2013 Chiefs.

In some ways, last year’s Chiefs were like a lot of NFL teams that hit bottom. A 2-14 season cost the team’s head coach (Romeo Crennel), general manager (Scott Pioli), and quarterback(s) (the amalgam of awful that was Brady Quinn and Matt Cassel) their jobs. That’s about where the similarities between Kansas City and the typically terrible end, though.

Replacing Crennel isn’t an upstart assistant finally catching his first break — it’s Andy Reid, who took the Eagles to the playoffs in nine of his 14 seasons in Philadelphia. In to play quarterback is Alex Smith, who despite a tumultuous start to his career is at least a known NFL commodity. But it’s the rest of the roster that actually sets the Chiefs apart from most teams that end up with the no. 1 overall pick. Kansas City sent five players to the Pro Bowl last season, and although Pro Bowl trips aren’t the best indicator of value (far from it), this team is undeniably talented.

The main concentration of that talent remains on the defensive side of the ball. Tamba Hali has been one of the league’s top pass-rushers for years, but last season, second-year outside linebacker Justin Houston joined him among the NFL’s best. Houston has noted that working alongside Hali has accelerated his learning process as a pass-rusher, and considering the development of most rushers, there’s reason to believe he’ll be even better in Year 3. On the inside in Kansas City’s linebacking corps is Derrick Johnson, who remains consistently great and consistently overlooked. Over the past few seasons, Johnson may belong at the top of the non–Patrick Willis list of players at the position. On the back end, Brandon Flowers continued his run as one of the league’s better corners, and although Eric Berry’s name and draft status still outweigh his production, he’s an undeniably talented 24-year-old safety.

The options at the other corner and safety spots are both underwhelming — Miami didn’t seem too broken up about trading out Sean Smith for Brent Grimes — and although 2012 first-round pick Dontari Poe deserves more time to develop at the nose, the remainder of the Chiefs’ front is made up of known, ordinary commodities. Still, there remains a core of talent on that side of the ball that should far exceed what we saw a year ago.

It’s on the other side where a leap forward should ultimately make the difference, and that leap starts where most NFL success does — with the quarterback and head coach. Last year, Matt Cassel and Brady Quinn finished 36th and 38th, respectively, in quarterback DVOA. If you’ll recall, there are only 32 teams in the NFL. Alex Smith was 10th. Smith is not Tom Brady — he isn’t even Colin Kaepernick — but going from wholly inept to mildly competent at quarterback can make all the difference for an offense, and Smith is nothing if not mildly competent.

That competence should be ensured with Reid guiding the offense. Smith and his mistake-avoiding ways should mesh well with his new coach’s quick-hit approach, and his brain and skill set should allow it to happen quickly. The talent surrounding Smith is the reason someone might wonder what this offense could look like with decent quarterback play. Jamaal Charles, as we discuss in the video above, has averaged more yards per carry than any player ever (Jim Brown is second). Adrian Peterson, rightfully, was lauded for the season he put together coming off an ACL tear, but Charles had a remarkable comeback of his own — 1,509 yards on just 285 carries. Charles has made the most of his carries his entire stay in Kansas City, even as Thomas Jones inexplicably poached them near the goal line. In his career, Charles has never carried the ball at least 20 times without exceeding 100 yards. Give the man his touches, and good things happen. Reid has never been known to put a big workload on a running back (LeSean McCoy’s career high in carries is 273), but it’s likely that Charles will have the ball at least as much as he did last season. Charles’s 48 targets in the passing game last season were eight fewer than McCoy has gotten in any season of his career.

Outside of Smith, the most significant change comes along the offensive line. Before the draft, new general manager John Dorsey made it clear he wanted the best player available, regardless of position. With Branden Albert and Eric Winston, Kansas City had two above-average tackles already in place, but that didn’t stop Dorsey from taking Central Michigan product Eric Fisher with the no. 1 overall pick and cutting Winston loose. Albert received the franchise tag this offseason, and Kansas City is working to figure out a long-term extension before the July 15 deadline. If that does happen, there’s a good chance Albert remains the team’s left tackle and Fisher spends the early part of his career on the right. Five years ago, drafting a right tackle with the first overall pick would be unthinkable, but in the current makeup of NFL offenses there’s less distinction between right and left tackle than there has been in some time. Teams need a great pass protector on either side, and with Fisher, Kansas City seems to feel like it does.

There’s more uncertainty among the interior parts of the line. Right guard Jon Asamoah is a former third-round pick who’s turned into a very good player, but Rodney Hudson will be a new face at center, replacing retired AFC fixture Ryan Lilja. At left guard, Kansas City has options. Jeff and Geoff — Allen and Schwartz — will spend training camp fighting for the spot. Allen is apparently the favorite, but Schwartz said prior to free agency that he wasn’t interested in leaving Minnesota — where he played well in limited action last year — to be a backup elsewhere. I’d be surprised if he didn’t get a shot, and the Chiefs would be better for it.

Questions remain about who will emerge as the team’s no. 2 receiver (former first-round pick Jonathan Baldwin is running out of time, and Donnie Avery is Donnie Avery), but the guy who’s shown the most enthusiasm for the new regime in Kansas City has been Dwayne Bowe. Bowe got a bit overexcited during some offseason workouts, claiming that in this offense, he’ll lead the league in catches and touchdowns. It’s a proclamation Bowe was scolded for, but it’s easy to understand his excitement. Even in Reid’s equal-opportunity offense, no player stands to gain as much from Smith’s presence as Bowe. Especially when you consider that part of the reason the targets were spread out among Reid’s Eagles is that Philadelphia lacked a defined no. 1 receiver for much of his tenure. Carrying Terrell Owens’s per-game average over a 16-game season, he would have had 88 catches for the Eagles in 2004. That’s two more than Bowe has had in any season of his career. Bowe may not lead the league in catches and touchdowns, but he’s better off for having Reid and Smith in town. The whole organization is. With the talent it has in place, the wide-open AFC, and the jolt brought on by a new coach and quarterback, Kansas City could very well be back at .500 and on the brink of the playoffs.

USMNT 'B' Team Looks to Impress Klinsmann at Gold Cup