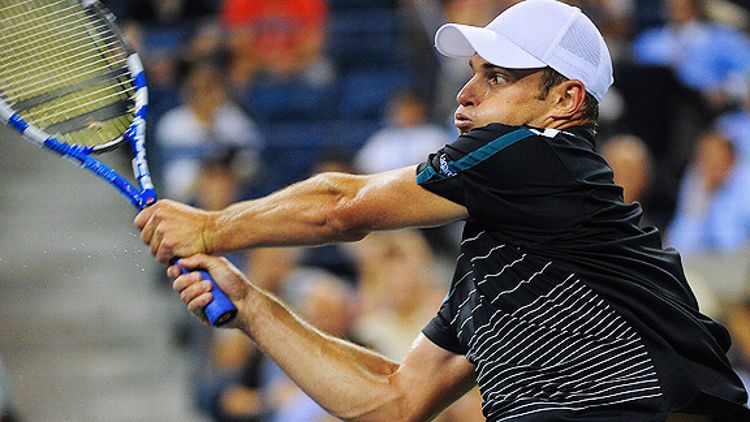 There is nothing quite like watching Andy Roddick speak to the press. The hair on your arms stands at rapt attention, you begin to lean forward in your seat, and your face slowly curls into a half-smile, half-grimace — the universal expression for ohmygodwhatamiwatching. What a jerk! you think. And then: But he’s got a point!

Having waited out Hurricane Irene in North Carolina following last week’s Winston-Salem Open, a tournament in which he was upset in the semis by fellow American John Isner, Roddick didn’t play his first U.S. Open match until Wednesday night. (By the time he took the court, many of the women had already played twice.) But he wasted no time in going Full Roddick.

In a post-match studio interview with ESPN’s Chris Fowler following a 6-2, 6-4, 4-6, 7-5 win over Michael Russell, Roddick had some strong words for tennis analysts. The job is the “easiest in the world” and “just doesn’t take much thought,” he said. “So, you know, I’m pretty convinced that I could be a tennis analyst one day.”

The whole exchange was painful, awkward, and not exactly wrong. (Fowler, accustomed as he is to covering prickly college football coaches, later tweeted that he “LOVED” the interview.) Indeed, if there’s anyone who glowers at and sasses the media like a Mike Gundy or a Nick Saban, it’s Roddick: For years he has answered questions with questions, called out the press corps for rephrasing the same thing umpteen different ways, and in the process earned himself a reputation as a whiner, a sore loser/winner — and one of the more searingly honest guys in sports.

In a later, broader press conference, Roddick retained his edge but opened up. The result was as good a case as any for why, his sarcasm aside, he actually might be pretty wonderful as an analyst someday. On the Williams sisters: “In five years, when they’re gone, everyone is going to miss them. Everyone is going to realize they’re going to be living legends for the rest of their lives. Two girls from Compton dominating tennis, that’s not an everyday story.” On 18-year-old Jack Sock, his opponent in the second round: “I think we’re the only two teenagers to play tennis in Nebraska in the last 30 years and we’re both in the U.S. Open … Maybe we need the corn-fed boys.” On whether tennis players should be penalized for doing things like throwing rackets: “There’s a reason that Monday Night Raw gets better ratings than we do … Let’s put it this way: McEnroe is still getting endorsements and he’s 87 years old, so, I mean, what does that tell you?”

What chafes about Roddick, though, what makes his statements come across more raw than rollicking, is his underlying bitterness, which makes him seem at once both older and younger than he really is. We know he hasn’t won a Grand Slam save for the 2003 U.S. Open, and he knows we know, and hates it. And so when he says, of guys like Sock and Ryan Harrison: “You know, it’s fun to watch the kids, I mentioned before, when it’s all there, it’s all ahead of them, they have this incredible journey ahead of them … nothing to lose and everything to gain,” well, it’s hard not to feel a little twinge of empathy for the guy. Who among us can’t, in our own way, relate?

Ah, the youngs. As Jon Wertheim wrote today, preemptively anointing the kids is a cherished Flushing Meadows tradition: “A young American does well in the first week of the U.S. Open and suddenly we’ve minted the Next Big Star.” While Ryan Harrison was knocked off early, a number of emerging players have had strong first and/or second rounds this week.

The aforementioned Jack Sock, an 18-year-old who last year rode an 18-day diet of Chipotle to the U.S. Open Boys’ Singles title, staved off a match that could have gone to five sets today. If you want to feel a little old, here’s what Jack looked like two years after Roddick won the U.S. Open. And 19-year-old Christina McHale, who earlier this summer bested world No. 1 Caroline Wozniacki, defeated my girl No. 8 Marion Bartoli (sob!) 7-6 (2), 6-2 on Wednesday: “She just came out and I think played a perfect match,” Bartoli said.

Irina Falconi, 21, earned her second upset of the tournament as well, knocking off No. 14 Dominika Cibulkova in a 2-6, 6-3, 7-5 comeback before draping herself excitedly in an American flag. (Her match was moved to Arthur Ashe Stadium after Venus Williams unexpectedly withdrew with an autoimmune illness.) Madison Keys, who at 16 is the youngest and lowest-ranked player in the draw, grabbed the first set from No. 27 Lucie Safarova and came tantalizingly close to the win, ultimately falling in three sets, 3-6, 7-5, 6-4.

And on Tuesday, 18-year-old Sloane Stephens was the one to shine, winning a third-set tiebreaker over Hungary’s Reka-Luca Jani for the 2-6, 6-3, 7-6 (3) victory, her first in a Grand Slam. (This infectious interview will remind you of just how young she is at heart: “In kindergarten I sang ‘Peanut Butter Jelly’ in a talent show and I was amazing. My grandparents reminded me of that. But everyone says I can’t sing, and it kinda hurts my feeling sometimes, but I‘ve learned to block them out.”)

In other early-round news: Today’s action is rich with seeded players: on the men’s side, Roger Federer, Novak Djokovic, Mardy Fish, Richard Gasquet, Jo-Wilfried Tsonga, Tomas Berdych, and Juan Carlos Ferrero. (The match between unseeded Tommy Haas and Alejandro Falla has the makings of a good one, too.) On the women’s side, Wozniacki, Francesca Schiavone, Jelena Jankovic, Victoria Azarenka, and Svetlana Kuznetsova are on the docket. I’m most excited for Sloane Stephens to play her sometime practice pal, No. 23 Shahar Peer.

But some of the coolest action might be on the doubles court, where you can find mixed doubles youth movements like Melanie Oudin/Jack Sock and Irina Falconi/Steve Johnson. Sadly, these will likely not be televised, but hey — I told you to go to the Open! Just try to stay out of Andy Roddick’s warpath, lest he mistake you for a tennis writer.

Don't Worry, Ohio State's Got This