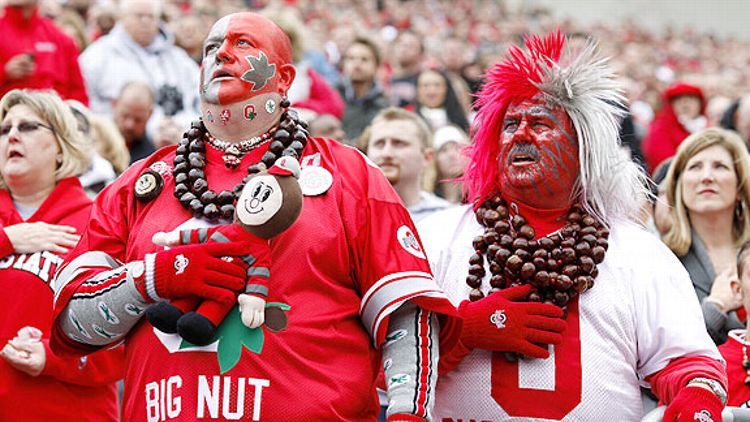 It’s no secret that pro teams in Ohio have historically had the same amount of success as Antonio Cromartie’s condoms. Sure, Cleveland gets all the publicity and sympathy because of things like The Drive, the Browns’ move to Baltimore, the 1997 World Series, and LeBron fleeing to Miami so he could fulfill his lifelong dream of finishing in second place with his friends. But Cincinnati’s pro teams aren’t exactly all that great either, as evidenced by the fact that — with the exception of winning the division last year and getting promptly swept from the playoffs — the Reds haven’t done much of anything for 15 years, and the Bengals have never won a title and appear as though they’ll be in serious contention all season to land Andrew Luck in next year’s draft. Throw in the Columbus Blue Jackets’ irrelevance for their first 11 years of existence and there’s no denying that the collective pro sports scene in Ohio is shoddy at best and shitty at worst.

This is where Ohio State football comes in. It’s a big reason why the people of Ohio love their Buckeyes so much. When every other team in the state either sucks to begin with or chokes in the playoffs, Ohioans know at least they’ve always got Buckeyes football to fall back on. Really, being a sports fan in Ohio is like being lost at sea with nothing but a worn-out life jacket and the overwhelming feeling that you’re not going to make it out alive. And just when you think you should just give up and let yourself drown, a lifeboat comes along to save the day in the form of Ohio State football. Only it’s better than an average lifeboat because — surprise! — it’s actually a party yacht full of hookers and blow. After being surrounded by nothing but water and despair for so long, you’re now suddenly surrounded by luxury and a bounty of women who are ready to party. In other words, in a state where pro sports teams are a perpetual letdown, the beginning of the college football season all but guarantees the people of Ohio a chance to cheer on a contender.

That is, until now.

Thanks to a few free and/or discounted tattoos, a handful of secretive e-mails, and one jackass former walk-on basketball player throwing his alma mater under the bus, there’s currently a lot of uncertainty surrounding Ohio State football. What has always been a solid foundation is suddenly completely unstable and unpredictable, which is enough to make a large chunk of Ohio State fans pessimistic and all but give up on this upcoming season. And rightfully so. After all, we’ve got a new coach, a new quarterback, and some of our best players are suspended for the first five games.

Perhaps the biggest reason why I’m so optimistic is because I have no doubt in my mind that Luke Fickell will be successful, if only because he’s a stone-cold badass. For those who don’t know, Fickell was a three-time state champion wrestler in high school who went on to play nose tackle at Ohio State. A torn ACL cut short his NFL career. What does this have to do with coaching football, you ask? Good question. Well, Fickell was an accomplished amateur wrestler who had a brief stint in the NFL as a defensive lineman. If that bio sounds familiar, it’s probably because a guy by the name of Brock Lesnar did the exact same thing. So, by the transitive property of equality, Luke Fickell is essentially a former WWE and UFC Heavyweight Champion. In other words, while Woody Hayes simply threw a singular punch at an opposing player who ended up by Ohio State’s bench, there’s a good chance that any opposing player who finds himself near Ohio State’s bench this season will end up leaving on a stretcher courtesy of a triple powerbomb and forceful F5 from Luke F’ing Fickell. That’s surely got to strike some sort of fear into Ohio State’s opponents, right?

The other big concern for most Ohio State fans is trying to fill the void left at quarterback by Terrelle Pryor and his Wonderlic score of 7. As of right now, redshirt senior Joe Bauserman has been named the starting quarterback in favor of true freshman and highly touted recruit Braxton Miller. It’s a decision that a lot of Buckeye fans are less than thrilled about. However, I’m fully supporting it. I’m giving Fickell the benefit of the doubt, since I haven’t really seen either guy play and trying to choose one over the other at this point would be like trying to pick my favorite Tyler Perry movie.

Nonetheless, I’m confident in Bauserman if for no other reason than he’s almost 26. To put the age gap between Bauserman and 18-year-old Miller into perspective, consider this: There’s a good chance that neither one of them watched Rocko’s Modern Life when they were younger because Bauserman was probably too old to like cartoons when the show first aired and Miller was only about 3 when its run ended. In that regard, they’re generations apart, really.

The bottom line is that Bauserman graduated from high school before Miller even started puberty. When you think about it that way, it’s a no-brainer — of course I’d rather have a guy who is All-State in two sports quarterbacking my team than a kid who doesn’t even have armpit hair yet. Plus, Ohio State has never lost a single game in which Joe Bauserman has played, and that is a fact. That alone is why I’m not only OK with Bauserman getting the nod over Miller, but I’m also confident that he’ll do just fine this season. The guy is simply a natural-born winner.

Finally, there’s the issue of a handful of players being suspended for the first five games, which really isn’t even that big of a deal since only two of those games are against formidable opponents anyway. Sure, it’s going to be tough to integrate the suspended players back into the thick of things right before having to travel to Lincoln to play at Nebraska in their first game back, but my research is showing that included in the group of suspended players are our best running back, our best wide receiver, and our best offensive linemen, which means … wait — We won’t have our best running back, receiver, or lineman for the first five games? We have to play Miami and Michigan State without those guys? Um … yeah, that’s no big deal. I’m sure we’ll be fine. We got this.

In conclusion, Brock Lesnar is our coach, Chris Weinke is our quarterback, and three of our best players are suspended for almost half of the season. I guess maybe I shouldn’t be as confident as I am, but I’ve still got high hopes for this year’s team because I know that they’re still really talented and I know that every single time they step on the field they’re going to play their balls off. And I also know that no matter how well the football team plays this year, I’ll still be proud to be a Buckeye. Because despite all the adversity surrounding the team this season, I can take solace in knowing that I am absolutely certain of at least this much — Michigan still sucks.