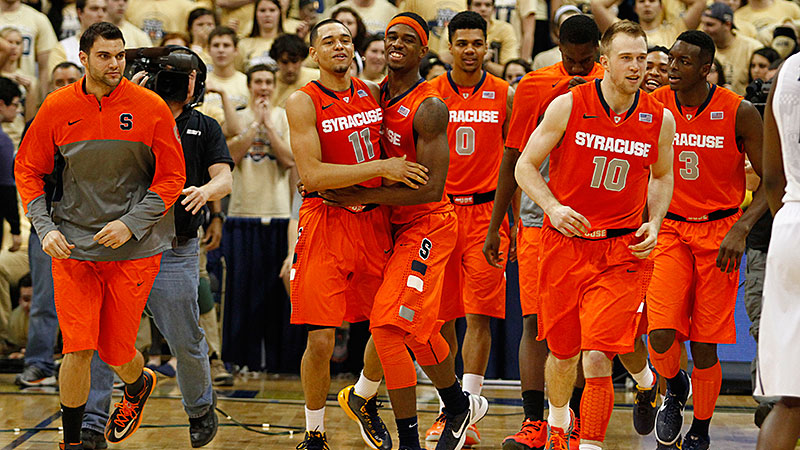 Tyler Ennis is the coolest man in college basketball. He’s cool even by cool standards. A bunch of really cool cucumbers once saw Tyler Ennis, realized they were lukewarm at best by comparison, and committed mass suicide by jumping sideways into a Hutzler 571 Banana Slicer. Several other-sides-of-pillows have spontaneously burst into flames when Tyler Ennis walks into a room. (He has to wear a helmet when he sleeps.) Formerly cool customers are now sweaty and gross because he exists. You can’t go into a department store without being disgusted.

All season, the freshman point guard has been keeping things calm while Syracuse plays crazy games. The Orange are now 24-0, and despite great talent, great coaching, and a zone defense that’s particularly valuable in the new era of fouls actually being called, they should not be undefeated. They should be no. 1,  sure. But perfect? No way. And yet, every time things look dicey, there’s Ennis with his neutral expression, his unwavering confidence, and his ability to slow everything down and exploit each narrow sliver of opportunity.

Last night, though, when Syracuse traveled to Pittsburgh, he took it to the next level. Last night Syracuse was finally going to lose. And then, with 4.4 seconds …

If you haven’t seen yet, I won’t spoil it. Watch the video of the entire endgame below, and let’s go moment by moment, time-stamp-style, to celebrate his greatness, and, yes, revel in schadenfreude as the Orange Cooler visits his awful silence on an entire arena.

0:00-0:05: Talib Zanna hits a free throw to tie the game, and everyone in the stands goes crazy. Let’s be honest with each other: Dramatic shots are really fun, live, but it’s almost more fun to watch them after, just to see the fan reaction. And it’s even better when it’s on the road. (Since Duke-UNC was postponed due to snow yesterday, I can’t resist linking this classic example.)

0:06-0:08: Boeheim nose scratch! Pick, maybe?! I’m pretty sure it was just a scratch! Really trying not to make an obvious Seinfeld reference here!

0:23-0:41: Syracuse has no timeouts left, the crowd is absolutely insatiable, and even with the referees giving them extra time by holding the ball and calming down the Pittsburgh bench, the Orange look scattered. So what does Jamie Dixon do? Timeout. I’m convinced college basketball teams get so many timeouts that it becomes impossible for coaches to resist the urge to use them in any and every situation. I guess Dixon wanted to tell his players not to foul, or something, but to silence the crowd, nullify the home floor advantage, and give Jim Boeheim a chance to design something is so, so stupid. Dumbest timeout of the year? It’s gotta be in the running.

0:54: “Jamie Dixon, after seeing the setup, wanted to make sure his guys were on point defensively,” says Doris Burke. Here’s how you do that: Jump up and down and scream “DON’T FOUL!” That’s it. Done.

0:56-1:10: Here we have a shot of the Syracuse bench. Just watch Tyler Ennis’s face. Watch how little pressure he seems to be feeling. It’s incredible. He even does a Boeheimian nose scratch at 1:07, a classic tribute.

1:13: Crowd sign: “CUSE YOU CAN’T HANDLE THIS DIXsON.” If you have any idea what this means, please let me know in the comments. I mean, I get that it’s a reference to a penis. I do. I get that, everyone. But why is the “s” small? What would “dicks on” refer to? Or “dicks son”? Is this referring to the son of a man named Richard? Is it not a sexual thing at all?

1:14: Another crowd sign: “THIS IS OUR HOUSE” on cardboard. I enjoy signs. I really do. But if you’re going to put forth the effort to design one of these, and you begin brainstorming, and an hour later the best thing you’ve come up with is, “THIS IS OUR HOUSE,” you should probably just forget the whole thing. Just head to the game and enjoy it without a sign. At least write something like “DIXsON” to confuse people.

1:15: Most of the students are jumping around and happy, but notice the kid in glasses on the lower-right part of the screen who has his hands on his head and looks absolutely devastated? Somebody find this person, because he is from 45 seconds into the future.

1:23-1:28: The girl in the headband starts out in a celebratory mood like her friends, and then gradually BECOMES VERY ANGRY AT THE CAMERA. Moments after the shot cut away, she smashed the lens.

1:32: Doris Burke describes exactly what is about to happen vis-à-vis Ennis.

1:56: Shots of the Pitt bench as they half listen to Jamie Dixon. “Don’t foul,” he probably says, as Jim Boeheim giddily draws up a game-winning play.

2:02-2:04: Classic look of overconfidence from Pitt’s Zanna on the bench. The cocky grin, the self-assured clap, the smug look-around. These are the moments that make the replay so wonderful.

2:06: The Orange Cooler is still giving instructions to his team. Ennis is king.

2:33: Ennis gets the ball below the wrong foul line. Great start for Pitt.

2:34-2:36: A double team comes near half court, but Josh Newkirk, the original defender, cheats to the center of the court. Gotta guard the sideline, amigo. Didn’t your coach tell you that in the timeout? A simple crossover frees Ennis down the sideline, all but ensuring he’s about to get an open look.

2:36: The sound of the fans has reached that hysterical “Oh shit, please don’t let this go in” pitch. It’s high, it’s gaspy, it’s dead anxious. They know they’re milliseconds from a result. Just one more shot to survive …

2:46-2:49: Syracuse celebrates by the Pitt students, leading to angry yelling and several middle fingers from the latter group. The best.

2:59: Dixon hunched over. Some say he never stood up straight again, after that day. Some say.

3:01-3:23: Our first two slo-mo replays. The Pitt students go from bouncing up and down to dead-still, hands-on-head disbelief, with impressive speed.

3:30: “Pittsburgh fans behind us, walking away saying, ‘Are you kidding me?’ They’re going to be saying that all night.” That’s Dave O’Brien, who, ESPN homerism aside, absolutely kills it at every step of the way. But his best moment is about to come …

3:56: Boeheim facial scratch into chin scratch. Somewhere, a producer desperately tries to cut away before the inevitable nose scratch/pick. And in the race with Boeheim, the producer wins … this time.

4:07: Classic college basketball moment here: The ball was out of Ennis’s hand with over a second remaining, it couldn’t be more obvious that the shot counts, and yet it takes approximately six hours to decide for sure. Actually, I should just shut up and be grateful they didn’t wave it off. You laugh, but there was about a 40 percent chance of that happening. And if Karl Hess was in the building? Up it to 86 percent.

4:18-4:22: They finally call the shot good. But in the background, one guy in a blue button-down shirt still waving it off. This is the saddest Pittsburgh fan.

4:22: Boeheim PANIC! Only for two seconds, though, as a brief wave of confusion runs through the crowd and the Pitt fans briefly think it’s no good. At this point, life must feel aggressively cruel.

4:26: Jamie Dixon blow-by handshake. Where have we seen that before?

4:28-4:40: Ennis not doing a great job hiding his shit-eating grin in the handshake line.

5:13: Boeheim. Waiting … waiting … AND OH MY GOD WE’VE FINALLY SEEN WHAT IT TAKES FOR BOEHEIM TO DISPLAY AN EMOTION OTHER THAN PESSIMISM, SARCASM, OR OPEN DISDAIN!

5:20: The Orange Cooler takes the walk of glory into the locker room. Cool as can be.

Two minutes of interviews and replays follow, but we’ll leave it there with that final image of Ennis departing, cool as ever, with thousands of broken hearts in his wake.