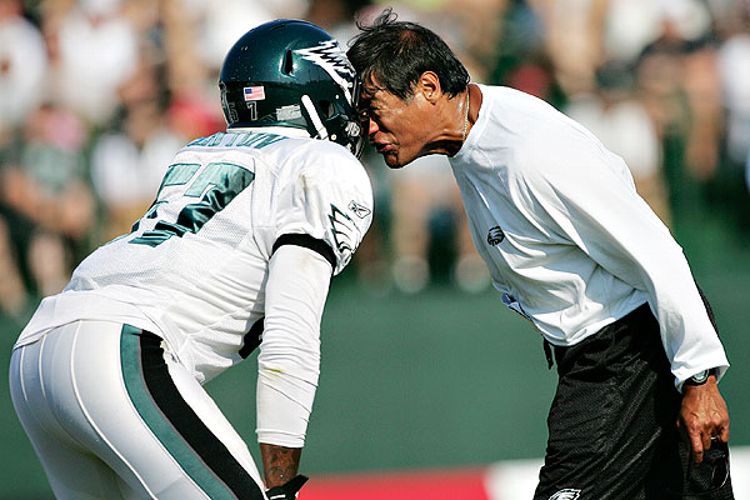 Cool story: Today I went to get a physical because I am very into reading Men’s Journal and sitting in waiting rooms and I also want to live to be 150. Anyway, more about my day: I got an EKG and the doctor was like, “Damn, son, your heart is not beating!” And I was like, “Let me check Twitter and see if something happened in Philly sports to cause that.” And lo and behold, my smartphone hummed with the straight stupid news that the Philadelphia Eagles were bringing Juan Castillo back as defensive coordinator.

On the day God arrived at the office to create Earth, he found Juan Castillo in the parking lot waiting for him. You cannot beat Juan Castillo to work. I’m not trying to be a dick, that’s actually how he was pitched to Eagles fans at the beginning of this season, when the then-offensive line coach was made defensive coordinator. “It’s a tribute to the hard work, the diligence and the kind of football coach he is,” Andy Reid said upon Castillo’s hiring.

His jump to defensive coordinator prompted a shocked Asante Samuel to blurt, “The offensive line coach?” and illicited reactions like this from fans all over the Delaware Valley:

What followed was a season that Eagles fans won’t soon forget without the aid of electroshock therapy; visions of linebackers missing tackles, Pro Bowl cornerbacks being used as safeties, and Marshawn Lynch running over, around, and through a half dozen hapless Eagles defenders at a time.

Was this all Castillo’s fault? No. Is he basically in the same boat as his predecessor, Sean McDermott, in so much as he will never be good enough because of the simple fact that he is not the late Jim Johnson (one of the more beloved coaching figures in recent Philadelphia sports history)? Yes. Was it his fault that the Eagles defense was heavy on big names but lacking in depth and fundamentally sound soldiers? Maybe not.

Really, the problem facing the Eagles is the same one facing the franchise for the last five years and, truthfully, for the majority of Reid’s reign. The team is always within touching distance of another Super Bowl appearance and, possibly, its first Lombardi Trophy. They are always one game-breaking wide receiver, stud running back, or Brian Dawkins replacement away. Eagles fans are used to coming up just short.

What they’re not used to — and what was so galling about this past season &@8212; was that this was the first time in recent memory that the team looked poorly coached and underprepared. Say what you will about his clock management, Reid’s teams usually seem to know what they’re doing. Not this season, especially not on defense. A few wins toward the end of the season, getting the team to 8-8, should not paper over losses to Seattle, Arizona, and Buffalo.

After so much upheaval before the season, with the team’s free-agent shopping spree bringing in big names and bigger egos, it’s understandable if continuity and calm were the theme for this offseason. But again, it feels like the Eagles are so, so close. This time, they’re just a defensive coordinator away. I don’t know if my heart can take it.