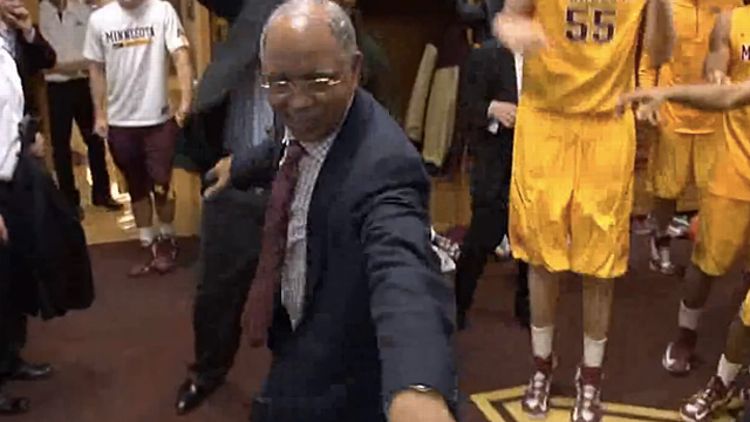 When I think of Tubby Smith, I initially think back to my childhood, which coincided with his days as the men’s basketball coach at the University of Georgia. A trailblazer, he was, becoming the school’s first black head coach.

To go with that, when I think of Tubby Smith, I also think of a serious man. A disciplinarian. An esteemed gentleman, doubling as a pillar of the community, who is not only concerned with winning, but in molding boys and turning them into men. I have no hard evidence to show this is true, but the aura around him has always suggested such.

Last night, at his current gig as the head coach at the University of Minnesota, his team pulled off an upset of the no. 20 Wisconsin Badgers. Of course, this was reason to celebrate, but probably not for someone like Tubby. Tubby doesn’t get excited with a little upset. This man has won a title before. He’s seen the mountaintop.

So it’s no surprise to see all-business Tubby walk into the locker room, looking statesmanly, presumably to congratulate his team, but also to remind them things like “you take this win, and you build on it, on and off the court” and “never forget, tomorrow is a new day” and “now we have to work twice as hard.”

Here it comes, the wise, tough love words of The Tubby. First, the congratulations:

And then, more congratulations?

“Today is a wonderful day, fellas.”

Wait, did someone just turn on Ke$ha?

TUBBS, I DIDN’T KNOW YOU COULD GET DOWN LIKE THAT.

GOPHERS, HOW YOUR HEAD COACH GET DOWN LIKE THAT.

Thank you, Tubby, for teaching us that you can never judge a book by his cover. Even in this, a “Die Young” dance-break mosh pit, you still managed to hit us with the life lessons.

As for your team, they’re already responding marvelously: