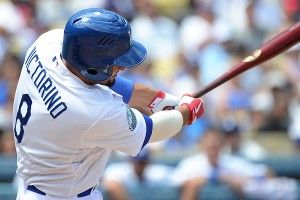 We covered the American League’s trade deadline fallout on Wednesday. Now, on to the National League.

The Pence trade upgrades the team’s offense and provides a much-needed right-handed bat. But Pence isn’t a star, and the whole Carlos Beltran–Hunter Pence merry-go-round looks a little strange when you take a step back. Leaving past decisions aside, the Giants will now hope for Pablo Sandoval to get well soon while perusing the August waiver wire. Finding quality starting middle infielders, the Giants’ biggest need, will be tough. But finding quality relief pitchers, another need, could be doable.

We covered the Victorino deal: Not nearly the player he was last year, but still an upgrade over Juan Rivera, Bobby Abreu, Tony Gwynn Jr., and the ghost of Billy Ashley, and for a reasonable price. The League trade was more of a puzzler. His command has been lousy all year, with his walk rate more than doubling from 2011’s mark to 3.8 walks per nine innings. Maybe most troubling, his line drive rate has rocketed to 26.6 percent. If that’s a fluke ready to regress, fine. But you have to wonder if League’s misplaced location is leading to fat pitches getting smoked a bit too often. The Dodgers, like the Giants, stood to benefit from getting a bullpen arm. Just not sure League was the right guy to target.

Kevin Towers must really like the idea of Scott Podsednik as a fifth outfielder, because going from Breslow — a left-hander who can get hitters on either side out — to the perennially mashable Albers is a big downgrade. The D-Backs did consider trading Justin Upton for a while, and also pursued a front-line starting pitcher with last year’s number-two Daniel Hudson out for the year. But nothing materialized. They still might be the most talented team in the division 1 through 25, and they’re very much in this race with two months to go.

Carlos Quentin and Huston Street figured to be San Diego’s two most attractive trade commodities. But the same factors that made them desirable for other teams were also compelling for the Padres, resulting in both players landing multiyear deals. Given the dearth of power on the Padres roster and the great difficulties left-handed hitters can have with Petco Park’s Yellowstone-like dimensions in right-center, you can see the logic in giving Quentin a three-year, $27 million deal. Given Street’s injury history and the fact that it’s easier to find productive relief pitchers than middle-of-the-order hitters, that two-year, $14 million contract was more of a head-scratcher.

Michael Cuddyer, Rafael Betancourt, and Matt Belisle all seemed like potentially enticing trade candidates. But in the end, only Jeremy Guthrie, a pitcher who couldn’t get anybody out, and Marco Scutaro, a 36-year-old shortstop on his last legs, got dealt, and for next to nothing in return. It’s been a lost season in Denver, and Dan O’Dowd’s run as the fourth-longest-tenured general manager in baseball is now effectively over, except in title.

Broxton isn’t the fire-breathing strikeout machine he used to be (2012: 6.3 K/9 IP; career: 11.1 K/9 IP). But the new, post-injury Broxton is still a capable relief pitcher, with a lofty 56.6 percent ground ball rate and only seven extra-base hits allowed all season. Jose Arredondo suddenly turned into a piñata in July, and Logan Ondrusek has been awful, making Broxton a useful pickup, even for a team with the best bullpen ERA in baseball.

McGehee and Sanchez essentially cancel each other out as part-time first basemen who can hit lefties, except Sanchez has a whiff of potential, having made the All-Star team a year ago. That redundancy doesn’t excuse trading for Chad Qualls, of course; the problem with having Chad Qualls on your roster is you might be tempted to use him with something less than a 47-run lead. Snider is the bigger upside play here, being a first-round pick who was lauded for hitting tools out of high school. Six years later, he’s a strikeout machine, but still just 24. The Pirates obviously believe Snider can be a plus player for the next few years, because they gave up a surer thing in Lincoln. If you’re giving up a valuable swingman with a strikeout-to-walk rate above 4-to-1, in the middle of a pennant race, you obviously think highly of the new guy.

The Cardinals didn’t have much in their bullpen other than closer Jason Motte and top setup man Mitchell Boggs, thus the impetus to make the deal. Mujica might not be much of an upgrade, though. He has yielded a scary 1.4 homers per 9 innings this year, which is right around his career average, so it’s not a fluke. On the plus side, he’s maintained a low walk rate for the past few years, and has been durable, tossing 239⅓ innings from 2009 through 2011. The hope is that Mujica and his fellow 2012 struggler and recent pickup Brian Fuentes can serve as useful bridges from the Cardinals’ starters to their big two at the back of the pen. An August reliever waiver pickup shouldn’t shock anyone, though.

They picked up hard-throwing righty Fautino De Los Santos on the 29th, adding a potentially explosive arm to a bullpen that sorely needs strike-throwers. The Brewers’ top offseason priority should be finding the succubus who went to town on Rickie Weeks.

Being forced to settle for less than Randall Delgado in a Dempster trade isn’t what the Cubs had in mind. Still, they acquired an intriguing blend of prospects, with Vizcaino the biggest wild card. Acquiring a 21-year-old phenom in the middle of Tommy John rehab is either crazy or crazy like a fox. Exactly the kind of move you want to make if you’re starting from scratch the way the Cubs are.

To be fair, Jeff Luhnow had already chucked everything that wasn’t nailed to the floor. Like the Cubs, the Astros were going for volume, hoping a couple of the many prospects acquired in a rebuilding year turn into something good.

Of all the teams to stand pat at the deadline, this was the most disappointing. The Braves are nipping at the Nationals’ heels, for one thing. For another, even though Washington ranked near the league leaders in runs scored last month, the Nats still have multiple lineup holes, some of them hopefully temporary (center field and shortstop, which await the returns of Jayson Werth — who’d move Bryce Harper to center — and Ian Desmond) and some more permanent (Wilson Ramos is out for the year, leaving catcher as a sore spot). The Nats were also said to be interested in starting pitching, with Stephen Strasburg’s mysterious innings cap looming. You make a deal if it’ll help your team, and we’re not privy to every offer that does or doesn’t come down the pike. But if you’re a fan of baseball in a city that hasn’t hosted a playoff game since the ’30s, it’s tough not to be a bit frustrated.

Coming into the spring, the Braves looked like they might have more starting pitching depth than any other NL team, with a mix of veterans and a deep stable of young arms that included Vizcaino, Julio Teheran, and Randall Delgado. Then Vizcaino went under the knife, Teheran hit a wall in Triple-A (which might’ve been related to him being all of 21 years old), and Delgado has been merely serviceable at the back end of the rotation (which might be related to him being all of 22 years old). With injuries to some of the incumbents, the kids not quite ready, Chipper Jones walking off into the sunset, and a really good team on the field, the Braves rolled the dice, cashing in some of that young pitching for a couple of win-now upgrades. Maholm is a solid number-four starter who has allowed zero or one run in each of his past six starts. Johnson is a versatile fourth outfielder who has hit lefties well for most of his career. Maybe Vizcaino comes back to haunt the Braves two or three years down the road. Atlanta’s got more pressing motivation in play right now.

They might’ve been able to sell a spare part or two, with Scott Hairston’s name popping up in a few rumors. But again, if the market doesn’t bear anything interesting, there’s no shame in hanging onto veterans till next year. Here’s a fun hypothetical for you: What would 37-year-old sudden superstar R.A. Dickey have fetched if the Mets had put him out there?

Sanchez isn’t as young as you’d think (he’s nearly 29), so it’s unlikely the Marlins are saying good-bye to a future star there. Though Hernandez doesn’t offer much upside at this point, the pick acquisition adds about a million and a half to Miami’s draft budget, a nice little coup. Cox, like Snider, is a first-round draft pick who hasn’t panned out. As ESPN prospect maven Keith Law noted in his take on that trade, Cox had posted a .294 OBP at Triple-A this year, and hadn’t drawn a walk since June 21. The Marlins had previously traded away another high draft pick who didn’t pan out in Matt Dominguez. Despite Cox’s struggles, he’s a better choice to be the top third-base prospect in the Marlins’ high minors.

Makes sense, times two. The big question: With Pence, Victorino, Joe Blanton, and Placido Polanco all likely off the books at year’s end, do the Phillies make a run at Michael Bourn in the offseason? Or even Josh Hamilton? If you’re going to spend money, and you’re going to go stars and scrubs, why not go all the way?

About Last Night: Yo, Adrian!