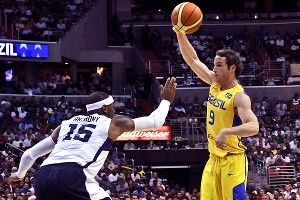 Of the five preliminary games that the United States played in preparation for the Olympics, the Brazilian national team may have given the U.S. its biggest scare. Brazil eventually faded after building an early double-digit lead, but they revealed which parts of their game can give Team USA trouble.

In Team USA’s game against Brazil, Mike Krzyzewski had his guys ramp up the pressure, almost as if they were testing whether or not they could press Brazil in the Olympics. It makes sense. Team USA is a team full of phenomenal athletes with long wingspans and great footwork, and when they pressure an offense, they have the potential to force turnovers at a high rate.

What Team USA found was that Brazil could not only handle the pressure, but also use it to create easy scoring opportunities. Brazil’s guards are comfortable when pressed, and they aren’t hesitant when they see Team USA meeting them full-court. Teams press to get their opponents away from what they do best, but it seems that Brazil might be at its best when in scramble mode while dealing with the increased pressure.

One interesting note when watching Brazil’s “press break” is seeing who is inbounding the basketball. Unlike most teams, which have a big man inbound the ball, Brazil were using their point guard, Marcelo Huertas. Huertas would pass the ball in, quickly establish position inbounds, then get the basketball back. If he was denied the ball, Brazil’s other guard would simply bring it up. This is important because it takes away Team USA’s option to trap the first pass. If a team has a big man inbounding the ball, a traditional press method is to trap the point guard after he gets the initial pass. This forces the ball back to the inbounds passer, and as passing lanes are denied, he’s forced to dribble the ball up the court. Teams aren’t going to trap the first pass against Brazil because that would mean leaving Huertas free to run up the floor.

In watching Brazil handle Team USA’s pressure, we saw some fantastic play from Marcelo Huertas. If the Americans bring that pressure to the game again, he’s the most important player on his team.

Another interesting way I saw Brazil use Huertas against the United States during their prep game was providing him with drag screens in delayed transition opportunities.

A drag screen is basically a screen set by an offense’s trailing big after the ball handler’s attempt to push the ball in transition fails. It’s a way to initiate the offense without having to slow things down. It’s incredibly tough to defend, especially when the ball handler is a point guard of Huertas’s quality. These screens either help the big man setting them get open after releasing, or they allow Huertas to get into the lane and create.

Contender. I know that Brazil lost to Team USA by 11 points during their exhibition game in Washington, D.C., but I was very impressed with Brazil’s offensive strategy for handling the defensive pressure and, at times, using it against the Americans. If they can show the same kind of offense during the Olympics, the Brazilians do have a chance to down the Americans.

After the Gold Rush: On Dismantling the Phillies