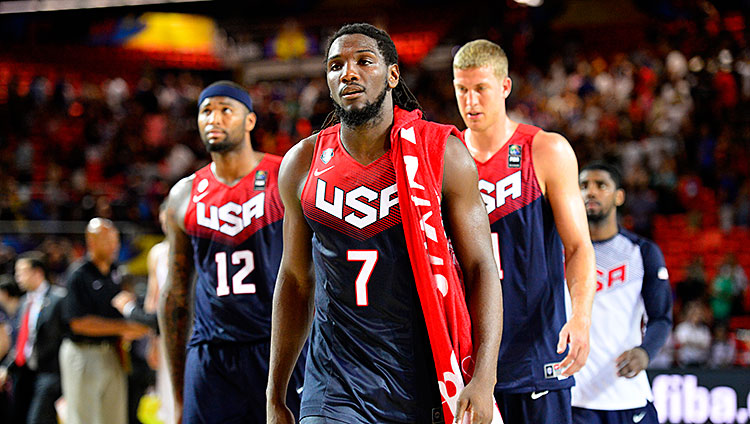 In the post–1992 Dream Team era, USA Basketball has two default settings: (1) TOTAL DOMINATION and (2) Lessons Learned. Team USA either must be smiting ruination upon the world’s basketball pretenders, or it must be learning important object lessons about respecting one’s opponents so as to better dominate them in the future. This is how we, as a nation, process Team USA’s games. The U.S. gave us a taste of both settings as group play in the FIBA Basketball World Cup (“The World Cup With Hands!”) got under way this weekend.

Perhaps no team in the tournament better represents FIBA’s real World Cup aspirations than Finland does. You can’t be the biggest single-sport international tournament in the world without a little corruption, without just a wee sprinkle of grease on the palm. FIBA’s World Cup isn’t quite at the level of multimillion-dollar slush funds and stadiums built on the skeletons of construction workers, but a journey of a thousand miles begins with the first step.

Taking those first baby steps, FIBA awarded Finland a wild-card spot in the tournament in exchange for in-game advertising on the popular mobile-platform time waster Angry Birds. This is not to say Finland does not deserve to be in the tournament. It is an improving basketball nation, currently no. 39 in FIBA’s world rankings (who knows how accurate those are, but OK), and it verrrrrry nearly had savior of the Wizards’ postseason dreams Drew Gooden on its team until his paperwork fell through. Guard Petteri Koponen was the 30th pick in the 2007 NBA draft; forward Erik Murphy will try to stay attached to the fringes of the LeBron-ified Cavs; and you might remember Hanno Möttölä and his umlauts from the couple cups of coffee he sipped in an Atlanta Hawks uniform.

In other words, Finland has a core of guys good enough to make the NBA, and a bunch of other guys who play professionally in Europe. It just sucks that it got picked over a team like Canada, which is in the midst of developing a golden generation of basketball talent. But as Lisa Lisa and Cult Jam once said, “Que sera, que sera.”

Anyway, Team USA hit Finland like a nuclear bomb detonating over a cardboard dollhouse. My word. Finland came out a bit over-geeked, with some 8,000 Finnish fans in full throat urging the team on, and kept things to a seemingly manageable 15-point deficit after one quarter. In the second quarter, Finland went 0-for-17 from the floor and managed a mere two points, both off free throws. The USA’s Tom Thibodeau–designed defense garroted Finnish pick-and-rolls, chasing ball handlers off screens and generally throwing the Finns’ offense into a state of turnover-disgorging chaos. Finland had 31 turnovers to only 18 made baskets.

Finland, why hast thou forsaken me?

“Who were the top Team USA performers?” you might be asking.

Well, in a game like this, that’s a bit like asking which was the dominant shark in the feeding frenzy, BUT! Anthony Davis patrolled the paint like a Nazgûl, dissuading Finnish forays with his freak length and mobility, and scoring 17 points on a frighteningly varied array of face-up rip moves. Klay Thompson had 18 points, going 4-of-7 on 3s. James Harden — repeat: JAMES HARDEN — played defense!!! He was active in the passing lanes, forcing four steals, and he blocked a shot. AGAIN: JAMES HARDEN BLOCKED A SHOT. He also scored nine points with three boards and three assists, which is nice, but not nearly as noteworthy.

The American stranglehold loosened in the second half, mercifully, and Finland got into something approaching a cohesive offense, but the die was cast. USA 114, Finland 55. And Gooden is sending a box of candies to the Finnish bureaucrat who held off on his immigration papers.

It was perhaps inevitable that, after the way it casually tore out Finland’s soul, the U.S. would let down its guard in the second game of a back-to-back in group play of an international tournament that very few people besides degenerate basketball addicts care about back home. Turkey is a frisky team, with a strong history of showings in recent international play (finalists at the 2010 iteration of this tournament, falling to the U.S. in the gold-medal game), anchored in the middle by new Pelican Omer Asik.

And let down, it did. The Americans struggled to separate themselves from the Turks for three of the four quarters, and they were flummoxed by coach Ergin Ataman’s zone defense. Shots weren’t falling, the ball didn’t move enough, and the U.S.’s annoyance bubbled over into some hearty bitching at the referees over calls that were perceived to be of the not-correct variety.

Sometimes that was the case, but more often than not, it was Steph Curry (3-of-11 from the floor) or Derrick Rose (0-for-4) or Harden or Rudy Gay just grabbing Turkish players and then making the international what-kind-of-call-is-that face and matching gestures. (My favorite excuse for when refs call ghost travels and poltergeist fouls on the Americans is some variation of this: “These refs just aren’t used to seeing this kind of athleticism and skill.” I love that one. Like the refs are normally officiating five-on-fives on dirt courts with a goatskin ball. It’s international play; sometimes refs are just shaky. Davis is incredible, but he is not a centaur.) In addition to the lumpy offense and foul-clogged flow, Team USA straight got handled on the boards in the first half, 21 to 12. Turkey led 40-35 at the half.

Ah, but this is all part of the USA Basketball experience! It’s the binary matrix of American basketball expectations! Saturday was for domination. Sunday is when an unmotivated U.S. squad realized that opponents actually know how to play basketball and stuff.

This is something the U.S. has to be reminded of from time to time, most notably in the period from 2002 to 2006, when successive U.S. teams — weakened by uninterest from top talent, general overconfidence, bad planning, or some combination thereof — fell to some of the most exciting and creative non-American basketball squads the world has ever seen: Argentina (Ginobili, Scola, Nocioni), Greece (Spanoulis, Diamantidis), and Spain (the Gasols, Navarro, Calderon, Garbajosa). Those three gut-punch wake-up calls provided the blueprint for beating Team USA and were something of a perfect storm of American basketball disaster: American hoop apathy after a long period of success combined with a particular nation’s golden generation of talent playing their freaking asses off.

Team USA pulled away toward the end of the third quarter, breaking loose from Turkey’s slow-it-down zone into the open court. Davis scored all 19 of his points in the second half, Kenneth Faried harried Turkish bigs and galloped to a 22-point outing, and Harden got into his patented drive-the-lane-and-draw-fouls game that is so frustrating to watch and also so damn effective. Team USA went into the fourth up by six and ended the game winning by 21.

Up next for Team USA: New Zealand and the deceptively named “Tall Blacks,” Tuesday, 11:30 a.m. ET.