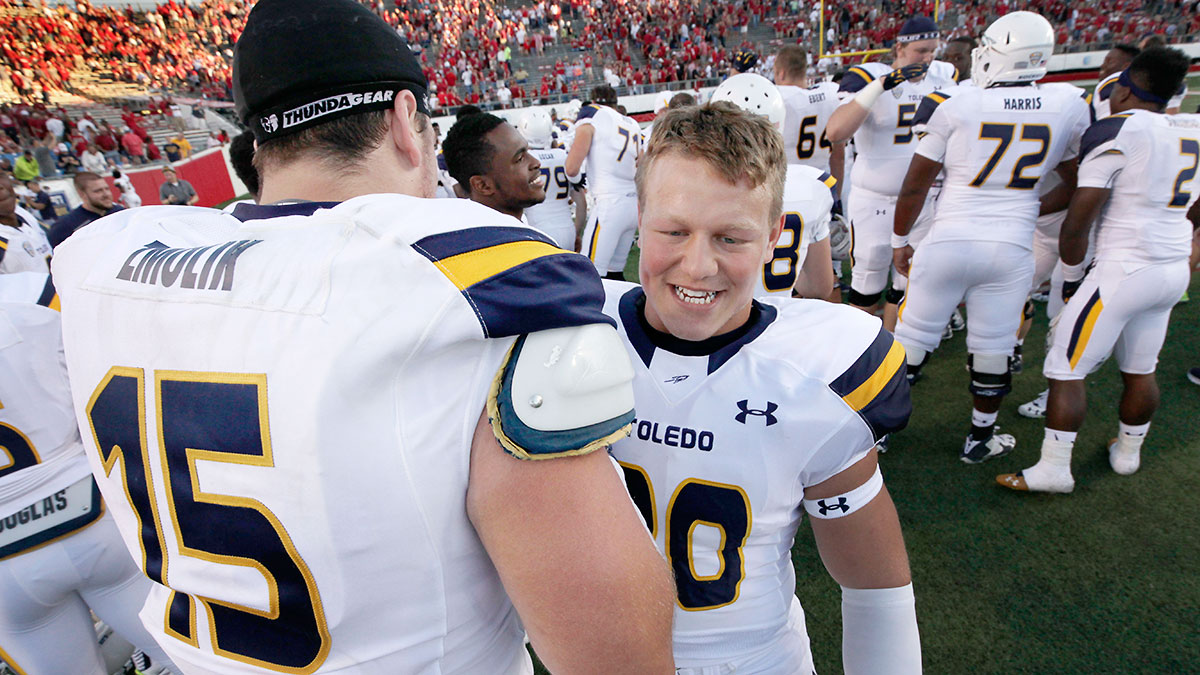 Can we traffic in extremely far-fetched hypotheticals for a moment? Best as I can determine, this is one of the primary reasons that college football exists, so why the hell not?

Let’s say Toledo beats Iowa State this weekend, and let’s say Toledo then goes on to pummel its Mid-American Conference foes and finish undefeated. Meanwhile, let’s say the SEC West goes topsy-turvy and every team finishes with at least one loss, and the division winner proves to be an Arkansas squad that stood out as a trendy pick before the season began. Let us say, then, that Arkansas wins the SEC championship game — and let us presume, further, that no major-conference champion goes undefeated, and that at least two others also finish with a pair of defeats — and that Toledo wins the MAC championship game.

The fuel for this scenario, of course, is that Toledo beat Arkansas 16-12 in Little Rock last weekend, in a game that felt less like a fluke and more like a stoic beatdown of one of the most physical teams in the country. But I’m also prodding at the notion that teams outside the Power 5 conferences in college football have been theoretically tossed a back-door consolation by reserving a spot for the best among them in one of the New Year’s Six bowl games. Because in a larger sense, this is not only about Toledo. This is about the fact that we are getting closer and closer to the next great confrontation in college football’s eternal argument, because sometime in the near future — maybe not this year, and maybe not even next year, but soon, and for the rest of its contract — the playoff committee will find that its hand is forced. It cannot ignore the limitations of the system forever, because eventually those limitations will creep up and slap it across the face. Eventually, the committee will have to figure out how to handle, at least in a competitive sense, the ongoing presence of potentially playoff-worthy teams outside the Power 5 conferences.

And the sooner that happens, the better.

I mean, since we’ve already dealt in hypotheticals, can we also traffic in tacit acknowledgements? Everyone knows that a four-team playoff is not big enough for a sport with five major conferences; everyone knows that a four-team playoff is a temporary fix that will eventually be expanded. The only questions are when it will expand, and how much it should expand, and how it will be formatted, which relates to perhaps the most important question: What’s the reasoning behind that expansion? Nobody wants the playoff to be so unwieldy that it dilutes the regular season, and nobody wants a team that feels otherwise unworthy to be rewarded with a shot at a national championship. But this is the question I feel obligated to ask every year at this time: What do we really want out of a playoff in the first place? Do we want the underdog to matter in college football?

And this is why I will continue to advocate for a spot in the playoffs for a team like the hypothetical Toledo squad I just created out of thin air. Because I understand that college football’s top-heavy hierarchy tends to advocate for the status quo; and I further understand that the future of the sport may be dictated by the inevitable O’Bannon-ish practicalities involved in remedying its central hypocrisy. Maybe the committee will be bailed out by financial realities; maybe the conferences outside the Power 5 will be elbowed out and will eventually have no choice but to form their own division and play on USFL Saturdays.

But honestly, I hope that never happens, in large part because of what took place last Saturday. Not only did Toledo beat Arkansas, but FCS team Jacksonville State nearly beat Auburn and Bowling Green upended Maryland. And perhaps that last result doesn’t feel quite as important, and perhaps you want to evoke Nate Silver and declare these upsets the minuscule exception to the rule, and perhaps you tend to believe that the potential of David over Goliath in college football is too slim to make it worth factoring into the playoff.

In which case, you’re missing the point, because this is about possibility rather than probability.

And the truth is, at least right now, the best of the small-conference teams (and even the top-tier FCS teams) are often legitimately competitive with far larger programs; and the truth is that college football is more fascinating than it’s ever been largely because of this expanded sense of uncertainty. (Temple hadn’t beaten Penn State since 1941 for a reason; Temple crept up slowly on Penn State over the years and then beat the hell out of the Nittany Lions in 2015 for a reason.)

The Hound of Basketville: On Kareem Abdul-Jabbar’s Detective Novel