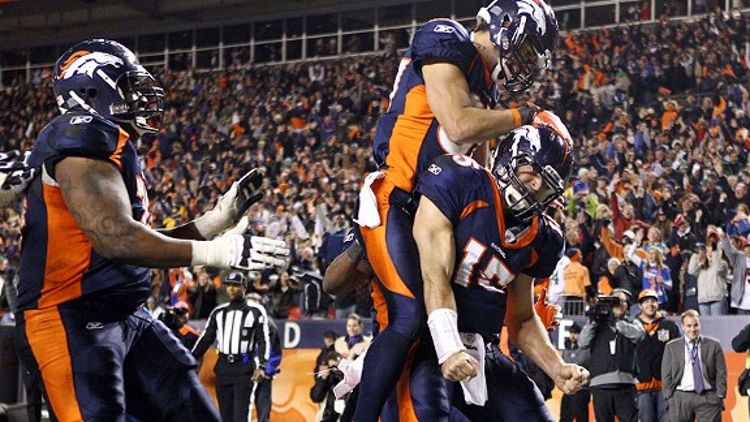 Let’s start at the end, at the bottom of a pile-up of football players, with Mile High rocking and John Elway standing and applauding, Rex Ryan throwing up his hands in dismay and the NFL Network’s Mike Mayock, who had spent the whole night excellently articulating the problems and promise inherent in the Broncos read-option offense, simply laughing. He, like most of the people at home, was probably thinking the same thing, invoking that one place Tim Tebow is trying to avoid more than anything: “What the hell?”

Yeah, the circumstances demanded such a reaction. If, by some tilting of the Earth’s axis, that had been Brady Quinn leading the Broncos on a 95-yard game-winning drive, I’m sure he would have gotten a couple of man-hugs out of the bargain as well. But this was different. This was a team that had just received one of the greatest rewards you can get in life; the one where putting your faith in someone else pays off.

After every underthrown ball and every broken play, the Denver Broncos came back to the huddle with their heads held high, never showing up their quarterback, no matter how off target or out of his depth he was. And when Tebow couldn’t get anything going, which, let’s be clear, was the majority of the game, the defense came out and played like highly irritated Mongol raiders.

For most of the night, I was looking for a reason why. Why Mark Sanchez (who, for all his problems, has led the Jets to consecutive AFC Championship games) was getting nothing but shade from Plaxico Burress and hot, angry breath from offensive coordinator Brian Schottenheimer while Tebow, who was playing quarterback with the grace of an ice-skating Bambi, was getting the undying support of his teammates.

For the answer, go back to 3:55 remaining in the fourth quarter. Tebow, barely bothering to look upfield, cradles the ball and takes off like a Greyhound bus driven by a meth head. There on the horizon, he sees the usually unwelcoming vista that is Revis Island. And what does he do? Does he trot out of bounds and save some clock and spare himself the contact? Nope. He barrels over Revis like a hurricane, stays in bounds, and gets that much closer to the end zone.

Because at the end of the game, it might just be 13-10 and you might just have a shot. You might just be 20 yards out and your quarterback might just be able to run like Mike Alstott. And with the home crowd losing their minds in the thin air, and the terrifying Jets defense on their back foot and everyone in America watching because your very average AFC West team has become the center of the football universe, your quarterback might just do the one thing he was put on Earth to do: make a perfect read on a safety who is overcommitted to the inside and take off with only one destination in mind. He might do what he said he would, what he asked you to believe he could do. He might just win the damn thing for you.