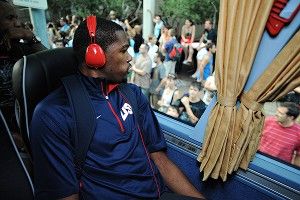 Team USA took a break yesterday from its string of pre-Olympics beat downs to face an Argentina team still made up mostly of players who took home Olympic gold in 2004. What looked like just another blowout quickly became a close one as the Americans struggled from the outside. The result was an 86-80 win for the U.S. in its first real test in the run-up to the London games, and one that provided a few main takeaways:

1. The Value of Tyson Chandler

It’s hard to imagine that the NBA’s Defensive Player of the Year could still be underrated around the basketball world, but with Chandler, it feels that way. There’s an argument to be made that Chandler — the man responsible for bringing the Knicks’ defense up more than 15 spots from a year ago — was the league’s most valuable player not named LeBron James or Kevin Durant. For Team USA, that qualifier might not even be necessary.

The Olympic team’s only true center was a force again on the defensive end yesterday against Argentina as he changed shots around the rim and cleaned up on the offensive glass. With Blake Griffin and Dwight Howard absent, this team’s concern was always going to be its lack of size, and that problem was on display yesterday. Mike Krzyzewski’s smaller lineups with the likes of Carmelo Anthony at the 4 struggled when pitted against NBA talent like Luis Scola. Tuesday night’s game against Spain should be an even bigger test in this regard for the U.S., and it’s against the Spaniards that Chandler’s value should be as noticeable as ever.

It’s been a rough year for Carmelo. He’s managed to derail the Linsanity train, become a symbol of everything wrong with the Knicks, and be all but forgotten in the conversation among the game’s truly elite. At the end of that road, though, was another chance to play for Team USA, an environment in which Anthony shined four years ago in Beijing. That’s why Sunday could not have been fun.

Anthony looked out of sync for a lot of yesterday’s win as he clanked jumpers, struggled to defend the post, and had trouble even holding on to the ball at times. The actual basketball elements of playing the Olympics might not translate directly to the NBA game, but it’s always interesting to watch the player dynamics on and away from the court. What so many young players got out of the Beijing experience was a lift in confidence. Watching Carmelo, what’s going to be interesting is seeing how his demeanor changes (or doesn’t change) during these Olympics.

3. The Post-Finals World of Kevin Durant

After yesterday’s performance, it’s become clear that no player’s Olympics demeanor is going to be more scrutinized or talked about than Kevin Durant’s. Durant started off yesterday’s win dropping international 3-pointers like they were free throws, and by game’s end, he was 7-for-11 from behind the arc and finished with a team-high 27 points.

Most of the reports about Durant after Oklahoma City’s Finals loss were about how he took the whole experience very hard, and it’s that vulnerability that makes it difficult not to watch every move Durant makes this summer a bit more closely. Durant was apparently silent for most of the postgame press conference with Krzyzewski yesterday, and although there’s no sense in trying to pinpoint exactly why, it seems to be of note no matter what the reason.

To go with his 27 points, Durant was also the source of a first-half scuffle with several of the Argentine players. After a Chris Paul foul prompted Scola to say something to the point guard, it was Durant who was quickest to Paul’s aid and escalated the situation a bit further than it might have gone otherwise. Again, these are small moments that even added together may not mean much, but there’s no doubt this summer provides a unique look at a formidable period for one of the league’s biggest stars. Usually when a player experiences a lasting loss like Durant did, we don’t see him again until October, and any real emotions are gone in favor of canned responses about getting better and all that. London provides a chance to watch Durant deal with his pain in real time, and I know that, at least for me, it’s going to be hard to look away.