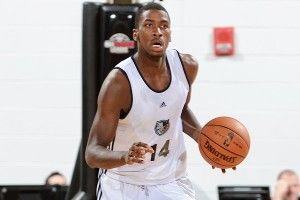 The NBA’s summer league in Vegas is basically summer camp for basketball junkies. It occupies a bizarre niche in basketball fandom that’s built entirely around the idea that all dunks are equally valid and exciting, regardless of whether they’re pulled off by superstars or D-League benchwarmers-to-be. Bloggers, coaches, would-be scouts, and the occasional group of supporters make their way to a pair of gyms on the UNLV campus and get to see a group of desperately hungry players trying to impress their way into somebody’s heart. The games themselves, of course, serve mostly as backdrops for individual moments of brilliance. They’re on NBA TV, but there’s so much missing from the summer league experience in television. There are secret joys of the summer league that make it unlike any basketball experience on the planet, and I have to share them with you.

First, there’s the blessing of watching a player who is head and shoulders above everybody else on the court take over a game. You can see that on television, and it translates even better at an NBA game, but when it’s in front of a thousand people in a women’s basketball gym, it’s plain as day. Take Michael Kidd-Gilchrist’s performance in the Bobcats-Kings game from the first night, a game that basically ended up serving as the quintessential example of the Tao of summer league for me. On a court with the likes of Kemba Walker and Thomas Robinson, themselves fellow college stars, it would seem unlikely that a versatile, subtle player like MKG would really dominate a game. Well, it happened, and it was beautiful. It felt like watching a pickup game where everyone on the court knows one guy is going to do just about whatever he wants whenever he wants … except with a group of NBA-caliber players watching a rookie during his first game in a pro jersey.

Alternatively, you get the compelling spectacle of watching somebody famous suck. In that same game, Jimmer Fredette shot 2-of-11 from the floor, missed eight 3s, turned the ball over twice, and had a shot clock violation occur while he was dribbling aimlessly around the floor. If Jimmer Fredette’s name were Fimmer Jedette, the Kings would have cut him after the game. It was truly bizarre to see, and naturally, Jimmer responded by pumping in 30 against the Rockets later on that week.

What flustered Fredette so in that game against the Bobcats? Why, it was the full-court press that the Bobcats suddenly decided to institute for a couple of quarters or so! Do you remember when your second-grade CYO team got unexpectedly pressed for the first time and you basically proceeded to throw the ball away eight times in a row, doing the same thing each time before your coach angrily called a time-out and taught you how to handle it? That’s almost exactly how the Kings reacted to this full-court press, except for the bit about solving it after the time-out. It was so incredible and weird at the same time. The press also led an NBA scout watching the game to call his general manager with this foreboding message that I’ll try to paraphrase here: “Listen. Don’t bother showing up with a team this season. There’s no point. The Bobcats have mastered the full-court press. The Kings can’t advance the ball past half court. Charlotte’s going 82-0.”

That’s one of the other great things about summer league: You’re guaranteed to see some crazy stuff you’ll never get to witness in real NBA games, but you get to see it with a group of players athletically gifted and/or notable enough to make it exhilarating. Sure, that full-court press was a great example, but an even better one might have been the work that Jan Vesely did during the opening game of the tournament. The Wizards center showed up to summer league with his A-game in tow, fouling out in just under 31 minutes of action. Now, I know what you’re saying. Jan Vesely fouling out in 31 minutes isn’t that impressive. Here is what you are forgetting, though: It takes 10 fouls to foul out of a summer league game. That is the work Jan Vesely did. Not to be outdone, long-lost center David Harrison showed up in summer league for the Mavericks a couple of days later and promptly picked up two fouls and a technical in the opening three minutes of action. Fortunately, Harrison slowed down some and managed to finish the game with eight fouls. For someone who is a fan of RHI-level stat compiling, this was great fun.

The best part about summer league, though, is the random-person-spotting that attendees get to go through in the tiny Cox Pavilion gym. The whowasthat? potential is enormous. There are a ton of ex-players hanging around for various reasons. The likes of Chuck Person and Jacque Vaughn were coaching summer league teams, providing a great opportunity to “remember when” and feel incredibly old at the same time. Vaughn was actually pulled from his summer league job coaching the Spurs amid reports that he would take over as the head coach of the Magic, which was the closest thing to the moment I was waiting for during all of summer league. I was really hoping that somebody would whisper something in Rockets head coach Kelvin Sampson’s ear and, suddenly, their entire lineup would get subbed out and removed from the game as the precursor to a Dwight Howard trade. (I’m kinda upset that Daryl Morey didn’t do this just to give every single NBA writer in attendance a heart attack.)

Oh — so, yes, randoms. Anthony Mason showed up, which led to five minutes of discussion as to whether it was actually Anthony Mason or not. Various NBA players from the past showed up to compete; in addition to Harrison, the likes of Jannero Pargo and Leon Powe made their way back into the NBA consciousness with summer league appearances. Rick Carlisle and Monty Williams were hanging out in the lobby shooting the breeze next to the cookie cart. This was with my untrained eye; basically, if you’re a die-hard NBA fan, you’re going to spend at least one day at summer league doing this the entire time.

The most notable appearances at summer league, though, touched the Jeremy Lin saga in one way or another. On that fateful day when the Knicks decided to pass on re-signing Lin, owner James Dolan decided to show up and take in his team’s action before heading to meetings with his staff. He left before the game ended, but it was a surreal moment to see a man getting almost universally trashed at the time sitting somberly and quietly, watching a group of players who will almost surely never play for his team, seemingly without a care in the world.

Lin is the poster child for how a player from the summer league can end up on the national stage. He averaged only 9.8 points and 1.8 assists during his time with the Mavericks in the 2010 summer league, but his performance for the Knicks last season basically justifies the idea of falling in love with a player who plays well in Vegas. That the guy sitting at the end of the bench might actually end up being a star. That the scouts aren’t perfect.

The player who got the biggest ovations in summer league, though, was the antithesis of Jeremy Lin: Adam Morrison. If Lin’s an undrafted free agent who shocked everyone by playing at an extremely high level when he got the chance, Morrison’s the opposite, as a third overall pick who got tons of playing time and was dreadful for virtually all of it. Playing for the Clippers, though, Morrison was brilliant. He averaged 20 points across his five games and got “MVP” chants during the final day of the tournament. It was really fun to watch, and while Morrison may never fulfill the promise he showed in college, it undoubtedly did a lot to kick-start his chances of making an NBA roster again. It’s fun to root for a guy like Morrison, but Lin’s career path gave an air of legitimacy to the whole thing. There was a feeling of “Maybe he really can play” around Morrison that wouldn’t have been there two years ago. And if Lin’s success taught us anything as fans and analysts, it’s that we often underestimate the guy at the end of the bench. The devil we don’t know might not be that scary after all. And in an event like the summer league, where most of the players are the devils you either don’t know or forgot about, having that air of belief takes an otherwise fun diversion and adds genuine excitement about the proceedings. The possibility of seeing the next Jeremy Lin — or even the old Adam Morrison — is a joy unto itself.