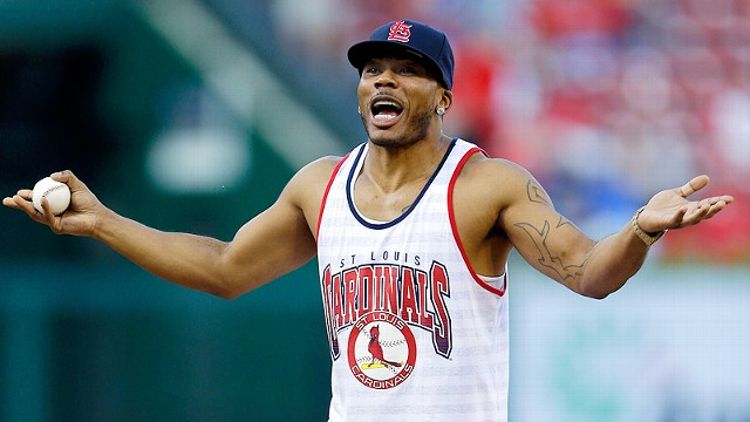 The Internet is a big place, and in the age of social media it’s important to stay current on all the ridiculous things that happen in sports. Every Friday, we’ll catch you up on important stories you might have missed. This week, we begin in St. Louis.

There are very few times in life when you might be depressed and hopeless and disgusted with yourself for missing a regular-season baseball game. It just doesn’t happen. Unless someone hits three home runs or attacks a pitcher, every regular-season baseball game is basically the same. If you missed one, don’t worry, there are 161 others. When do we see an exception to this rule?

Nelly night: “On Tuesday, August 6th, join the Cardinals for a special tribute to American Grammy Award-winning, hip hop recording artist, entrepreneur and proud St. Louisian – NELLY! Nelly will be on hand for a pregame ceremonial first pitch, and wants YOU to take home an exclusive giveaway! Fans who purchase the special Nelly Night Theme ticket will receive their own exclusive and unique Nelly Cardinals bobblehead!”

We’re all such failures.

Some additional facts and thoughts here:

2. Nelly Night spawned this headline: “Oops! Nelly Not So Hot In Herre With First Pitch At St. Louis Cardinals Game.”

3. You can see video of the first pitch here. Nelly blamed a miscommunication for the poor delivery. “’I thought it was a pitch out,’ he said post-pitch. ‘A pitch out was called. Freese called a pitch out, what they didn’t show was him giving me the fist outside and the guy didn’t even raise out he left me out to dry.'”

4. David Freese is no longer a hero in St. Louis for his inspiring rise to fame or his World Series home run. He betrayed Nelly. GODDAMN DISGRACEFUL.

5. In case you’re not familiar with St. Louis … Nelly is the closest thing St. Louis has to Li’l Sebastian.

6. He was also a star baseball player once. As STL Mag explains:

Nelly played basketball, baseball, and football at University City High School, where he was praised in his senior yearbook as a standout wide receiver: “Haynes was [quarterback Terrance] Wilkes’ favorite target this season, as the [University City] Lions’ leading receiver. He dazzled the crowd with amazing catches.” He also played for the St. Louis Amateur Baseball Association and later went to training camps for the Atlanta Braves and Pittsburgh Pirates. But “I got wrapped up in the streets,” he once told Rolling Stone. “Money was coming in faster than [team] letters, and I got distracted.”

7. “Money was coming in faster than [team] letters, and I got distracted.” This is also my excuse for quitting varsity tennis during the spring of my senior year.

8. Asked whether he wanted a Grammy or a championship ring, Nelly once said, “Oh, a championship ring. Definitely. Preferably a World Series ring with the Cardinals.” There’s gotta be a roster spot somewhere. Or — coaches get rings, right? Make him the bullpen coach. MAKE HIM THE BULLPEN COACH.

10. The best part of Nelly night: The Dodgers were on a 15-game road winning streak coming into Tuesday’s game with the Cardinals and were far and away the hottest team in the baseball. Then? BOOM, they ran into a buzzsaw. Carlos Beltran and someone named Matt Adams homered in the eighth, and the Dodgers’ record streak was done. I know absolutely nothing about baseball, but we all know what made the difference. We all know WHO made the difference.

.@Nelly_Mo will be happy to hear the Cardinals kept Nelly night rolling by playing this in the clubhouse postgame http://t.co/3xxUptUjfI

At least until the A’s have Too Short night.

As for the rest of the Internet … We’ll keep things quick this week, because it’s Friday and you’re probably not paying attention anyway.

Fun With Jay Bilas and the NCAA

If you’re reading this column you’ve probably heard that Jay Bilas’s Twitter account went to an extra awesome place this week. You can see his tweets over here, where he exposed the NCAA’s blatant hypocrisy by pulling back the curtain on the officially licensed NCAA store. “The NCAA claims it doesn’t make money off individual athletes, just their teams and their sport.” Bilas:

It was glorious. Even better: After all this made its way around the Internet, the NCAA panicked and disabled the search function on its website. And NCAA president Mark Emmert announced the NCAA is getting out of the jersey business altogether because it’s hypocritical, which would be admirable if not for the hundreds of other websites that are still selling jerseys, exploiting college athletes the exact same way. Anyway, this loophole has been there for a while, but props to Bilas for making it obvious enough to send Emmert into a panic attack.

You probably hate the NCAA, and with good reason. But make sure to savor the current era. First because, as Will Leitch points out, whenever the NCAA finally implodes for real, the new reality could be just as messy and unfair. But more importantly, it’s just great that there’s a billion-dollar enterprise that everyone knows is bullshit — including Mark Emmert. We’re just going to spend the next few years with everything getting more and more ridiculous, and with people like Emmert looking more and more helpless.

It's prob allll type of creatures in the open sea !! #imcoolonthat

Great take. Nobody’s arguing. For more hot ocean takes, check out Danger Guerrero’s definitive commentary on the ocean, and why it should be avoided forever.

And then, on the other end of the spectrum…

Did You Know Wayne Gretzky Was Once a Babysitter for Robin Thicke?

Now you do! As fellow Canadian Alan Thicke remembers (via Puck Daddy):

I was reminded of it a few days ago on the occasion of the anniversary of his trade from Edmonton to Los Angeles (on Aug. 9, 1988). [Gretzky] was house-sitting at my house in L.A. the night he got traded. I was in Norway with my other son (Brennan), and Wayne and Janet were house-sitting for my son Robin (11 years old at the time). I called from Norway because I picked up the Oslo morning paper and saw pictures of Gretzky — but I couldn’t understand the text, of course. And I thought maybe there had been a fire, a mudslide, a drive-by shooting, who knows? So I called home, and I learned Wayne left early in the morning; he got traded last night. He got the call at about 9 p.m., and he was gone by 6 the next morning. So we had to find a substitute nanny instantly, which is not as bad as what Edmonton had to find to replace him.

The Adventures of Pau Gasol

Nobody knows why everything Pau Gasol does is hilarious, but I hope it never ends.

Additional fact: Jonathan Ogden’s experience playing football for St. Albans was nothing like my experience playing football for St. Albans. In fact, looking at that picture is just a reminder that, really, if you’re not a gigantic human and/or an athletic freak, there’s just no good reason to play football, because you will always end up getting throttled at the hands of someone like Jonathan Ogden. Just give up early, save yourself the time and medical bills. (Can’t wait to deliver that speech to my son one day.)

While we’re on the subject, Solid Verbal shared Vince Wilfork’s high school highlights this week, and they are every bit as vicious and nightmarish as you’d imagine. Don’t play football if you’re not Vince Wilfork or Jonathan Ogden.

The Life and Times of Mark Sanchez

Thanks for your support man! #classy RT @YOUNGSTOWN4LI4E .@Mark_Sanchez F*** YOU HOPE YOU TEAR YOUR ACL ON FRIDAY

Plaxico Burress tore his rotator cuff at Steelers training camp this week, an injury that’ll likely end his season and his career. It’s pretty terrible news. But you know what’s pretty great news? Plaxico Burress started his own line of luxury socks. This may be old news to some, but reader Zach Goldsmith brought this to our attention this week, and it needs to be celebrated here.

As the website explains: “The Plaxico Burress Collection is the brainchild of NFL star Plaxico Burress. An avid collector of luxury socks, Plaxico found himself always looking for the ‘perfect sock.’ Often, he would love the design, but not like the fit. Or he would like the fabric/material, and not like the length. Rather than continue to settle for the often limited styles his favorite stores had to offer, Plaxico decided to create his own brand. Confident that with his direction, the design team could create his ‘perfect sock.'”

The lesson: If the world won’t give you the “perfect sock,” then you go out and create the “perfect sock” yourself. The Plaxico Burress Collection is an inspiration to all of us. Be the change you want to see in the world. Wear it. Wear it on your feet.

This isn’t even the only athlete fashion line we found this week. There’s also Brad Richards’s button-down collection at Untuckit, whose website explains, “Finally, shirts designed to be worn untucked, at the perfect length.” FINALLY.

I can’t tell whether Richards is an owner, an investor, or just an enthusiastic brand ambassador. Either way, it’s just good to have him involved: “NHL Star Brad Richards knows shirts. Once dubbed the most stylish man in the NHL, Brad offers his sure-fire picks to draw oohs and ahs from onlookers!”

There you go: Brad Richards knows shirts, Plaxico knows socks. And if Plax is really done playing football, then nothing could make me happier than him retiring in style on the strength of a luxury sock fortune. (Socks > stocks.)

… And that’s it for this week. If you know of other athlete-funded fashion ventures, please send them my way. In the meantime, let’s start a movement to replace the national anthem with “Country Grammar.”