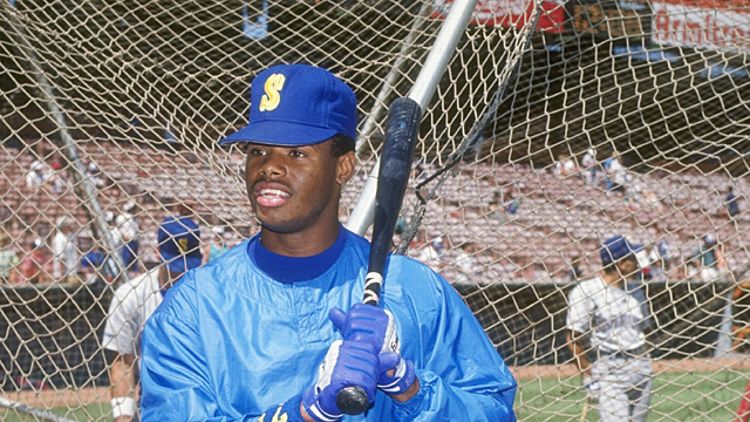 The Seattle Mariners are currently playing in their 37th season, and they have made the playoffs exactly four times. That brief run of success was bunched into an anomalistic seven-year span that saw the franchise tie a major league record with 116 regular-season wins in 2001, only to fall to the Yankees in the American League Championship Series. The Mariners have never been to a World Series. In a way, they’re so bad that they don’t even register on people’s lists of the most hapless franchises of all time. Without colossal heartbreak, it’s tough for people to realize you even have a pulse.

For the team’s first decade, there was nary a star to latch onto, with workmanlike first baseman Alvin Davis or indefatigable spitballer Gaylord Perry — who earned his 300th victory in the Kingdome — coming the closest. Then, in 1989, Ken Griffey Jr. came along.

The son and namesake of a championship-caliber outfielder, Griffey was the first pick in the 1987 draft. He made the majors by age 19 and was special from the get-go, batting .300 in his second season while winning the first of many Gold Gloves in center field. In 1997, he led the league in homers (57) and RBIs (147) and was named Most Valuable Player. The year after that, he equaled the prior season’s home run total.

If you were to boil down the relationships of the average Mariners fan to the team’s few-and-far-between stars over the years, you could say that Griffey was the shimmering first love who broke his heart; Randy Johnson was the girl from the wrong side of the tracks that he couldn’t take home to mom and dad; Edgar Martinez was his first wife; Ichiro Suzuki was a mysterious affair; and Felix Hernandez is being fitted for a ring as his second fiancée.

But whenever Griffey swings through town, Seattle still clears its schedule and books a hotel room, just in case. August 10, when Griffey is set to be inducted into the Mariners Hall of Fame (believe it or not, there actually is one), will be such a night. The question is: Does Griffey deserve such sunnily nostalgic treatment? The answer, as Fred Simmons would tell you, is “fuck no.”

In The Foot Fist Way, a direct antecedent of HBO’s Eastbound & Down, Fred Simmons (Danny McBride) is a cartoonishly overconfident taekwondo instructor in small-town North Carolina with a trophy wife named Suzie. While Fred was born to do one thing — taekwondo — Suzie is as aimless professionally as he is focused. A friend sets her up with a job as a dental assistant. During an office party, she gets “Myrtle Beach drunk” and cheats on Fred with her boss. When Fred discovers this, he flips out — and she moves out.

Suzie commences to continue her randy ways around the office, which Fred knows because he quietly stalks her in a very loud Ferrari. Eventually, she gets fired and comes back to him. Only she doesn’t quite beg for forgiveness; she just tells him she’s not herself without him, and he takes her back.

Shortly thereafter, Fred coaxes his “greatest hero,” Chuck “The Truck” Wallace, to perform a martial arts exhibition in front of his students. When The Truck hits town, Fred introduces him to Suzie. Once again, marital indiscretions ensue. Only this time, Fred refuses to give Suzie another shot.

In the Pacific Northwest, Griffey is Suzie, and Seattle is Fred. But unlike Fred, Seattle keeps taking Griffey back, no matter how many times he screws the city over.

The Mariners have but one true highlight in their entire sorry history. It happened in 1995, and it’s known as “The Double.”

Seattle was facing the Yankees in the decisive Game 5 of the ALDS, the first time the Mariners had ever made the postseason. That they’d gotten to that point was something of a miracle, as the Mariners had won consecutive games after digging themselves a 2-0 hole.

In the bottom of the 11th, the Mariners trailed the Yankees by a run. Joey Cora stood on third base with Griffey on first, representing the winning run. Martinez stepped up and whacked a line drive down the left-field line. Cora scored easily, but Griffey — who always looked like he was gliding rather than hustling — ran like a leopard was nipping at his heels, sliding safely into home before being swarmed by his teammates. It was a moment that should have been Martinez’s. But on the highlight reel, all you see is Griffey at the end.

After the ’99 season, Griffey, fresh off a 48–home run campaign, shocked Seattle by demanding a trade. The Mariners dealt Johnson the year before after refusing to meet his demands for a contract extension (he went on to win four Cy Youngs and a World Series — in 2001, no less — with Arizona), which clearly frustrated Griffey. But when he requested a trade — and his request was that he be traded to a specific team, Cincinnati, for which his father had played — he explained that he simply wanted to play closer to home. Home was in Florida. Cincinnati’s closer, but it ain’t that close.

In exchange for Griffey, the Mariners fetched his replacement in Mike Cameron, who went on to become a fan favorite despite glaring holes in his offensive game. And without Griffey (not to mention Johnson and Alex Rodriguez), the Mariners tied the league wins record in ’01. Griffey’s nine years in Cincy were respectable, but injuries prevented him from capturing the glory of his prime. Had he stayed healthy while employed in Ohio, it’s no stretch to surmise that he’d have threatened Hank Aaron’s drug-free career home run record. And had he remained in Seattle for the duration of his career — his dad, playing devil’s advocate when his son was mulling his trade demand, reportedly advised Junior, “They’ll never love you like in your first city” — he would have retired a beloved, monogamist legend, a Carl Yastrzemski for the Pacific Northwest.

Before the 2009 season, Griffey re-signed with the Mariners as a free agent, and his return to Safeco was a sight to behold. The crowd reaction was frenzied during pregame intros. There was no need for Griffey to apologize; his deigning to be there spoke volumes to Seattle fans.

Griffey pretty much sucked that year. He hit .214 with 19 homers, and his bat was noticeably slower. Had he retired right then, things would have ended amicably. But the Mariners grudgingly gave him a fresh deal when he insisted on playing another year. Sort of.

In 2010, Griffey was even worse. About 50 games into the season, he was hitting well below .200 when a report surfaced that he’d fallen asleep during a game. True or not, the mere airing of the rumor annoyed Griffey to the point where he retired — coldly, and without any sort of teary public announcement — before the All-Star break. The Mariners gave him an intentionally murky position with the organization to save face, but the damage was done.

Except with Griffey, the damage is never done. If he’s unwilling to crawl back into Mariner fans’ good graces, the team offers him a stroller — like the August 10 ceremony that will undoubtedly elicit another roar from his throng of jilted lovers.

Mike Seely (@mdseely) is the former editor of Seattle Weekly. He once covered America’s second-dumpiest horse track (Fairmount Park) for the Daily Racing Form, and is the author of Seattle’s Best Dive Bars: Drinking & Diving in the Emerald City.