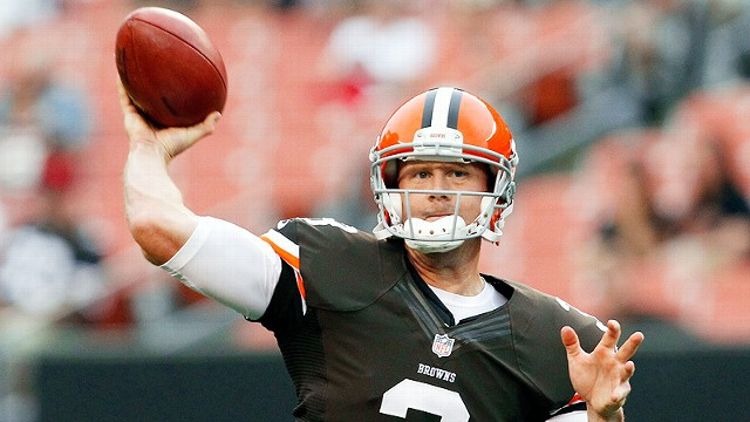 Brandon Weeden, starting quarterback for the Cleveland Browns, went 10-for-13 last night against the Rams. (Brian Hoyer was 10-for-14, but that is not the point.) Concerns about Weeden in Cleveland go back to the day he was drafted, when the Browns spent a first-round pick on a quarterback 5.5 years older than Andrew Luck. Those concerns persisted when Weeden finished 29th in DVOA among quarterbacks.

Weeden’s future in Cleveland — an organization with complete turnover at every level in the past 12 months and no loyalty to Weeden — is still tenuous, and preseason games are preseason games, but there were a few encouraging parts of Weeden’s night. At points last year, Weeden looked like the ultimate example of a quarterback who excelled in a quick-release college system but couldn’t navigate an NFL pass rush. Last night, Weeden stuck in the pocket and/or stepped up into throws on multiple occasions. It’s likely to be another disappointing year in Browns land (there’s little reason to think Cincinnati and Baltimore won’t both be on the cusp of the playoffs again), but improved play from Weeden would be a welcome start in the right direction. Also, let’s not forget that the last time Rob Chudzinski was in Cleveland, Derek Freaking Anderson went to the Pro Bowl.

With Michael Crabtree out for most of (if not the entire) season and Mario Manningham still on the PUP list, the 49ers are desperate for some help at wide receiver. Based on how much he played last night, it looks as if San Francisco is looking to A.J. Jenkins for some of it. Jenkins played a healthy amount last night but managed just one catch, after which he fumbled. “Uh, could have been better,” Jim Harbaugh said when asked about Jenkins’s night — that’s the sort of glowing recommendation you want for a first-round pick who plays a position of need. What I’m hoping to eventually take away from this is that Niners GM Trent Baalke and his crew do make mistakes, if not very often.

That’s really all I have to say here. Both the Titans’ offseason moves and the talk out of Tennessee is that there will be a renewed commitment to the running game there this year, and at the very least, they have a back capable of the sort of 58-yard touchdown Johnson had last night. The block from first-round pick Chance Warmack on the play was probably the highlight of the guard’s night. His first preseason game was a series of “Welcome to the NFL” moments, but I’m not sure anyone should be too worried.

That Sanzenbacher hauled in his 36-yard touchdown last night from John Skelton should be enough to show how far down he is on the Bengals depth chart, but combined with a 71-yard punt return and an injured Andrew Hawkins, Sanzenbacher’s performance against Atlanta may just be enough to get him a long look for a roster spot in Cincinnati. Sanzenbacher has spent the past two seasons buried on the Bears roster (which hasn’t exactly been flush with wide receiver talent).

5. The Ravens are still smarter than you

Baltimore won a Super Bowl and lost two Hall of Fame, franchise-icon defenders, and somehow they look better on that side of the ball. Daryl Smith, who has spent much of the past five years being one of the better linebackers in football before missing most of last season, looks like the next savvy Ozzie Newsome pickup after collecting five tackles last night. Chris Canty isn’t far down that list. He has played one sort-of game for the Ravens, and he has one sack. Matt Elam seems a proper Ed Reed replacement in plenty of ways, including his lack of desire to pay someone else to negotiate his contract.

When my Chicago Bears passed on Arthur Brown in this spring’s draft in favor of Jonathan Bostic, the worst possible scenario was for a team like the Ravens to end up with him. No one wants to see one of the smart teams take the player his team passed on, and again and again, the Ravens have proven to be one of those teams.

Kirk Cousins continued to ensure his role as the next backup quarterback who fetches a high draft pick with his performance against the Titans last night. Cousins went 6-for-7 with a touchdown in two drives (one of those completions led to Bernard Pollard’s first of what will likely be many, many personal fouls on the season) and looked generally in control of the Redskins’ offense. All the talk remains that Robert Griffin will be ready to go when Week 1 rolls around, but the situation with Cousins is now more about what Washington can get for him than what it can get out of him. At season’s end, when teams stuck in the quarterback middle are considering their futures, Cousins may look like a better option than some of the other unknowns.