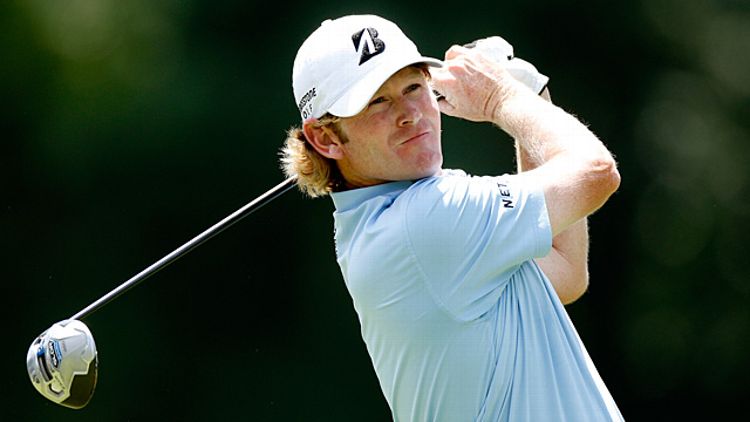 Every fan has his or her own rules for why they do or don’t root for certain athletes. Sometimes those rules are as simple as “he plays for the team in the town where I grew up.” Sometimes they’re less simple — as a kid, Joe Montana was my favorite NFL quarterback because he won Super Bowls, but also because we wore the same jersey number (16, though I was playing soccer) and his name was attached to the greatest football video game of my generation. (You can have your Maddens and your Tecmo Bowls. I’ll take my Sports Talk any day.) This is the logic of a 10-year-old boy, and thankfully it improves a little — though only a little — over time.

Take this weekend’s competitors at the golf season’s last major, the PGA Championship, for example. If you’re not a big fan of the sport, you might see an unbroken line of monochromatic stiffs. And you wouldn’t exactly be wrong. Yeah, OK, it’s an international field. And yeah, OK, Tiger Woods. But mostly: relatively well-off white guys from two-parent homes who, if they have a colorful personality, keep it fairly well-hidden on and off the course. Some sports almost demand of their players an easily tapped reservoir of childhood misery and pain in order to summon up enough anger and intensity to play. Golf is not one of them. It favors patience, and, above all, privilege.

Finding someone to root for in a sport like that can be hard. If I were still a 10-year-old boy with little understanding of the implications behind the words “cocktail waitress” or “former porn star,” the choice wouldn’t be as difficult. Tiger Woods is a god. Rickie Fowler wears flat-brimmed hats, peacock-bright Puma outfits, and drives a dirt bike. Bubba Watson bought the General Lee. (And his name is “Bubba”!) But when you’re 30 your standards change. And having watched and obsessed over the game for most of my life, but especially the past year, I can definitively say that if you’re having trouble looking for a golfer to root for, look no further than Brandt Snedeker.

Because it favors that privileged upbringing, what you might seek out first when looking for a golfer who’s easy to cheer for is someone with a deep self-awareness of that privilege. Snedeker has that. Earlier this year, the San Diego Union-Tribune published a story about the unlikely physical space that helped shape his early outlook on life.

His dad was a lawyer in Nashville. But when Snedeker was still a kid, his mom decided to do something very un-wife-of-a-lawyer-in-Nashville: She opened a pawn shop. Snedeker occasionally worked the counter at Pawns Unlimited, and, as the Union-Tribune put it, “watched couples trade in their wedding rings to pay the rent and single moms give up family heirlooms to keep the electricity running.” “People work their ass off to make a dollar,” he told the paper. “My dad always told us that we’re just one bad decision away from being on the other side of the counter.”

Last September Snedeker won more dollars in one day than anyone else had in the history of golf: $1.5 million for his Tour Championship win and a $10 million bonus for first in the FedEx Cup points race. For most of us, a huge cash windfall would mean a splurge on something. But according to the Union-Tribune piece, Snedeker insists that he still drives the same GMC Denali that he did when he first joined the tour seven years ago. (Though he did admit that it now has one less door handle than it did then.) He and his wife, Mandy, also set aside some of the money to start a foundation to help the kinds of kids whose parents he saw on the other side of that pawn counter.

That foundation is in Nashville, and it’s another mark in favor of Snedeker’s root-ability. It’s hard to say what percentage of PGA Tour players live in Florida, but the number has to be high. The advantages are obvious: year-round golf and no income tax. But Snedeker has talked often of how he’ll never leave his “Nashville bubble,” where he also attended college at Vanderbilt. Maybe you might knock a point or two off because his beloved hometown is also located in a state that doesn’t tax income. But it’s still rare to see a golfer — especially one of the top 10 players in the world — make the nostalgic, rather than practical, choice.

None of this would mean anything if Snedeker wasn’t also a great player. It’s not just that he’s great, though. He’s great in ways that mark him as different from other tour players. The most noticeable of those differences comes on the greens. Snedeker is often referred to as the “best putter in the world” (watch him enough and you’ll hear Johnny Miller say that word-for-word), and the numbers mostly back this up. Yet he excels at putting using a stroke that doesn’t look like any other on the tour. Today’s putting strokes are long and smooth, a reflection of the fact that today’s greens are manicured to roll as true as polished marble. Snedeker has a short, jabby stroke that looks a lot more like those of yore, when the surface of the tour’s greens would be more accurately compared to shag carpeting and a punchier stroke was needed just to get the ball to the hole.

That quick pop with his putter is a manifestation of Snedeker’s own jumpy personality, which features a refreshing lack of filter. Among its many problems, one of the PGA Tour’s biggest is its slow pace of play. Snedeker not only doesn’t contribute to that problem — he plays fast, even on the rare occasions when he’s four-putting — he’s also been unafraid to speak openly about it. Last November on the Golf Channel he referred to the issue and the PGA Tour’s handling of it as “pathetic.” He rightly pointed out that the tour’s policy of merely fining players a few thousand dollars for slow play wasn’t providing enough incentive to speed things up. His suggestion of docking them a stroke instead actually makes a lot of sense. And it probably hasn’t made him a ton of friends among those slower players, of whom he said “We all know who they are.”

For a quick-playing, quick-thinking, and quick-to-speak-his-mind athlete, it’s no surprise that Snedeker has an entertaining Twitter feed, too. It’s is a mix of the personal and professional. (And yes, like all other Twitter feeds, the boring and banal.) He’ll tweet about his losing battle with the family of raccoons that lives in his backyard and the often frequent losses of his beloved Vanderbilt teams. But he also occasionally uses the feed to speak out, at least in relative terms considering the normal outspokenness of the average PGA Tour player.

On Wednesday, the USGA announced a surprising new long-term deal with Fox Sports that will take away the U.S. Open and a few other prominent tournaments from their normal home at NBC. Though they’re often conflated, the USGA and the PGA, which runs this weekend’s championship, are two different and competing organizations. The news, and especially the timing of its release, rankled a few, especially the PGA, which released a passive-aggressive statement. But Snedeker was the only player to take to his Twitter feed and make a statement of his own, one that was a lot more direct, calling the announcement “petty.”

Of all the things we want from our athletes, it’s this willingness to speak and act openly and genuinely that seems to be close to the top of the list. Though it’s childish to think that the person we see in public is always that same way in private, it’s nonetheless part of the reason why Tiger Woods’s dirty text messages made an already bad sex scandal even worse. Snedeker appears, at least for now, to be that same guy both on and off the course. An upcoming issue of Golf Digest features a list of the tour’s 30 top “good guys” as voted on by “tournament directors, locker-room attendants, players, caddies, media members, golf executives and tournament volunteers.” In short, the magazine wanted to see if the perception matched the reality by finding people who could speak to how players acted when they weren’t on camera. Out of the 200 or so players who compete regularly on the tour, Snedeker came in second. (Steve Stricker is no. 1.)

Of course, as fans we also want something close to the opposite of humility and genuineness when our favorite athletes are competing. The very vivid term used to describe the hyper-competitiveness we hope to see in our more famous, more athletic avatars is “willing to step on their necks.” It’s not really a phrase meant for a contact-free sport like golf. Yet Snedeker in the past has shown that he has that elusive thing we seem to want: an ability to lose gracefully while also being devastated by the loss. Witness him at the press conference following a close but ultimately unsuccessful run at the Masters in 2008.

If this is what you need most from your favorite golfer, however, it’s possible Snedeker actually isn’t right for you, at least anymore. Since this video was shot he’s had two kids and has talked frequently about how their births have given him the kind of perspective that would make this sort of emotional display less likely. It’s the same kind of “my family is everything” outlook that, hysterically, actually earned Phil Mickelson criticism when he hadn’t yet won a major. Don’t be surprised if the same thing happens to Snedeker if his turn atop golf’s mountaintop doesn’t come for a while, as it looks likely that it won’t this week in Rochester, New York, where he’s struggling to make the cut.

If, however, the previous arguments have yet to persuade you that Snedeker should be your favorite golfer, let me offer up one more data point that might appeal both to you and the 10-year-old boy or girl you used to be. In March, Snedeker finally found an explanation for a nagging injury that had bothered him his whole life. Doctors diagnosed him with “low bone turnover,” a lack of regenerative ability that had caused him to break four ribs in six years. It isn’t quite kryptonite, and Snedeker certainly isn’t Superman. But for those of us who did or still do love comic books, it’s not hard to recognize a good superhero origin story when we see one.