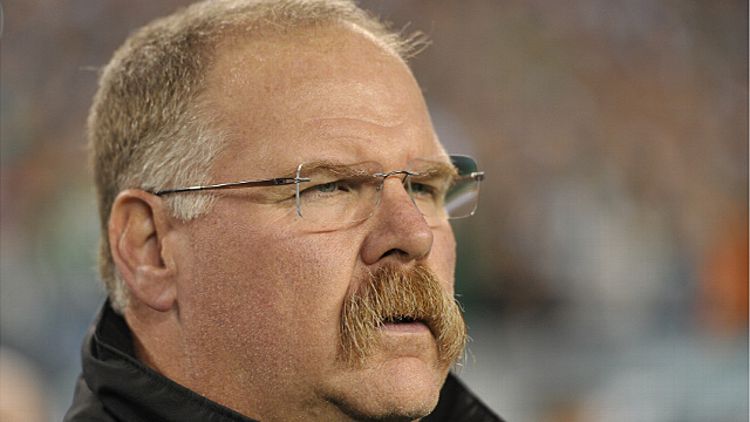 Chris Ryan: Andy, we now interrupt our decade-long reenactment of the gas station scene from No Country for Old Men — wherein we are the old man behind the counter and life is played by Javier Bardem, who tells us to call it in the air before it shoots us in the head with a captive bolt pistol — to talk about Andy Reid, the Philadelphia Eagles, and personal accountability.

Look, I admire taking responsibility for a mistake as much as the next guy who may or may not have knocked the side mirror off a Volvo in a Grand Union parking lot in Waitsfield, Vermont, in 1992 with his mother’s Toyota Corolla and not left a note. Hypothetically. I think it was General George Custer who once said, “Oof, my bad, dog. This one is on me.” But is there a point where taking an L actually … shirks responsibility? Is saying something is your fault actually different from taking the blame?


I’m, of course, talking about Andy Reid, Andy Greenwald. Here we are in 2013. Everything is changing. Dudes jumping from space. But when I look into my Moleskine, decorated with yellowing newspaper headlines espousing the glories of Jerome Brown, I see the words “This is my constant” accompanied by a poorly rendered, ball-point pen sketch of longtime Eagles coach Andy Reid, standing in front of a microphone, apologizing.

The latest thing that Andy Reid is sorry for is Juan Castillo. In February 2011, Reid replaced defensive coordinator Sean McDermott with Castillo, then his offensive line coach. Was Juan the right man for the job? Well, he sure got up early in the morning. The worst thing you can say about a defensive coordinator is that his defense doesn’t look coordinated; that they look disjointed and unable to make adjustments during the course of a game. It was this last problem that cornerback Nnamdi Asomugha called out to the media after the Eagles’ meltdown of a loss to the Detroit Lions. “There wasn’t a great change of scheme on what we did in the first three quarters.” That was Sunday. On Tuesday, Reid fired Castillo. “I put Juan in this situation and things didn’t work out as I’d hoped … I take full responsibility for putting him in that situation … Offense, defense, and special teams right now, we need to get better, and I’m going to continue to work through that and it’s my responsibility to do that.”

It’s hard to pile on and make jokes about Castillo and Reid when you watch this video of the now ex-DC choking up while talking about letting down the city of Philadelphia and still being willing to take a bullet for Andy Reid, despite getting the pink slip. And I harbor no ill will toward Reid. The father-son relationship between him and Michael Vick, and more specifically — and I am saying this with a completely straight face — Reid’s investment in Vick’s rehabilitation as a player and a person, is, to me (duh) one of the more meaningful things that have happened in sports in the past five years. I believe in second (and third and fourth) chances. But I don’t believe in Andy Reid anymore.

Here’s why: I have been listening to Andy Reid take responsibility and apologize for being Andy Reid for what feels like much longer than the 13-plus years he has been in charge. Every time the Eagles put on a sputtering, 12-point performance against lesser opposition, every time his offense ran a play on third down, seemingly designed to gain five yards when eight were needed. Every time Donovan McNabb apparently thought his wide receiver’s feet were actually his hands. He’s taken responsibility: for Dominique Rodgers-Cromartie’s total lack of interest in making any kind of tackle other than a kill shot, for Jason Babin’s armband tats, for Danny Watkins being new to the game of football, and everything in between. And the thing is, I would be fine with everything that is going wrong with this football team; they’re mediocre. There are mediocre teams. Just because I’m from Philadelphia doesn’t mean I drink battery acid and light trash on fire every time the sports club I cheer for hovers around .500. And that’s what this team is, Andy. They’re .500. 11-11 in their last 22 games.

What I want is for Andy Reid to free himself from giving a shit what his players and city and media think of him. On Tuesday, I wanted him to come out shirtless, acting like the bastard child of Ric Flair and Tupac, screaming, “This is the house Buddy Ryan built. Our D does not know what they are doing, hence I am firing the D coordinator. I brought Juan Castillo into this world and I will take him out and I am the walrus and you can salute me or shoot me, at me or dap me. I have been to five NFC championships and one Super Bowl. If you don’t like it, I can go get that Shahid Khan money next year. Todd Bowles calls the D now. Andy Reid, OUT.” You cannot throw yourself in front of something if that something was always meant to run you right over. The press don’t walk into the media room after a game wondering whose fault a loss was. They know! Andy Reid taking responsibility, so abruptly, without any display of emotion or even variation of syntax … it’s letting himself off the hook. It’s deflecting responsibility onto … no one! Chris Ryan, out!

Andy Greenwald: Chris, like all Eagles fans, recovering and otherwise, my first thought when I heard the news about Juan Castillo’s firing was: It’s about time. From the moment it was announced last season, Andy Reid’s ill-advised transformation of a competent offensive line coach into a woefully overmatched defensive coordinator was rightly ridiculed; it was a staggering act of hubris, a blinkered know-it-all dick-grab akin to Francis Coppola casting his teenage daughter in Godfather III — except I have every reason to believe Sofia has a better understanding of the weakside blitz. Who can forget Asante Samuel’s memorably supportive quote when informed of the surprise move by a journalist: “The offensive line coach?” The current Atlanta Falcon CB was then tackled by a fit of giggles. (Asante never much liked contact.)

But it’s also about time in the sense that everything concerning the endless, grinding psychodrama of Reid’s reign of errors has been about time. A baker’s dozen worth of years — thanks to Reid, I’m imagining stale Krispy Kremes — tossed into the turf like an errant pass from Donovan McNabb; of endless Sundays lost in dank sports bars while the Eagles played down to the competition (when you have to come from behind to beat the Browns by one, the only losers are the fans), hoping the beer would somehow make cheering for Torrance Small more palatable; all the while the joyful sound of other, fiery fan bases — the expansively lagered Pittsburghers, say, or the clinical vodka-sipping Patriot posse — ringing in our primed-for-defeat ears. In the last decade, Chris, I spent more weekends in the company of you and David Akers than I did with my own wife.

Time has always been Andy Reid’s greatest ally — after all, how can a man be fired for his record when he’s always rebuilding? — and his worst foe. The stories of his clock mismanagement are epic and legion. Even a stopped watch is right twice a day, but only Andy Reid would burn a T.O. trying to verify it. There’s a touching anecdote about how Juan Castillo first got his liege’s attention was by showing up early, every day, whether he was wanted or not. Perhaps Reid saw in the younger man a timeliness he could aspire to, or maybe he just wanted a dependable alarm that came with a wife and kids, not a snooze button. Either way, the loyalty and affection between the two was warm and real and it’s going to wind up costing both of them their jobs.

Yet time is not something I had much of for those who hated Reid from the beginning, the chattering cheesesteak eaters who claimed the coach’s Mormon-influenced calm and Mussolini-like devotion to binders and spreadsheets were anathema in an emotional city fueled primarily by Yuengling and resentment. As Philadelphia Inquirer columnist Sam Donellon put it after this past weekend’s debacle, in which Castillo’s defense made the woeful Detroit Lions look like the same cats who once ate dudes like Russell Crowe for lunch [Editor’s note: Apparently Greenwald saw a different version of Gladiator than the rest of us], the early, promising Reid years were populated by players as buttoned-up as their head coach. There was no better avatar for Reid’s smarter-than-you-but-not-smart-enough style than the underrated and underappreciated soup salesman Donovan McNabb, a consummate pro and team player, even though the other players on his team were always trying to throw him under the bus.

In our hot-headed city, there was, for a time, an admirable sense that the mustachioed mass on the sidelines could absorb the slings and arrows of drive-time jocks with his implacable bulk, protecting his players and letting them focus on “gold standard” results on the field. Not even the red meat/raging heartburn Buddy Ryan seasons could match up with the golden years of 2001-04, when the Eagles were ascendent and winning no longer seemed like something reserved for other cities, those exotic hamlets where people call them sprinkles instead of jimmies.

But all that time in charge has taught us a lot of things, not the least of which is that the real key to Reid’s early successes was the suffocating defense drawn up by Jim Johnson, an Illinois native who couldn’t have been more beloved in Philly if he’d been born in the back of the Bortondale DMV. If Reid and McNabb provided the equanimity, Johnson and especially Brian Dawkins provided the necessary napalm. Losing the former to cancer and the latter to free agency — helpful advice: Even if you’re an organ donor, you don’t willingly offer up your heart to someone in need of a transplant, especially while it’s still beating — presaged all the losing to come. The problem with the 2012 team isn’t that they’re loose with the ball or sloppy without it, it’s that they make watching football as excruciating as a root canal.

Chris, I hear what you’re saying about Reid’s personal character and I mostly agree with you. I’d much rather cheer for an exciting redemption story like Michael Vick than a thick-necked soul patch like Kevin Kolb, even if Vick seems to prefer throwing touchdowns to the other team. But here’s the thing: For the past few seasons, untethered by general managers, reason or logic, Andy Reid has been running this team exactly like the swaggering ur-walrus you’re describing, resulting in a parade of blame-shifting press conferences, tackle-missing draft busts, and a joyless, suffocating mediocrity. The line between hard-nosed leadership and foolish obstinacy is a tough one to locate. It’s probably about the same as the boundary between perpetually not good enough and simply not good. “The time’s yours,” is Reid’s favorite thing to say when offering up his own considerable hide to be roasted by the local media. In retrospect, time is the one thing Andy Reid should have been less generous with. Because, after this week, it’s clear he’s run out of it.