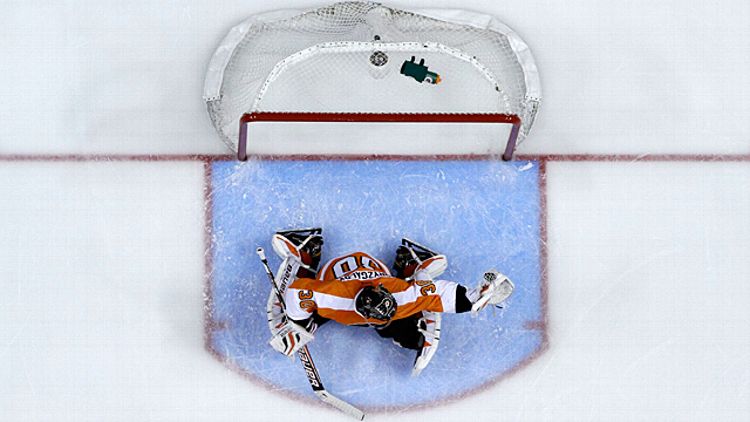 Why You Hefta Be Bad?

A team that has already spent the season giving the league so much — automatic wins, crazy trade rumors, doughnut-based media scandals — topped itself this weekend when it brought Ilya Bryzgalov back to the NHL.

The Oilers agreed to terms with the free-agent goaltender Friday, signing him to a one-year deal worth $2 million. He’ll spend some time in the AHL on a conditioning assignment, then join the Oilers to compete with Devan Dubnyk for the starting job.

While Bryzgalov’s high-priced stint in Philadelphia was a disaster, he’s still one of the league’s most entertaining characters. He also has some history in Edmonton. His infamous “Why you hefta be mad?” monologue was directed at Oiler fans booing Chris Pronger, and he also referred to Edmonton as the North Pole. He clarified that latter remark over the weekend.

Dubnyk has taken much of the blame from Edmonton fans outraged at yet another lost season (the Oilers are already 14 points out of a playoff spot), and he certainly deserves his share based on an ugly stat line. His 3.92 goals-against average and .876 save percentage both rank toward the bottom of the league. And while it’s true that all goalies go through bad stretches, at some point the Oilers were going to have to make a change. If anything, bringing in a capable veteran free agent was probably a smarter strategy than trading away young players in a panic move.

That’s not to say the Bryzgalov signing didn’t cost the Oilers anything, because it did. In order to free up the money to make the deal, Edmonton was forced to move veteran defenseman Ladislav Smid to the Flames for a pair of middling prospects. (There have also been persistent rumors of a pending deal to send Ales Hemsky to the Flyers, but it has yet to happen.)

The Smid deal becomes part of a trivia question, marking only the second time in history that the Battle of Alberta rivals have made a trade with each other. More importantly: Smid was acquired seven years ago as the key prospect in the Pronger trade, which serves as a painful reminder for Oiler fans of just how long this perpetual rebuild is taking.

As for the action on the ice, it was more of the same for the Oilers. They lost to the Flyers on Saturday and the Blackhawks on Sunday, and now sit in the 29th spot in the league.

The Cup Contender in the League’s Best Division? You’ll Have to Be More Pacific.

Even with the Oilers dragging down the property values, the Pacific has been the league’s strongest division. And with so much attention focused on the dominant Sharks and Ducks, and even the surprising Coyotes, it’s easy to forget that the 2012 champs are still lurking.

The Los Angeles Kings are 11-6-0 for 22 points. In most seasons, that kind of start would have a team locked solidly into a playoff spot. But in this year’s Western Conference, it has the Kings on the outside looking in, two points back of the final wild-card spot.

If there has been a weakness so far, it may be goaltending. That’s a surprising statement for a team that employs one of the league’s better goalies in Jonathan Quick, and his 2.38 GAA looks good. But that’s largely a factor of how few shots the Kings allow; Quick’s .906 save percentage ranks just 37th among the 48 goalies who’ve played at least five games. It could just be a slow start, but the numbers are actually fairly consistent with what he did during last year’s shortened season. With Quick only in Year 1 of his 10-year extension, it’s a situation worth watching for Kings fans.

Quick looked just fine Saturday night, making 25 saves to help the Kings roll over the Canucks 5-1. Los Angeles got three-point nights from Mike Richards and Tyler Toffoli, and used a three-goal outburst over a 2:33 stretch in the second to chase Roberto Luongo and put the Canucks away. It was a reminder of just how good the Kings can be, and a potential warning to the teams ahead of them in the Western playoff race.

This week, the Kings head out for a four-game road trip against Eastern Conference teams; they’ll face the Sabres, Islanders, Devils, and Rangers. In that group, only the Rangers are above .500, so it could be an opportunity for the Kings to rack up seven or eight points.

The way the Pacific is going, they might need that much just to keep pace.

Beasts of the Least

If you’ve stopped paying attention to the East (and nobody could blame you if you have), you might be surprised to hear who’s currently leading the conference. It’s not the Penguins any more, thanks to a two-game losing streak. And it’s not the Maple Leafs, Bruins, or Red Wings, the Atlantic’s three most-hyped teams.

No, by the end of the weekend it was the Tampa Bay Lightning who found themselves all alone at the top of the East. They’ve built that lead with a four-game winning streak that continued with a 3-2 overtime win over the Wings on Saturday. It’s already their third win streak of three or more games this season, and they’ve yet to lose two in a row.

We always knew the Lightning could score, and they have. Their offense leads the conference in goals per game, powered by another solid year from the ageless Martin St. Louis and a Steven Stamkos season that should start generating Hart Trophy buzz any day now.

But much of the Lightning’s problems in recent years has come down to inconsistent goaltending, and they went into this year without a clear starter. Instead, they hoped that either Ben Bishop or Anders Lindback would emerge, and Bishop has done exactly that, posting a 2.12 GAA and .927 save percentage. (Lindback, meanwhile, has struggled badly.)

Whether the inexperienced Bishop can keep it up remains to be seen. His next game for the Lightning will be his 14th this year, the most he has ever played for an NHL team in a single season. In fairness, that’s largely been due to the bad luck of being stuck behind better goalies wherever he’s been, and that doesn’t seem like it’s going to be an issue this year in Tampa Bay.

The Lightning will look to continue their hot streak Monday afternoon against the Bruins. It’s the third matchup of the season between the new division rivals, and Boston has already handed Tampa Bay two of their four losses, outscoring them 8-1 in those games.

One side note: The Lightning’s status as the East’s top team has been a nice story, but it highlights the increasingly embarrassing gap between the conferences. If they were in the West, Tampa Bay’s 24 points would only be good enough to have them tied for the final playoff spot.

• The Panthers fired head coach Kevin Dineen and his assistants Friday, giving the job to AHL coach Peter Horachek on an interim basis. The move came with the team having lost seven straight; they have since extended that streak to nine.

• The Ducks are on top of the overall standings with 29 points after recording their fifth straight win Sunday against the Canucks. Can they extend their streak to six? Spoiler alert: Yes, because their next game is Tuesday night against the Panthers.

• No team had an uglier weekend that the Predators, who dropped a pair of 5-0 decisions to the Jets and Devils and are now six points out of a playoff spot.

• The Islanders lost in Columbus and Montreal over the weekend, and have now been beaten in four straight. That’s dropped them down to sixth in the Metro, and out of the Eastern playoff picture.

• The once unbeatable Sharks suddenly look very vulnerable, losing five straight after Sunday night’s 5-4 shootout loss to the Jets. San Jose has now dropped all the way to third in the Pacific, six points back of the Ducks.

• The Rangers have climbed over .500 for the first time, thanks to a three-game winning streak. They beat the Panthers, 4-3, on Sunday and would be the Metro’s third playoff team if the postseason started today.

• The Blackhawks and Avalanche continue to share first place in the Central (though Colorado owns two games in hand). While the Blackhawks were beating Edmonton on Sunday night, the Avs kept pace with a 4-1 win over the Capitals.

• That made it two straight weekend losses for the Canucks, a disappointing follow-up to last week’s impressive win over the Sharks. They’ll return home for a six-game homestand that starts with Thursday’s rematch with San Jose.

• Finally, Friday night’s 2-1 Leafs’ shootout win over New Jersey didn’t provide much in the way of entertainment, but it did feature an early candidate for goal of the year: Phil Kessel went blue line to blue line to blue line before splitting two Devils and beating Cory Schneider. Bonus points for the “eh, no big deal” celebration.