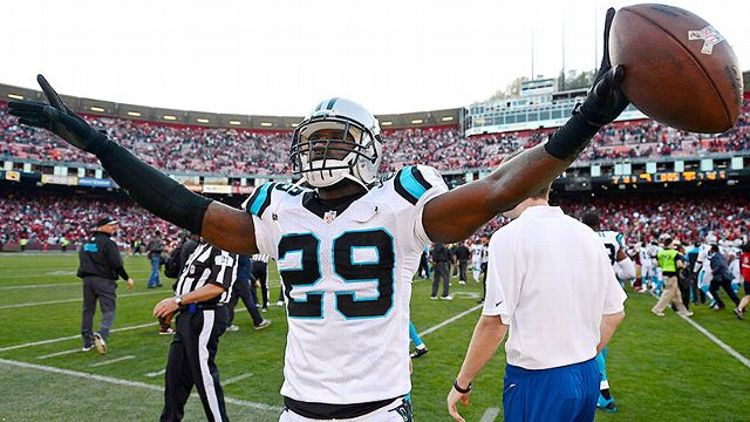 You’re Going to Hear Them Roar

Chris Ryan What’s the elevator pitch on the Chiefs? How do you sell someone who isn’t already a fan on Alex Smith and Andy Reid? What’s a signature win they’ve had this season you could talk about in detail? I’ll wait … except no I won’t, I’m getting off the elevator and I’m going to put together the new movie Star Wars vs. Jason Bourne because I make deals, and you are going back to the mailroom with Dexter McCluster on your fantasy team.

No, we’ve been patiently waiting for a breakout team this season. And on Sunday, we finally got one. We’ve been waiting for Cam Newton to stamp this breakout season with a signature win, and on Sunday he put one to his name — maybe not with numbers (169 yards in the air, one pick), but with “they will fear you” bullets to Steve Smith. He made the kind of throws only he could make, in San Francisco, on national television.

Now we’ve got a team that’s won five in a row, is looking to break up the Saints/Falcons NFC South duopoly, and is playing like a team nobody would want to see in the playoffs. They’ve got an absolute rock star on defense in Luke Kuechly, the quarterback of the future who looked like he was being relegated to the trash heap (Newton), a folk hero wide receiver (Smith), a cool nickname for their coach (“Riverboat” Ron!), and a bunch of chippy, hard-hitting guys on defense, saying all the right things after games. Post-Niners, veteran defensive end Charles Johnson said, “We don’t need no bandwagon.” Too bad. It’s too late.

The Seahawks and Saints and Everybody Else

Andrew Sharp: The Seahawks went to Atlanta on Sunday. Their defense was ruthless as usual, Russell Wilson threw for 287 yards, and Marshawn Lynch ran over people in between the passes. After two weeks of squeaking past terrible teams, it was 23-3 by halftime. The Falcons were helpless. Also: While we wait for Percy Harvin to come back, we have Golden Tate highlights to hold us over.

It’s hard to pick anyone else as the most impressive team in football.

But then, fast-forward six hours or so, and the Saints disemboweled the Cowboys, reminding everyone else that one team out there is every bit as ridiculous as Seattle. The defense in New Orleans looks better than ever, and with Brees and Graham and Colston and Sproles on offense, they’re unfair all over the field. (Imagine trying to cover Jimmy Graham and Marques Colston and somehow stop this, too.)

The Saints play the Niners next week, and they’ve got two games with the Panthers in December, and there are probably four or five teams that still have a realistic shot at stealing the NFC this year. But when everyone’s at their best, nobody else has been half as impressive as the Saints and Seahawks. When they finally play each other, it could go a long way toward deciding the home-field advantage that’s crucial for both of them. And we’re only three weeks away now. Saints at Seahawks on Monday night after Thanksgiving. What I’m saying is, Sunday gave us another reminder to appreciate the two best teams in the NFC — and probably the whole league — but mostly it just reminded me how awesome that Monday night game will be.

Sharp: After a frustrating two months wondering when Tavon Austin was going to start being awesome, Sunday was the answer. There were a lot of reasons to love him on Sunday. It was the first time this year we got to see him be the real, deadly weapon the Rams drafted in the top 10. It was also the first time the Rams did that thing you do in video games when you’ve got the fastest player on the either team — just run a shallow drag route across the entire field, then watch him get open and take it 80 yards himself. Also, he did the Terio dance after his third touchdown, joining Ravens kicker Justin Tucker to prove Terio really is uniting us all to kill 'em together (ooooh).

But mostly, that punt return. Going backward to grab a football off the bounce is much harder than it looks, and doing it on the 2-yard line seemed pretty irresponsible, but he made it look easy, then exploded down the sideline and made everyone else on the field look like they were going half-speed. Conventional rules were rendered irrelevant.

That’s the Tavon Austin we’ve been waiting for.

The Spectrum of Human Emotion

Shea Serrano: There have been bad spots before. There was the time in 2002 during the Texans’ inaugural season when the winless Bengals came wandering into Houston for a game. It was the first time in franchise history that the Texans were actually favored to win. They lost 38-3. There was the time in 2008 when the Texans were winning by 17 against the hated division rival Colts with less than eight minutes to play. They somehow ended up having to watch Peyton Manning and his head kneel out the last seconds of the game for an Indy victory. There was the time in 2010 on Monday Night Football when Matt Schaub, first beginning to get creative in thinking up clever new ways to lose, rallied his team back from a three-touchdown, second-half deficit (which included an end-of-the-game two-point conversion, mind you) only to throw a HAHAHAHA GTFOH pick-six to end the night on the Texans’ first series in overtime.

There was the time in 2010 when the Jaguars completed a ridiculous Hail Mary pass in the final seconds of the game to win it. There was the time in 2011 when the Texans, playing against the Manning-less 1-13 Indianapolis Colts for a chance at a first-round playoff bye, lost in the last 30 seconds of the game when a guy the Colts had pulled down from the stands during the second quarter to play quarterback threw a touchdown to Reggie Wayne. There was the time in 2011 in the playoffs when Jacoby Jones helped the Ravens beat the Texans, and that was great for them, except that was back when Jones still played for the Texans. So on and so on and so on. There are a billion of them.

But still, never before has it been this black in Football, Texas. Never before has it been this cold. Never before have things seemed so hapless/hopeless/happyless. The only light in the city is coming from the flaming pitchforks and fiery buttholes of the Texans’ fan base. The Texans have lost seven consecutive games, which is a thing that has never ever EVER happened to them before. Their second-best defensive player broke his leg earlier this season (that happens quite a lot, actually). Their quarterback set an NFL record for pick-sixes and then promptly let his brain melt out of his nose and his heart melt out of his you-know-what.

This is awful, this is terrible, this is the worst thing.

The Texans are never going to win another football game for as long as I live, I just know it.

At Least They Still Have Him

The Price of Toughness

Robert Mays: Watching Jay Cutler play football yesterday meant twisting my face into one continuous cringe. When Cutler tore his groin in Washington three weeks ago, the original prognosis was that he’d miss at least a month, but come yesterday afternoon, there was Cutler, under center for the Bears. It started well enough. He completed seven of his first 10 passes, and although he clearly didn’t have the sneaky burst that has always been a significant piece of his game, he was moving well enough to justify Marc Trestman’s decision to trot him out there.

Then the hits started coming. Cutler was sacked only twice yesterday, but he was knocked down 11 times. In the second half, it seemed like every dropback ended with Cutler pushing himself off the turf, and each time, he’d come up hobbling, his hand reaching for the area just below his left hip.

Seeing Cutler play through what was obviously a considerable amount of pain brought a collection of conflicting feelings. There will always be something about seeing the leader of any team willing to play hurt, and as Cutler limped around the field, Brandon Marshall’s assurance that his quarterback would only miss one game started to make a lot of sense.

See, despite one very public incident to the contrary, Cutler is — and has been — a remarkably tough dude. Few people who saw him in a hat on the sideline of that NFC Championship Game also watched him pick grass out of his helmet for four consecutive seasons. Cutler took a beating yesterday, but it never approached some of the more severe ones he has gotten during his time in Chicago.

At a certain point, though, the admiration of someone’s heart, toughness, whatever, starts losing out to logic. If this were 2011, and a Cutler-less Bears offense meant Caleb Hanie and Mike Martz, I’d be fine with propping Cutler up Weekend at Bernie’s style in the shotgun. But this is 2013, and the Bears have a team and an offense lined with talent on which they depend for wins. In a game and a half, it was clear that with Alshon Jeffery, Marshall, and Matt Forte, Josh McCown and Trestman were more than capable. The Bears didn’t need Cutler yesterday, and when Cutler’s ankle injury (one I can almost guarantee he wouldn’t have sustained if he’d been more mobile) forced McCown in for Chicago’s last drive, I got the feeling that if he’d started from the first snap, the Bears might be 6-3 and sitting atop the NFC North.

I don’t fault Cutler, or Trestman, or anyone else involved with the decision. There are several factors at play here, and I’m sure each played a small part in the choice that was made. Cutler is playing for a contract, and for both him and the Bears, him being on the field is a necessary part of evaluating whether he’s worth one. There’s also that lingering memory of the NFC Championship Game, which, consciously or not, probably played some part in Cutler’s desire to play. I guess what I’m saying is that I don’t know if the right or wrong choice was made, and I don’t know whether given the same options again, if that choice should have been different. What I do know is that the Bears and their quarterback left the field yesterday beaten and bruised, and it feels like this season is starting to slip away.