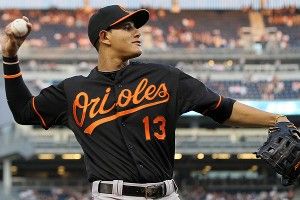 Fewer than 20 games left! The mid-September crunch is here, and woe to those who stumble.

Five quick facts about the Philadelphia Phillies, who seemed to concede the season at the end of July when they dealt Shane Victorino, Hunter Pence, and Joe Blanton to West Coast contenders: One, they’ve now won seven of eight games, and 15 of their last 20. Two, they’re somehow just four games behind St. Louis (with Pittsburgh and L.A. sandwiched between) for the last wild-card spot. Three, their best pitchers are named Cole Hamels, Roy Halladay, and Cliff Lee. Four, they have six games coming up against the Astros and Mets. Five … my God, this could really happen.

Felix Hernandez had this one in the bag, but he’s blown it with three sub-par starts in a row. He’s now lost six straight September starts dating back to last season, which is bizarre for a pitcher of his caliber. Because of the downswing, which has seen his ERA go up by almost half a run to 2.91, the door is now wide open for the other contenders. Justin Verlander is the leading candidate, with his league-leading 5.8 Wins Above Replacement and his 212 strikeouts (second only to teammate Max Scherzer’s 220, who needs to do Justin a solid and chill out over the last few games). He’ll pitch tonight against the Indians, while White Sox ace Chris Sale takes on the slowly Twins, and the Rays’ David Price faces CC Sabathia and the Yankees.

Price has the best record of the bunch at 17-5, and the league’s lowest ERA at 2.54. His path to the trophy remains the same — reach 20 wins, lead the Rays to the playoffs. Sale has the jack-of-all-trades/master-of-none conundrum working against him; he’s got a good ERA (2.88), a good strikeout rate, and a good record (16-6), but isn’t the best in any one category. All three of them need to watch their backs, because Jered Weaver just pitched himself back into the race with a seven-inning, two-hit gem against the Angels on Thursday. He’s now tied with Price at 17 wins, and dangerously close in ERA at 2.74. His strikeout rate is very low by comparison, and his metrics don’t quite measure up, but that might not matter if he can pull off the Price formula of reaching 20 wins and making the playoffs. This is a huge, huge weekend in the race.

We’re well into the Enlightened Era, when writers and pundits and voters and fans understand the futility of measuring a pitcher’s worth by wins alone. But even in this new golden age, there’s still something magical about 20 wins. Call me old-fashioned, but I can’t help succumbing to the allure of 20. I have a feeling pitchers feel the same way, despite the fact that there are a million elements out of their control that dictate whether they make it or not. I still remember the last start of Mike Mussina’s career in 2008, when he was trying to get that 20th win for the first time in his career. He’d reached 19 twice and 18 three times, and that had to drive him nuts.

The game was at Fenway, number 161 for both teams, and Mussina was strong from the start. The Yankees finally scored three runs for him in the fourth, and he left the game up 3-0 after six great innings. Then, in the bottom of the eighth, the Red Sox rallied. If they scored three runs, the win would be null. Pedroia hit a line drive to left that made it 3-2, and then Girardi called on Mariano Rivera an inning early to get Juan Miranda. The Yanks were already out of the playoffs for the first time in years, and the game was meaningless from a standings perspective. But that’s how big the 20th win had become. River did the job, the Yanks added some insurance, and Mussina finished the season 20-9. It’s probably a little stupid that it was such a big deal, but it mattered anyway. And it matters to Gio Gonazalez too.

Since his transition from reliever to starter in late July, Kris Medlen has quietly become the best pitcher in baseball. The numbers are so gaudy that they’re almost unbelievable: Five earned runs in 55.2 innings, a 7-0 record with a 0.81 ERA, 53 strikeouts to just seven walks, a .203 opponent batting average, and just two home runs allowed. If anyone put up those kind of numbers over an entire season, well … it’s unthinkable, actually, because nobody has ever had a year that good in the modern era. But Medlen has been lights-out, and his emergence comes at a great time for a Braves team who will likely need to win a one-game wild-card playoff in about three weeks. In just two months, Medlen has almost certainly nabbed that role from Tim Hudson, and he’ll get a taste of playoff-caliber baseball Friday against Ross Detwiler and the Nationals.

Yeah, I know, this made the list last week, too, but come on, it’s a fantastic story. Braun has distanced himself from the field in the National League, and would be the undisputed MVP if he were anyone but Ryan Braun. Unfortunately for him, he happens to be Ryan Braun, the guy who failed a PED test, got suspended, and then went free on a technicality. He’s been branded a cheater in our hearts and minds, and he can’t possibly win the MVP. Right? But with 38 home runs, 100 RBI, a .310/.385/.593 line, and better metrics than anybody else, there’s not much of a case against him. It’s an awkward situation all around, and I’m loving it. Ford Frick needs to come back from the dead and put an asterisk in the record book next to the MVP that David Wright or Andrew McCutchen eventually win this year.

5. All Hail the Second Wild Card

This is the greatest development in baseball since the curve ball was discovered. Do you realize that without the second WC (let’s call it 2WC, just to sound cool), there would be literally no drama in the National League? Nationals, Reds, and Giants would be runaway divisional winners, and the Braves would take the wild card with ease. But now? Oh man, now it’s exciting. I mentioned the Phillies, but how about Milwaukee sneaking up on St. Louis? Or the Pirates desperately clinging to a faint hope, or the Dodgers struggling to catch the Cardinals and justify the trade to end all trades? Then there’s the American League, where the Angels and Rays are trying to sneak into the last spot, the Yankees are praying for an end to their free fall, and the loser of the AL Central race will have to finish on a tear to catch up with the Orioles or A’s. This single little change has made the playoff chase a thing of beauty, and that’s before we even get to the dramatic one-game playoffs. 2WC is the best, and the madness has just begun.

The Dodgers are in the middle of a slow nightmare, but they couldn’t ask for a better opportunity to turn things around. St. Louis is the leader of the 2WC pack, but a clean sweep for the Dodgers would put them on top instead. But that knife cuts both ways. When they took on the Giants last weekend, I said that while the Dodgers couldn’t win the division in those three games, they could certainly lose it. The same applies here- the wild card can’t be won, but it can definitely be lost.

With a series split against the Orioles and a win against the Red Sox, the Yankees have stopped the intense bleeding of August and early September. But it doesn’t get any easier; now the Rays come into the Bronx after three straight losses to the team I’m officially calling The Goddamned O’s. The last two losses came by a run apiece, and the Rays can’t afford to lose another series as they try to catch New York/Oakland/The Goddamned O’s. It’s Price vs. Sabathia tonight, Shields vs. Nova (making his first start since August 21) on Saturday, and a resurgent Matt Moore, a.k.a. Death to Lefties, against Kuroda on Sunday. It looks favorable for the Rays on paper, and if the Yankees can’t steal a win or two, it could be the last stage of a long decline.

The two hottest teams in baseball squaring off with everything at stake. What more could you want? Oh, I know — an end to the stupid, counter-intuitive MLB blackout policy that will keep me from watching these games. That would make it perfect. Happy baseball, my friends.