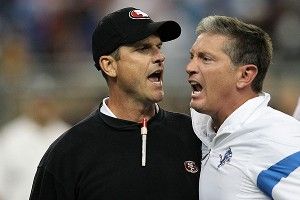 We’re off to a great start. Probably my best ever. If you took my prop bets last week you’d have ended up 33,500 jermajesties* in the black. (Trust me, first-timers — that’s good.) Not to mention, I was 4-1 against the spread in the Hilton contest. And 17-1 in the Econolodge Contest. (Totally made that up.)

This will not continue. But maybe … just maybe … I can squeeze out one more week of my prognostication prowess before it all goes to crap.

Panthers will score over 24 points vs. Saints

Until they prove me wrong, wagering on the over against the putrid Saints defense is the way to go. I don’t know what it is with these guys. It’s almost like they need some sort of extra incentive to play well. Like if they were to get a bonus for super intense play or something. I’ll figure it out. 20,000 jermajesties

You have to think he has redemption on his mind after last week’s celebratory missed dunk attempt on the crossbar. Poor guy. As if his unfortunate initials aren’t enough to contend with. Big Vern — you have exactly one more week to prove to us that you’re not white. 3,000 jermajesties

If you heard me on The B.S. Report this week you may remember I predicted my beloved Cowboys would be leading 16-3 in the fourth quarter before allowing a Leon Washington punt return for a touchdown. I pray this wager wins in some other fashion. Dez on a fly pattern? Please? 10,000 jermajesties

There will be NO score in the first 7:30 of the Raiders/Dolphins game

The best part about making this bet is, at the very most, you’ll only have to watch this game for seven and a half minutes. 5,000 jermajesties

I hate putting too much stock in Week 1 (or the preseason), but I’ve become really impressed with the Falcons and the way their no-huddle offense moves up and down the field. Also, Peyton Manning is no slouch when his surgically repaired head is covered by a dome. This one has potential to be a track meet … but with footballs instead of stupid batons. 2,000 jermajesties apiece

That would be better.

32,500/1 odds that as they approach each other Schwartz and Harbaugh are both run over by drunk Lions defensive tackle Nick Fairley, who somehow managed to commandeer a motorized gurney

That would be best.

Over/under 350,000: Shares of Jerry Wipes the Cowboys will up end up giving Giants running back David Wilson after the product goes public

He’s going to need something to dry up those tears. If you hadn’t heard, the Virginia Tech alum supposedly cried after fumbling against Dallas last week, which made this die-hard big D fan very, very happy. All weeping aside, it’s refreshing to see a player who cares that much about his livelihood these days. Even if he has to look like a rejected contestant on The Bachelor while doing it.

Who will catch more kickoffs in Mile High Stadium this year — the Broncos kick returner or the kid with the smock carrying balls five yards behind the end zone? Smock-wearing lad (-350)

Next to the intentional walk and check-ins with Fox “rules analyst” Mike Pereira, the Mile High kickoff is the biggest waste of time in sports.

Over/under 6.5: The number of flat-screen TVs I end up tossing a remote control through this year while enduring Cee Lo Green’s Thursday Night Football opening theme

That bet goes way over if I happen to be at a Best Buy for kickoff.

75/1: Odds that this season the entire Fox NFL pregame show crew will actually pick an underdog as their upset special

Ironically, these guys all choosing an underdog would be the upset of the year. Last week Jimmy Johnson picked the Chargers to surprise the Raiders. Only problem is, at the time, San Diego was favored by one point. Hey, Fox: How about you dip into that billion dollars you make off these NFL games and buy your morning crew a New York Post?! The team on the right side of the spread … that’s your underdog! And if that number is less than three — don’t bother insulting the rest of us degenerates.

This may go down as the funniest moment in sports talk history. To be fair to Mike, he no longer has the natural alarm clock of Mad Dog Russo yammering next to him at record-high decibels.

Over/under 6.5 days: The time it took to convince my son that WWE commentator and legendary wrestler Jerry Lawler’s heart attack was real and not part of Monday-night Raw’s entertainment itinerary.

Take the over. Sill trying to convince him. Turns out that “cry wolf” thing can be a real a mother—-er. Get well, King.

175,000 to 1: Odds that while playing Joe Paterno in the upcoming biopic Al Pacino reprises his famous line, “Say hello to my little friend”

Instead of staring directly into the camera, rumor has it Pacino has already perfected the art of looking the other way.

Over/under .5: People who actually learned something watching Cousin Micki’s explanation on why football is called football on Jimmy Kimmel Live

“Gentlemen, before we start this new league we’re going to need a … how should I say … fancier word for soccer … I got it … football! Just fancy enough, but not too fancy! Perfect! Start printing the T-shirts.” Picking up where her father — my Uncle Frank — left off, my Cousin Micki is a national treasure.

[Obligatory weekly explanation: A “jermajesty” represents the fake name given for a dollar amount. It is also the unfortunate name of one of Jermaine Jackson’s sons.]

The Best B.S.: George Brett on His Best Basebrawls