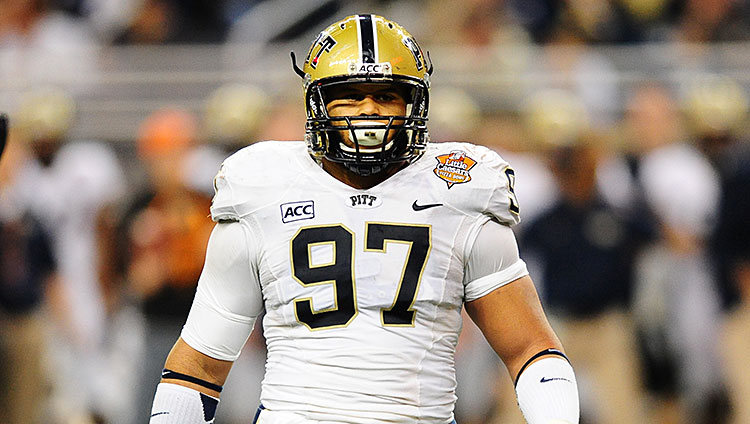 Right about the time we learned that Houston would own the first overall pick, everyone’s first thought was what Jadeveon Clowney would look like next to J.J. Watt. As the second round of the draft gets set to start tonight, the Texans are still badly in need of a quarterback, but that need wasn’t pressing enough for them to pass on a once-in-a-long-while pass-rusher. By pairing Clowney with Watt, Houston takes a quarterbacking-eating monster and puts him with the league’s best defensive player.

The downside to this is obvious. Choosing to bolster a position where they were already talent-heavy means passing up on the chance to fill a more desperate need. But the benefits are there too. It’s hard to imagine Watt being much better, but there’s a good chance Clowney will help him get there. Double-teams turn to single-teams. Game plans built around stopping one player have to be thrown out the window.

Adding strength to where you’re already strong is a way to build identity in a way good teams often do. Sometimes, it’s better to be very good at one thing than just OK at several. It’s a view several teams took in yesterday’s first round. Rather than fill glaring needs at some of their weakest positions, they chose to build up what might already be considered a strength. Along with Clowney (who is in a class by himself and is no. 1 on this list), there were five more that stood out as my favorites.

As a Bears fan, when the Giants passed on Donald at 12 to pick Odell Beckham, I almost threw my chair through my wall. In a good way. Very few people had linked Donald to the Rams. The Rams have very real needs! They could use a safety, a corner, definitely a big wide receiver. Instead they made a pick that improves what is already one of the best pass rushes in football.

Donald had 11 sacks during his senior season at Pitt. Putting him next to Robert Quinn will be enough to have Carson Palmer clutching his pillow in terror a couple of weeks a year. Quinn is comfortably the best pass-rusher in the league right now. Donald, Michael Brockers, Quinn, and Chris Long give the Rams a defensive line made up entirely of first-round picks. At 325 pounds, Brockers is a very different player than the 290-pound Donald. While Brockers can be a block-eating interior presence, Donald’s main role is tearing shit up. He’s as disruptive as defensive linemen come, and with all of the help he’ll have on that line, he should see plenty of one-on-one matchups with totally overmatched guards.

The Donald pick is a perfect example of how strengthening what seems like a stacked position can be a form of filling another need. There’s a good chance the Rams find some secondary help Friday and Saturday, but with the pass rush they’re set to have, their need to cover just got a little less important. Quarterbacks are going to be running for their lives against this team. It’s almost unfair.

Drafting a guard is about as far away from drafting Johnny Manziel as a team can get. The Cowboys took an interior lineman in the first round last year in a move that was widely panned because Travis Frederick was considered a third-round pick by some, but it worked out beautifully. Frederick was one of the better centers in the NFL as a rookie, and with Martin, Dallas is really starting to build a very good offensive line.

It starts with Tyron Smith, who is a rock at left tackle and is just 23 years old as he starts his fourth year in the league. If the Cowboys choose to use Martin at left guard, that left side of Smith, Martin, and Frederick is downright scary. Dallas already had one of the better running games around last year (it was fifth in rushing DVOA, and DeMarco Murray finished first in DVOA among running backs). Murray’s health is always a concern, but whoever’s running the ball for the Cowboys should have no trouble finding room. This is a team still in desperate need of defensive talent, but with Martin, it has a real chance to turn into the league’s best offensive line in the next few years.

I had a particular interest in where Cooks landed after spending some time with him in the lead-up to the draft. There probably wasn’t a better place he could have landed. The Saints were in need of a receiver, and Cooks can fill a host of different roles in that offense. With 4.33 speed and a knack for playing bigger than his 5-foot-10 frame in traffic, he can play receiver on the outside, but he also has the open-field talents to do a lot of what New Orleans would have been missing without Darren Sproles. Cooks scored 17 touchdowns in his final season at Oregon State, and each of them seemed to come in a different way. I can imagine Sean Payton frantically scribbling down ideas while he was watching Cooks’s film.

New Orleans has been home to high-powered offense since Payton and Drew Brees came to town, but the futures for a lot of their offensive pieces are up in the air. Jimmy Graham’s contract situation will need figuring out after this year, and Marques Colston will be 31 next month. In Cooks, they get a 20-year-old, do-it-all weapon for the final few years of Brees’s career. And in New Orleans, Cooks gets a Hall of Fame quarterback and arguably the best offensive coach of the decade. Most of the other receiver-needy teams in the draft were middling pass offenses needing a spark. This is a team looking for its next star.

I wasn’t very familiar with Bucannon before the draft, aside from knowing he was a likely second-round pick. After watching a little more of him since the Cardinals made their pick, it’s easy to see what Steve Keim envisioned. Bucannon is a punisher. He’s a sturdy 210 pounds and isn’t afraid to come down into the box.

Arizona quietly brought in Antonio Cromartie this offseason as its complement to Patrick Peterson at cornerback. With Bucannon at strong safety and Tyrann Mathieu roaming the field at the other safety spot, the Cardinals could have one excellent secondary. This is a team that already had the second-best defensive DVOA in the league last year. If I wanted to nitpick, I’d say it still needs another pass-rusher, but that’s really the only hole left on this defense. The two best defenses in the NFL resided in the NFC West last year, and I wouldn’t be surprised to see it happen again.

Just a heads-up to anyone in my keeper fantasy league: Matthew Stafford won’t be available for auction this year. I’ll be keeping him around. Detroit already picked a first-round tight end in the Megatron era, but the only thing Brandon Pettigrew and Eric Ebron have in common is the position listed next to their names. If the Lions weren’t going to be able to pull off a trade to move up and pick Sammy Watkins, Ebron was probably the best possible piece to go along with Calvin Johnson.

Ebron wore no. 85 at North Carolina, and it was appropriate considering how much of a Vernon Davis vibe he gives off. Ebron isn’t anything close to the blocker Davis is, but he is a real threat in the middle of the field who runs a sub-4.6 at 250 pounds. With Megatron holding safeties to his side of the field, Ebron should have a ton of room to work down the seam in offensive coordinator Joe Lombardi’s new offense. Lombardi’s last gig was as the quarterbacks coach in New Orleans. I’m sure he learned a little something about how to use big, mobile tight ends.