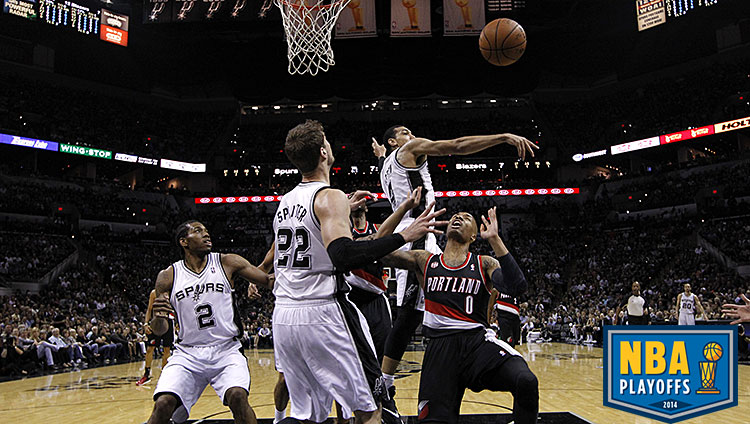 netw3rk: Dame Lillard is one of my favorite players and the Blazers have been fun, but the chairs at the grown-ups’ table are just too tall. The Spurs are, of course, an ultraefficient machine marvel of a basketball team: intersecting lines, constant motion, a crushing vision of perfection. The court is 94 x 50, the rims are 10 feet high, and the objective is to put the ball in the basket. How teams approach those parameters is pure philosophy, and no team manages to turn broad conceptual ideas like “sharing” and “movement” and “selflessness” into real-life, displays of athletic execution like the Spurs. When the machine is humming, as it was in Game 1 and for much of Game 2, to look on it is to wonder how it can ever be stopped. They make playoff basketball look like a simulator.

Portland averaged 25 3-point attempts per game this season, third most in the league. So, naturally, the Spurs have throttled the Blazers’ deep game, holding Portland to 16 attempts in Game 1 and 18 in Game 2. That’s what the Spurs do: hone in on an opponent’s strength, smother it, and force the team to come up with something else.

Meanwhile, Spurs Dad diversifies. After Tony Parker sliced through the Blazers for 33 in Game 1, Terry Stotts went with Wes Matthews on him. And, hey, it kinda worked early on — Tony shot 1-of-6 in the first quarter. Problem: Kawhi Leonard went 5-of-6; Tim Duncan is doing the same freeze-dried fundamental shit he’s been doing for 10,000 years; Parker eventually woke up; and the Spurs went into halftime up 65-39. Cut off one head, two more shall take its place.

And so, here is reason number 2,567,345 the Spurs are boring: Ghostface Lillard is one of our most exciting young point guards, LMA’s Round 1 performance was a midrange cheat code, and the Blazers have been one of the best stories of the playoffs. But Dad won’t let these young kids eat.

Danny Chau: Kevin Garnett taught us. He taught us all that, if your will is strong enough, you can crack the intangible forces that govern the sport. Rhythm, momentum, symbolism — they can all be vanquished. KG taught us to deny the existence of dead plays. Even the most futile plays are alive with meaning — finding it just requires an overactive imagination, and a genuine desire to tick people off.

Has there been a more meaningless scoring attempt in these playoffs than Deron Williams’s layup with 23 seconds left in the game? After blowing by LeBron James, Williams scooped into the air a dainty little layup to cap a miserable night. But hey, at least he’d gotten himself on the board, right?

Wrong. Dead wrong. Chris Bosh was all alone in the lane, eyeing the trajectory of Williams’s drive and then the ball’s. With a slight turn of the hip, Bosh got right under the ball and smacked it off the backboard. The Heat were up 12. There really wasn’t any need to do anything. But what really separates a layup in the final seconds of a game out of reach from a legally meaningless shot taken after a whistle? Bosh was just doing what he was taught.

Garnett wasn’t on the floor for the play. He had a largely ineffective game guarding Bosh, one of the last of the Next Kevin Garnetts (Garnett’s current teammate Andray Blatche might’ve driven the genre to extinction). Bosh nailed his twist on “The Garnett.” It’s a unique aspect of KG’s legacy that’s being preserved, though I’m sure KG would’ve appreciated the gesture more under different circumstances.