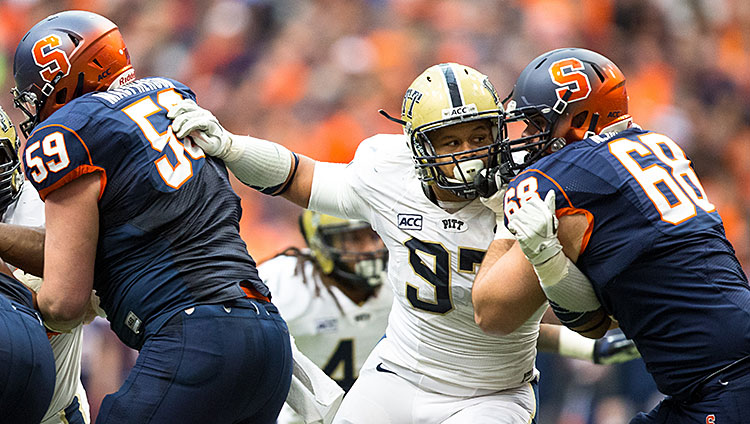 There are dozens to choose from, but there is one play from Aaron Donald’s remarkable senior season that stands alone as his favorite. It was early in the first quarter against Duke, with the Blue Devils driving. On a second-and-10, they ran an option play in the red zone. As the guard lined up across from him pulled, Donald knifed into the backfield. Rather than make a choice between running back and quarterback, Donald swung his right arm around one and his left around the other, dragging both to the ground four yards in the backfield.

“I didn’t realize I did it until we watched the film the same night,” Donald says now. “I caught the pull, got through the pull, and got the QB and the RB and tackled them at the same time. I saw it and was like, ‘Really?’”

A lot of people found themselves saying “Really?” while watching Donald’s final season at the University of Pittsburgh. He took home every major award a defensive lineman can win: the Outland Trophy, the Nagurski Trophy, the Bednarik Award, and the Lombardi Award. Donald led the nation in tackles for loss, with five and a half more than any player in the country. His 11 sacks were good for 12th in FBS; again, he plays defensive tackle.

There was just one major concern, according to draft folks: He was too small. At just 6-foot-1, 285 pounds, Donald lacked the ideal size for an NFL defensive lineman — not bulky enough to play tackle, not long enough to play end. Despite being the most productive defensive player in college football, Donald was penciled into the second round, a typical landing spot for successful college players with one glaring NFL flaw.

When the draft process actually started up with the Senior Bowl in late January, that concern fell by the wayside. Donald dominated an entire week of practices in Mobile, Alabama, against the best senior offensive linemen in the country. Nearly every account of the proceedings listed him as the most impressive player there.

“It’s a résumé,” Donald says of his Senior Bowl week. “I’m making a résumé for myself, trying to get that job at the next level. It’s always good to show that what you’re doing is who you are, what you see on film in the regular season is what you’re seeing at the Senior Bowl.”

The Senior Bowl carries a lot of weight come draft time because it’s actual football; Eric Fisher parlayed his excellent week of practices into being the no. 1 overall pick in the 2013 draft. The combine is not actual football, but for some players, it’s still a chance to do something athletically eye-popping that coaches (who are just getting their hands into the draft process) fall in love with. Donald wasn’t considered a player most expected to have that sort of combine weekend in Indianapolis, but if you can’t tell, there’s a theme developing here.

Donald ran a 4.65 in the 40. He finished second among all defensive linemen in the bench press. He won, again, and by the time it was over, the coaches talking to Donald were done asking what he couldn’t do. “You’ve got to have positives and negatives about you,” Donald says. “I think that’s a good negative, that the only thing they could say about me is my size. When they saw me at the Senior Bowl and the combine, size wasn’t a big deal to them anymore.” Instead, there were suggestions that Donald may fit roles he hasn’t even tried, like standing up as a linebacker on early downs. “That’s something I’ve never done before, but when you start running a 4.6 at 285, 290 pounds, teams start thinking, What else is he able to do?”

No one has checked off the draft boxes quite like Donald has in the past three months. He’s moved from the second round to the middle of the first round to a possible top-10 pick. But the most impressive part of that résumé he alluded to is still the season he put together as a senior.

This video is 11 minutes’ worth of highlights; there isn’t a two-yard gain in the bunch. The best part of Donald’s game, which isn’t a surprise after that 40, is his initial burst off the line of scrimmage.

That play isn’t even real, and it’s one of about five from that game.

Donald’s senior season was the culmination of everything that happened during his four years at Pitt. His college career saw three head coaches, three defensive line coaches, and three schemes. Some players might be frustrated with the constant turnover, but Donald actually saw it as a way to diversify his skills. “Coach [Greg] Gattuso my freshman year was my pass rush, getting off the ball,” Donald says. “Coach [Todd] Graham was more run stop, working on your fits. With Coach [Paul] Chryst, back to the old 3-tech, getting upfield.” As a junior, Donald’s sack numbers dipped from 11 to 5.5, but his tackles for loss actually took a jump. His goal in his final season was to combine the two, and that’s exactly what happened.

In his final campaign as a Panther, Donald wanted to be better prepared for the double-teams he knew were going to be thrown at him. He occasionally still struggles with knowing when to dig in and absorb blocks for teammates rather than shooting upfield in search of the big play. “You’ve just got to learn when to take that chance and when not to take that chance,” Donald says. “On first and second [down], you look at the tackle’s split, and when you’re thinking double-team, you want to anchor down.”

Passing downs, though, is where Donald will make his money for whatever team drafts him. Despite the suggestions of moving him around to different positions, Donald is about as true a 3-technique tackle as anyone can find. People are already throwing out the Geno Atkins comparison (one Donald appreciates), and his favorite part of any game is still coming out of the huddle on third down. “The best is when you get up there to the line and you know you’re going to get that one-on-one,” Donald says. “That’s just a whole different feeling.”

Do You Believe in the Bolivian Soccer Ghost?