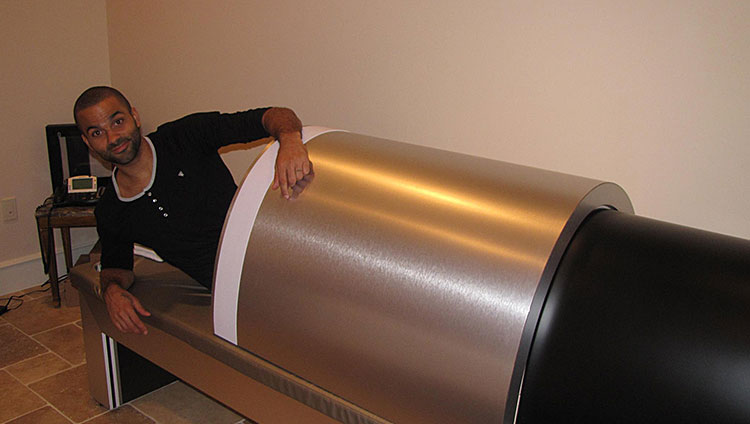 The most upset I have ever been about anything in my whole entire life was when the Spurs got mollywhopped by the Pistons in Game 4 of the 2005 NBA Finals.

That was the year when San Antonio jumped out to an easy 2-0 lead in the series (I seem to remember it winning both games by something like 300 points). Then the Spurs got smoked in Game 3, which I definitely expected. But then in Game 4, they got blown out again, and I definitely was not expecting that one. I was just so crushed. Like, it was a legit rattling of my psyche.

I’ve probably thought about that moment six or seven times every year since then, particularly whenever the Spurs have lost in the playoffs. But then I watched this video and now I don’t feel bad about that loss or any other loss that’s happened or any loss that will happen:

That’s from a TV show that former Spurs big man Fabricio Oberto has, apparently. I guess the show is like MTV’s Cribs (or, this episode is at least). In the video, Fab gets a tour of Tony Parker’s house. Until this video, I had not realized that Parker had earned more than $100 million playing basketball.

Tony Parker Has a Recovery Tank

It’s like one of those hyperbaric chambers to help his body heal faster, and that’s just perfect. He says his mom got it for him in France. Tony Parker and his mom have a good relationship, for sure.

I like to think there was maybe a time when criminals broke into his last house and went into his trophy room and Parker saw it and was like, “NO, THIS CAN NEVER HAPPEN AGAIN. GET ME THE FINGERPRINT SECURITY PEOPLE ON THE PHONE RIGHT NOW!”

And then, like eight weeks later, the same crooks break into his new house and they go straight for the trophy room. They get there and are like, “Ha-ha, we got him again!” But then they see the fingerprint security lock and just panic and start trying all of their fingers but none of them work. Then the camera pans back and we see Parker watching the whole scene play out on a security camera, and he’s like, “… Yessssss.”

The 2007 championship ring is in the trophy room. He takes it out (that’s the year Fab won the title with them). It has the team’s 16-4 playoff record on it. I’d forgotten they went 16-4 on their run that year. The most exciting thing that happened during those playoffs: Dirk Nowitzki and the Mavericks getting Baron Davised out of the postseason in Golden State. There’s nothing I like more than watching Dirk lose. (That was the year after he beat the Spurs in Game 7 in San Antonio, the second-most devastating loss in Spurs history. I didn’t have the strength to tear even one shower curtain rod out of the wall; that’s how bad it was.)

He has them in his trophy room. They’re on the same shelf as his Finals MVP trophy. That’s the second-most Tony Parker thing I’ve ever heard of.

Note: I was surprised (and disappointed) he didn’t have his rap album in a case in the trophy room. That’d have been an extra-clutch move.

The Incredible Hulk and Iron Man

He has a theater in his home that has full-size statues of Hulk and Spider-Man. That’s the first-most Tony Parker thing I’ve ever heard of.

“Explain me what is this.” —Fabricio Oberto

This is a common mistake for people whose first language is Spanish-based. I’ve taught English as a Second Language students in Houston for the last eight years. I’ve probably heard this exact sentence 17,000 times. I smiled a lot as soon as he said it. I just really love Fabricio Oberto a lot.

America is so dope.

While Tony and Fabricio walk over to a separate garage (you don’t only have one garage, do you?), Tony stops and opens a gate that lets two small dogs out. He very clearly says that their names are Blanco and Oprah. It’s subtitled in Spanish as Blanco and Opera. Fabricio Oberto’s TV show doesn’t have super great production value.

When they get out to the second garage, Tony opens it up and shows Fabricio a DeLorean. He asks if Fab knows what it’s from. Fab is like, “Yeah, Back to the Future.” For maybe two straight hours after watching this I kept seeing Fabricio watching Back to the Future with someone in my head, and every few minutes he’d turn to the other person and sya, “Explain me what’s happening right now.” God bless Fabricio Oberto.